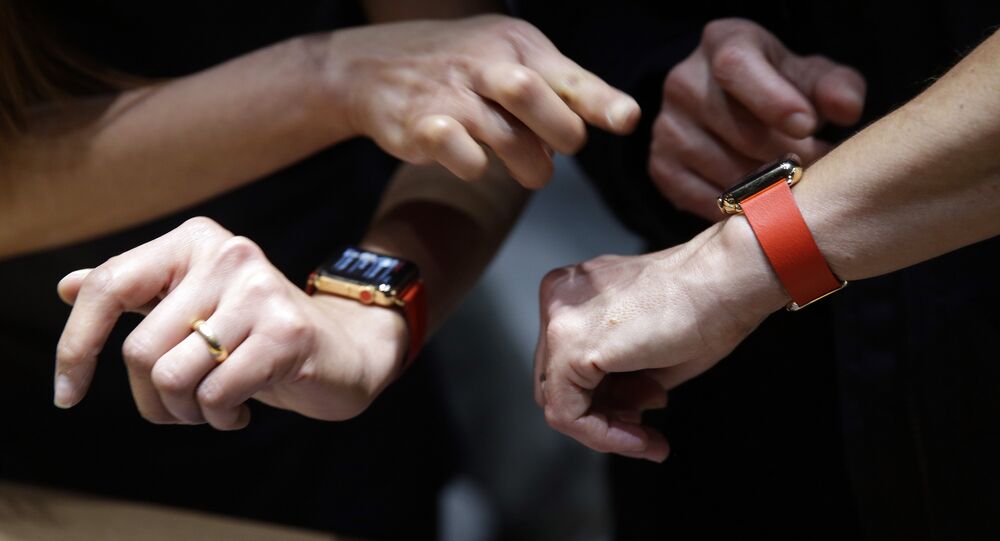 The tech giant Apple has revealed plans to introduce a range of new features for its Apple Watch this week, including software updates from sleep-tracking to hand washing reminders, most of which were targeted to all consumers.

Margarietha Scheepers, a senior lecturer of entrepreneurship and innovation at the University of the Sunshine Coast, believes that the roll-out of new features for Apple Watch heralds more functionality in the wearable market.

Sputnik: How does a pro-hygiene watch work?

Margarietha Scheepers: It sounds a bit like a gimmick, but according to the announcements Apple's made at its Worldwide Developers Conference, this particular watch offers automatic hand washing detection and so it means it's in the iOS app and it means that when you come home or you've been out, the watch will know when you come home with your GPS location and it will prompt you then to wash your hands.

When you're washing your hands, the watch has got motion sensors on, the mic is activated, and a 20-second timer... and it's timing you and making sure you know you've got enough soap. If you stop beforehand, it will remind you to keep going until the 20 seconds are up and it actually records all of this in the Health app, very much like your steps, so at the end of the day you can actually have a look if you've sort of met your hand washing goals I guess.

Sputnik: Will this revolutionise the smartphone market?

Margarietha Scheepers: Yeah, that's right. We're seeing a move away, with this watch, from just smartphones to our younger consumers who are on the move and dynamic and really don't want to carry this big, heavy phone around. So, they're a lot more into the convenience of a watch and suddenly we're seeing a lot more functionality on the watch in this wearable market that we've been hearing a lot about. The watch faces can adapt to your own needs, so that would be really easy; for example, if you're into dancing, it can monitor that for you.

There are watch faces for cyclists, or for surfers called "Dawn Patrol", or for new parents called "Glow Baby". What we're really seeing is a market shift; we'll probably see much more growth in the watch market than in the smartphone market and the big players in this wearable market for watches are Apple, Samsung, Fitbit, and Garmin. We're seeing voice activation play a much bigger role and personalisation, that this watch will store all the information on you and you can set it up so that it fits your lifestyle.

Sputnik: Will this be one of Apple's most important strategic moves of the past decade?

Margarietha Scheepers: We're seeing the phone as this wearable market, where they're going now, but I think probably one of the biggest announcements at the conference, which was expected, is that Apple is breaking up with Intel. They've decided to take their MacBooks and in the Mac use sensors that they're using in the phone and the watch. I think that's one of those big announcements that were made at the conference. A lot of the other announcements at the conference were focused on their developers and engineers that work on their platform, so we're seeing Apple really focusing on the artificial intelligence and performance in terms of the components like the chip that they have now inside all of their products. But a lot of the announcements were on all of their operating systems.

So, this is for the iOS 14 system that runs across a lot of their devices and really there was a lot of focus on developer programmes and tools and resources that they provide to their developers. We see AirPods that are now improved, digital car keys for BMW are coming and I think we'll see more product updates coming probably later in the year, but this conference primarily at Developers is sort of these early stages where they are co-developing with the developers to give greater functionality to the consumers that use Apple's products.

A lot of their products are just incremental improvements, but bigger than that, we see the strategic move - there's been a long doubt of what will Tim Cook really do. Steve was such a captivating figure and so I guess the interesting thing about Apple is they're not just thinking through their products, which is often what we see and experience, but they've changed their App Store, the streaming services are changing, so we do see them reconfiguring their business to fit the trends. That's sort of what we're seeing with the pro-hygiene watch as such. They've got a team of health experts and a lot of the stuff in the Health app is really interesting.