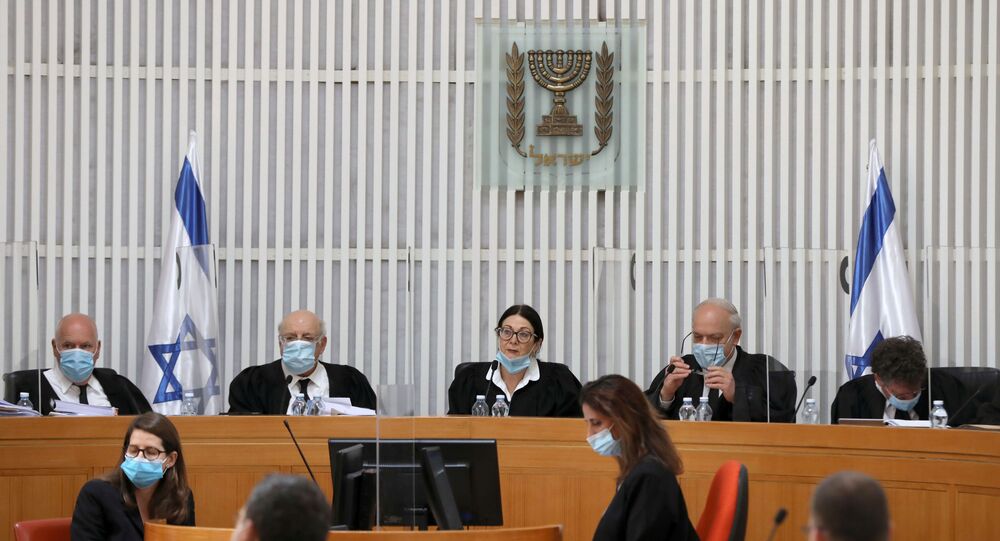 Prime Minister Benjamin Netanyahu is set to enter a courthouse as a defendant on 24 May with the Jerusalem District Court ruling Sunday that the trial that has been previously postponed due to the raging coronavirus will not be aired live.

Israel's prime minister, who was indicted last November, is facing charges of bribery, fraud and breach of trust in a series of graft probes that include buying positive press and receiving gifts from a rich donor. However, Netanyahu has refuted the allegations and denied all wrongdoing on his part.

The Israeli public, however, is not convinced. Even before Attorney General Avichai Mandelblitt announced he had decided to indict the PM, 48 percent of Israelis believed Netanyahu was corrupt with 55 percent saying they were not convinced by his statements, a Maariv poll found.

But when the indictment happened, public opinion turned against the judiciary, despite attitudes not having changed much in regards to Netanyahu. Many took to the streets across the country, protesting against Mandelblitt's move and expressing their distrust in the system.

That distrust has only grown with time. If in 2015 a poll found that 38 percent of Israelis didn't trust the judiciary system, a recent survey conducted by Israel Hayom, a newspaper associated with the country's right wing circles, found that there has been an increase in this tendency. Forty percent of Israelis polled said they didn't believe the High Court of Justice, while 46 percent of those asked expressed opposite views.

Bugs in the System?

Oded Modrik, a former vice president of the Tel Aviv District Court and currently a professor at Ariel University, explains these findings by pinning the blame on the nature of the High Court. Unlike ordinary courts that deal with civil and criminal cases, it is forced to interfere in sensitive political matters that often present a point of friction in a society that has long been split into two main camps: the right and the left.

"Professional judges do strive to detach themselves from their political views; in reality, however, it is very difficult. So when you don't know the political views of the judges [but you suspect that they are tilting towards the left], it becomes difficult to trust the system."

A year ago, another Israel Hayom poll found that most Israelis didn't trust the judiciary because of their belief the system was associated with the left-wing circles aimed at bringing Netanyahu down.

The survey revealed that 61 percent of respondents believed the President of the High Court Esther Hayout held centre-left views, which influenced her decisions. Similar findings have also been made about other key players in the system including deputy attorney general and the state prosecutor.

However, the judges' political views are far from being the only factor that has contributed to the sinking of the public's trust. The media has also played a pivotal role in turning Israelis against the system, says Modrik.

"I doubt many journalists read the decisions of the court, not only because they are difficult to understand but also because reading them requires time that many simply don't have. So when they write their articles and OP-eds, they do not necessarily reflect the reality but rather the beliefs of those who write them," explained Modrik.

A series of high-profile trials that have been handled badly by the system as well as the attacks of politicians have also elevated the levels of distrust.

The most recent example of such an assault was seen over the weekend when several members of the ruling Likud party opened a coordinated attack against AG Mandelblitt and the State Prosecution aimed at undermining their legitimacy ahead of the Netanyahu trial.

Are THE COURT'S DAYS Numbered?

For the past several years, Netanyahu and his loyalists have been leading a fierce campaign against Israel's judiciary institution, which allegedly sealed a written agreement with other elements of the left-wing camp to topple the prime minister.

In an attempt to prevent that from happening, politicians associated with the right have been pushing for a series of legislation aimed at curbing the country's High Court and keeping it in check.

The most notorious of these proposals was the intention of former minister Ayeled Shaked to cancel the special committee that is currently in charge of selecting the High Court judges and let politicians handle that job.

It is because of these and similar proposals, says Modrik, that the High Court, which has been vocal before on many political issues, has now preferred to lower its profile.

Recently, the Court decided to greenlight Netanyahu to form a government despite the repeated pleas of the left-wing circles that he be prevented from doing so. Similarly, it also ruled in favour of Okaying the power-sharing pact between Netanyahu and the Blue and White party chief Benny Gantz, a deal that Israel's left camp deemed illegal.

"The court has finally learned the lesson and understood that even though they have the power, they need to contain it because if they don't they will lose the public's trust and that will inevitably lead to legislation that will limit the system's powers, dealing a severe blow to the country's democracy."