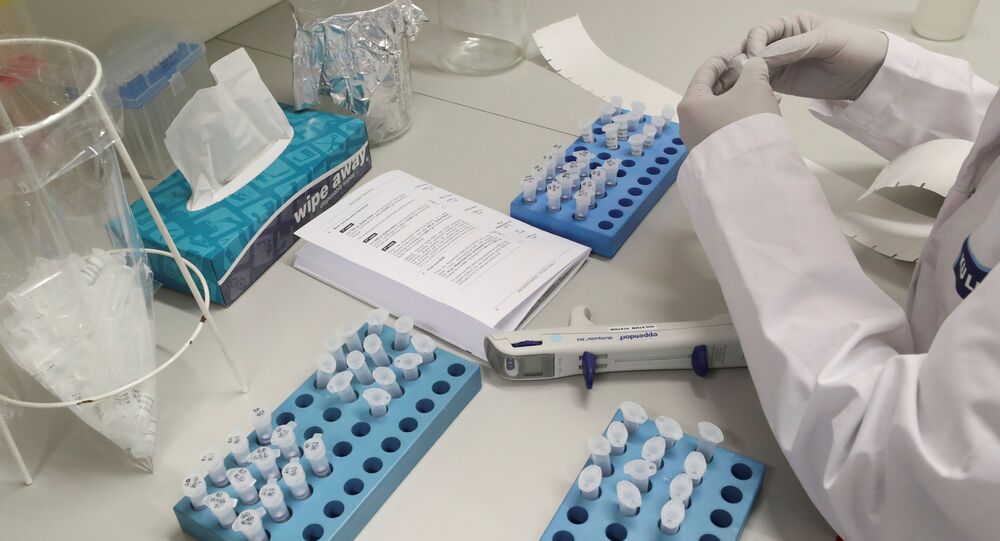 Having Failed to Contain COVID-19, US Doctors Must Look to Drug Cocktails for Cure - Biologist

Despite the fact that the US had months to begin preparing for a potential coronavirus outbreak within its borders, it sat idle, Chery, who is also the co-editor-in-chief of News Junkie Post and author of "We Have Dared to Be Free,” told hosts Bob Schlehuber and Jamarl Thomas.

“This business has been known in the US since January 10. The Chinese made the sequence of the virus available, and any lab, any biology lab in the world, could have tested for it [starting] January 10,” Chery noted. “But the US didn’t really start testing in earnest until very recently. They just sat there for more than two months and more or less did nothing.”

“At this point, we are not able to contain the disease by tracing it and doing epidemiology and so on, and therefore, people really do need to stay home. Really, isolation is extremely important. If this is not handled correctly, the virus might become a permanent presence. It might keep changing and become a permanent presence, and so people really need to be aware, to educate themselves, really be aware of the kind of policies that are being set up,” Chery said.

In a statement Monday, World Health Organization (WHO) Director-General Tedros Adhanom Ghebreyesus warned that the COVID-19 pandemic is continuing to gain speed.

However, according to Chery, the WHO is also fueling panic, because the number of cases will obviously increase as more testing is completed.

“There is panic going on, and I kind of expected this to happen. And the WHO, of all places, is really fueling this panic. The US is discovering more infections, and guess why: they are doing more tests. It’s that simple,” Chery told Sputnik.

There are two types of tests that are currently being used to detect the virus: one that looks for the virus and one that just looks for telltale signs of it.

“There is one, that’s the drive-thru or the color test or five-minute test, people [are] talking a lot about. I think it was started by South Korea. South Korea has really excelled at this, and now it’s being used all over the place,” she said.

“Now, another test is real-time, RT-PCR … this test actually detects the virus itself. Not only that, it detects how much virus you have,” Chery told Sputnik.

However, she cautioned that some treatments, such as vaccines, might not be as effective as hoped, since the virus will naturally continue to change as it spreads. As a consequence, it may take multiple kinds of drugs working in sync to effectively tackle the danger the virus poses.

“The virus makes three mistakes when it copies for every copy of new virus it makes. And this gives it the ability to adapt extremely quickly. Vaccines are not around the corner, and even if they were, they would be extremely expensive. These are vaccines that are being developed where they give people the spike protein that is on the surface of the virus, and then they’re supposed to raise antibodies against the spike.”

“But that’s just against one target. And you do not attack the virus with one target. You need to hit it with several things simultaneously … These trials where they are using one drug are actually dangerous. They may work a little bit initially, but eventually what we will get down the line is probably resistant viruses,” Chery explained.

It’s a lesson learned well by the US virological community during the AIDS crisis of the 1980s and 1990s, to which experts like Dr. Anthony Fauci, director of the National Institute of Allergy and Infectious Diseases and now a key player in Trump’s coronavirus task force, helped lead the response at the time.

Such treatments for COVID-19 include a drug called remdesivir, developed by Gilead Sciences, that failed to treat Ebola. However, the drug has been shown in studies to be effective at inhibiting the growth of coronaviruses similar to COVID-19, including severe acute respiratory syndrome (SARS) and Middle East respiratory syndrome (MERS).

A study released by the New England Journal of Medicine last Wednesday also found that a combination treatment of two drugs used against human immunodeficiency virus (HIV), believed to perhaps be a potential cure for COVID-19, was ineffective against the coronavirus. The researchers found that Chinese patients who received the treatment - a combination of the drugs lopinavir and ritonavir - did not show statistically significant clinical improvement of coronavirus symptoms compared to those who received standard care. However, the drugs were not tested against a placebo, which is considered the gold standard to determine the effectiveness of a new treatment.

“The other thing I perceive is that there are a bunch of pharmaceutical companies that want to make money by recycling … drugs that failed against things like Ebola and HIV. What will work, if we’re lucky to find it, and I think we may have found something like that, is a drug combination where you have two drugs that could attack the virus simultaneously,” Chery noted.

One such potential treatment which is showing promising results is the combination of the antimalarial hydroxychloroquine and the antibiotic azithromycin. According to a study by researchers at IHU-Méditerranée Infection in Marseille, France, patients who took those two drugs in combination “showed a significant reduction of the viral carriage” six days after treatment began and a “much lower average carrying duration” in comparison to untreated patients.

The researchers recommend that 200 milligrams of hydroxychloroquine be provided to patients three times a day for 10 days in addition to 500 milligrams of azithromycin on the first day and then 250 milligrams per day for five days for the treatment to be effective.

Another potential treatment, Chery pointed out, is “convalescent plasma,” in which plasma donations from survivors of the virus are directly infused into a coronavirus patient.

“It is possible that convalescent plasma that contains antibodies to SARS-CoV-2 (the virus that causes COVID-19) might be effective against the infection,” the US Food and Drug Administration wrote in a Tuesday release announcing approval of an emergency protocol that allows doctors to perform this procedure for critically ill patients who are at risk of dying.