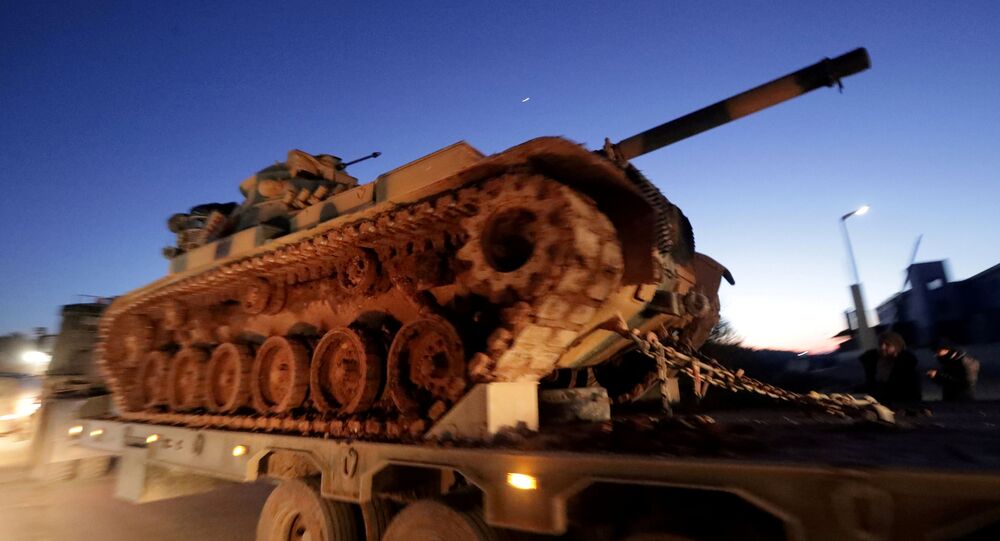 Ceasefire in Idlib to Hold, But Will it be Enough to Bridge Gaps Between Syria and Turkey?

Turkey's Defence Minister Hulusi Akar said there have been no violations registered in Syria's northern province of Idlib since Thursday, 5 March, when Ankara sealed a ceasefire deal with Moscow in an attempt to contain the conflict that displaced nearly a million people in three months in north-west of the country.

As the situation around Idlib, escalated, threatening to drag all the conflicting sides into a deeper crisis, President Recep Tayyip Erdogan flew to Moscow last week to meet with his Russian counterpart and establish new rules of the game.

The measures, which entered into force on 6 March, include an agreement to establish joint patrols of one of Idlib's two key highways (the M4), along which a Russian-Turkish security corridor will be established.

And this time around, thinks Yusuf Erim, a Turkish affairs analyst for TRT World who is close to governmental circles, the chances that both sides will adhere to the agreement are high.

"First of all, [the Idlib agreement presupposed that] Turkey is leaving behind a sizable deployment of troops to secure its area of control and be able to retaliate if Syrian forces violate the agreement. And, secondly, the Syrian army has absorbed huge losses so they don't have the capability to deal with Turkish troops. Assad understands the repercussions that would follow if he breached the deal", he said referring to Ankara’s claims that it has “neutralised” hundreds of Syrian soldiers.

In the end of February, 34 Turkish soldiers were neutralised by Syrian troops resulting in Turkey's decision to launch a full-scale offensive - operation Spring Shield - that claimed the lives of more than two thousand Syrian soldiers and dealt a severe blow to Syria's military equipment, Turkish sources said.

Turkish Defence Minister Hulusi Akar has justified the operation by saying that Ankara aimed at “putting an end to the carnage” it blamed on Damascus and prevent radicalisation and migration – an opinion shared by Erim, who suggests that Ankara’s involvement in Syria was dictated by purely "national security concerns".

"Ankara's first cross border operation into Syria in 2016 was to push back Daesh militants, while the operations in 2018 and 2019 targeted the YPG (Kurdish fighters considered terrorist by Ankara - ed.)," adding that Turkey took great care to avoid skirmishes with the Syrian armed forces. "However, allowing Idlib to collapse and watch a humanitarian disaster unfold on its borders was not an option."

Is Turkey a True Partner?

But not everyone agreed with this depiction of events. Dr. Nidal Kabalan, Syria's last ambassador to Turkey, who held this post for more than a year after the eruption of the Arab Spring in 2011, argues that Ankara has successfully disguised its "expansionist intentions" under the preface of fighting for human rights and democracy.

"They didn't come to Syria to protect civilians,” Kabalan said, adding that the real intention of Ankara was to fight President Assad. In doing so, the former diplomat thinks, Turkey supported various kinds of militants in the war-stricken country, ranging from moderates to extremists.

Since the eruption of the war in Syria nine years ago, Damascus has repeatedly stated that it was fighting terrorists who had flocked to the war-torn country from abroad to wage jihad.

Many, according to Syria, came from Turkey. In 2014, for example, the Combating Terrorism Center at West Point, a New York based think-tank, published research suggesting Ankara has not only turned a blind eye to its own citizens travelling to Syria to fight alongside the rebels linked to terrorist groups but has also helped foreign fighters to bypass the lax security on the Syrian border.

Ankara, for its part, denies these allegations: being one of the first countries that designated Daesh* and its branches as terrorist organisations, Turkey positions itself as a country that has eliminated over 6,000 Daesh-affiliated terrorists, more, it claims, than any other state.

In addition, Turkey has also collaborated with the international community to find political solutions to the ongoing  crisis, participating in various talks that aimed at protecting civilians and helping millions of Syrian refugees who had entered the country since the beginning of the war.

Refugees as Means of Extortion?

But in the case of the Syrian refugees, as in other cases, Ankara and Damascus agree to disagree.

Recently, Ankara, which is said to be hosting the largest refugee population in the world, including more than two million from Syria, decided to open its borders for hundreds of asylum-seekers who have amassed at the Turkish-Greek border in a bid to cross into Europe.

Turkey justified its decision by its inability to cope with the growing number of asylum seekers and accused the EU of violating a 2016 agreement, under which Ankara agreed to host thousands in exchange for financial support from Brussels – cash that was too little and came too late.

Reaction of the European bloc was quick to follow. It pointed a finger of blame at Turkey for using the issue as a “bargaining chip” in talks with Brussels and Syria's former ambassador believes Brussels couldn't have formulated it better.

"Refugees are only a tool in the hands of Erdogan to extort money from the EU," the former top diplomat said, while referring to the Turkish president's comments that his country needs some $40 billion to handle the crisis.

But for the Turkish analyst, Erdogan’s demands made perfect sense.

"Turkey has almost single-handedly been forced to shoulder the migrant crisis with very little outside support. Migration is not Turkey's problem, it's an international issue. The EU has had many opportunities to address the root cause of the crisis but it chose to stay silent. The situation has now reached a point where Turkey can no longer handle it by itself. If the EU will not support Turkey in its initiatives to create solutions inside Syria to curb the displacement of people - then it will have to face the consequences of its inaction," he summed up.

The EU, for its part, rejects Turkey's claims, saying the bloc has stuck to its 2016 agreement with Ankara, injecting billions of Euro to assist Turkey to finance schools, housing and medical centres for the refugees it hosts on its soil.