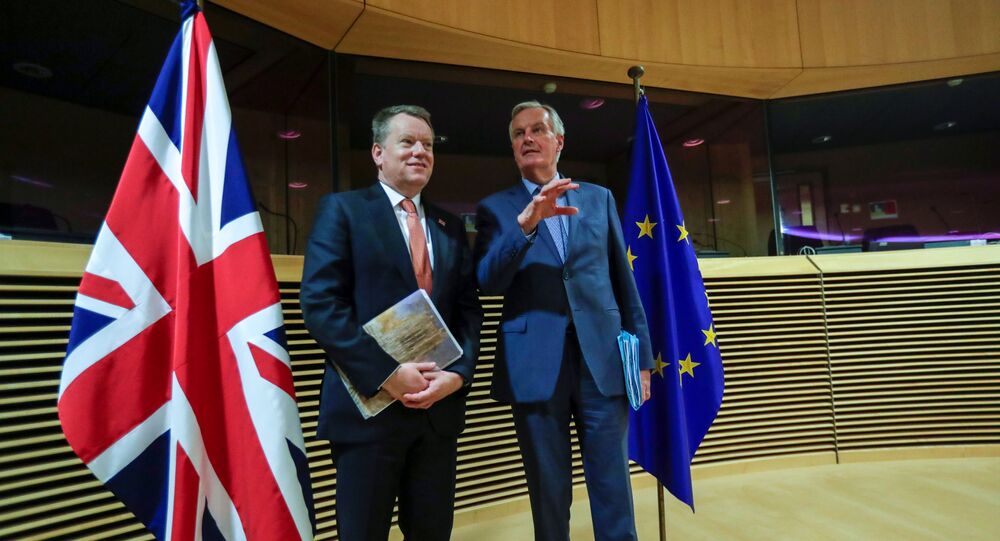 British Prime Minister Boris Johnson is set to publish a draft version of a proposed Canada Style post-Brexit free trade deal with the EU. But will either side be prepared to compromise when push comes to shove, in order to avoid the potential economic disruption that could be brought on by a no-deal Brexit?

Robin Tilbrook, Chairman of the English Democrats, shares his views on the Canada-style trade deal and on the potential impact of a no-deal Brexit for the UK and the EU.

Sputnik: Will the UK be able to agree a Canada style post-Brexit free trade deal with the EU?

Robin Tilbrook: The EU is making it very clear that they are going to be difficult about the Canada option, although at one time they were talking it up, and saying that it was a feasible option, and they are now adding all sorts of conditions to it, like allowing free access to the UK’s fishing waters, and I think that is under the influence of the French Government, which seems to be the centre of problems in terms of any flexibility by the EU’s negotiating team.

Boris Johnson stands a real risk of bringing his honeymoon period to an end if he is too weak with the EU in his negotiating. He started off with a fairly bullish sounding agenda, but there is only so much ground he can give before he looks like he’s the one that looks like he’s not doing the things he ought to be doing about looking after the UK’s interests.

Sputnik: Would a soft Brexit be a waste of time?

Robin Tilbrook: If the UK has continued free movement and allows the EU’s shipping fleets continued access to our waters, and they’ve got control of our armed forces and therefore much of our foreign policy; it’s difficult to see what really would have been achieved.

The EU, however, wouldn’t be part of our constitution in the way that it was, so it might be possible for a subsequent British Government to change the terms on which the relationship is ongoing, and that’s one thing that would have been achieved I think.

Sputnik: How much of an impact would a no-deal Brexit have on both the EU and the UK?

Robin Tilbrook: I think that the Government has been making very serious efforts to get ready for a no-deal Brexit, and I feel that it’s not going to be as bad a problem as most of the media seem to have made out, and the trading relationship with the EU was mostly in favour of the EU in a sense that we were buying more of their exports, than they were buying of ours.

The free movement of people meant that a lot of EU nationals came to the UK of course, but what wasn’t happening, was a full opening up of the EU’s markets to our products and services, so for instance; there wasn’t complete freedom to trade within the EU.

I’m a lawyer, a solicitor, and if I’d wanted to go and set up in Italy for example, they wouldn’t let me to even to practise English Law, so the markets are not as open as people who are arguing for the EU have been making out.

The loss of that access is not going to be as dramatic as it’s made out to be, and one of the things that have been shown about project fear in the EU referendum and since, is that whenever we’ve crossed a threshold that they’ve said is going to cause the entire world to collapse around us, nothing has happened.

A lot of what was being talked about is not going to happen, it’s not going to be the great sort of catastrophe that people have been making out, there might be some minor dislocations; but they would be worked out fairly quickly, it is after all not governments that trade with each other, it’s companies and private business.

One of the things that importers and exporters are very good at doing is finding the easiest way to manage whatever restrictions there are.