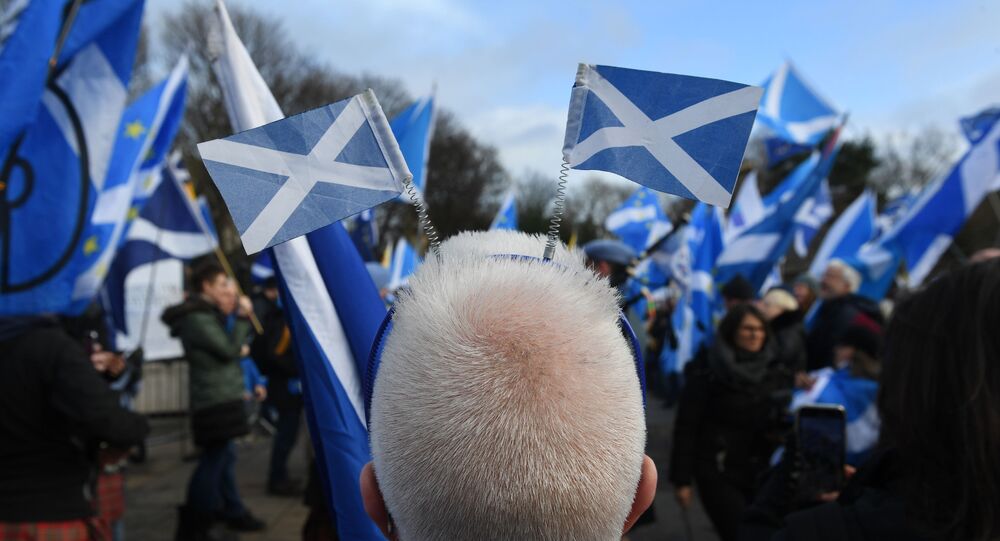 Nicola Sturgeon warned that many more people in Scotland will contract coronavirus after five new cases were confirmed in the last 24 hours. This approach from the First Minister is very different from the flippant attitude of British Prime Minister Boris Johnson who has so far underplayed the risk of the coronavirus.

Member of Scottish Parliament and author of "Radical Scotland: Uncovering Scotland's Radical History" Kenny MacAskill has shed some light on various leaders approach to the coronavirus and Scotland’s radical history.

Sputnik: What can you tell me about Scotland's radical history?

Kenny MacAskill: Well, the radical history starts off with a lot of revolutionary history, with the revolution in France. It ignited the passions of working people around the globe, and certainly in the UK and Europe. For the first time ever there was a living embodiment of a land that wasn't something in the never never or that you might go to when you died. The oligarchs, the rich, the establishment were overturned. Working people had the vote and working people were in charge. So the French Revolution ignited Scotland as it did in France and elsewhere.

Kenny MacAskill: Yes, I think it's changed as all societies have changed, because the economy and our society has changed in a myriad of ways. But there's still a radical streak in Scotland through many parties, not just my own. And I think that legacy goes back to the 1790s, to Thomas Muir and the martyrs who were transported. In this book and in previous books we have seen how it's come on down through the generations. The 1821 insurrection, the bicentenary of which we'll celebrate this year. That was founded upon people who had been inspired and indeed some who'd been involved in the 1790s in support of Muir. When the 1820s Martyrs those who weren't hung and beheaded came back from Australia. They were feted by the Chartists you picked up their mantle. They in turn were picked up by Keir Harvey and the ILP and by Right Clyde side and so it's got the SNP likes to think that it picks up the radical mantle, and the "Yes" campaign certainly did.

Sputnik: Now this week we have seen both Scotland and England approach the oncoming threat of the coronavirus. While, Boris Johnson seemed to underplay the risks, Nicola sturgeon made it pretty clear that we should be prepared for a rapid rise in cases. Why do you think the two leaders took such different approaches to this crisis?

Kenny MacAskill: I just think it's like lackadaisical attitude Boris Johnson takes to everything when he was Foreign Secretary. It was a disaster. We see that with the poor woman that rests in a prison, although I think she may be given some respite, in Iran. He's a man who simply aspired for office, not with the intention of doing it because he thought it was a god-given birthright. Nicola Sturgeon is very capable and competent and doing what I think not only for Scottish First Ministers should do but doing what other national leaders are doing across the world.

Sputnik: Do you think the fact that she was so frank and so forthcoming, could be even seen as part of this radical Scottish identity, especially in the same world leaders are being a lot more opaque?

Kenny MacAskill: I think it's two separate issues. One is historical: the radical tradition comes out in a variety of ways. Nicola's is handling all of the Covid-19 viruses more simply don't have competence and capability and she's been through it before with swine flu, which thankfully back when I was still serving the cabinet didn't touch us to the same extent and wasn't going as wide or as global as this latest coronavirus. But she's been through it before, she knows what has to be done. And as with all things that she does, she's capable, confident and very, very articulate. And it's important that we get the message out to our people.

Sputnik: The issue division is often brought up in reference to contemporary Scotland. But you recently wrote an article claiming that the United Kingdom and England was more divided. Could you elaborate more on the idea for us?

Kenny MacAskill: Well, suggesting that Scotland was deeply divided by the referendum is utter nonsense. There was some disputes and egg was thrown. Around the world, people looked at Scotland with some envy as to how to carry out a constitutional debate of huge passion and significance. Meanwhile, England because of social-economic changes, economic decline, in many regional areas that are deeply divided country, people in some areas in the north of England do not recognise the England that now exists in other parts, especially the Midlands or south's views and attitudes. I don't know how they're going to pull it together. It's a tragedy because this is a country I know and greatly like. But England is a deeply divided country. We've seen it on Brexit because passions were high in the independence referendum, but it was conducted with respect and indeed peacefully. The Brexit campaign has unleashed monsters in England, and it's a deeply divided society.