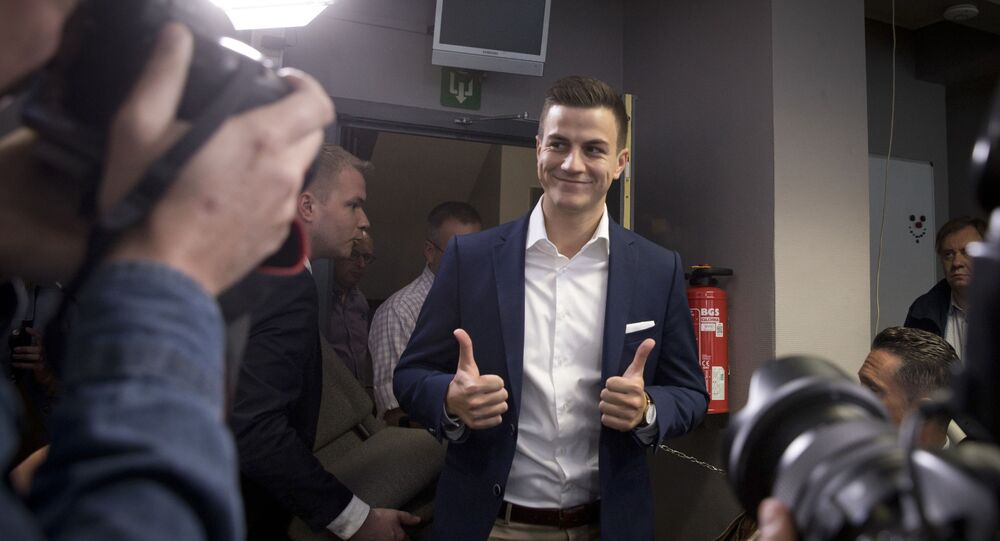 'We Will "Drain the Swamp", Kick Out Corrupt Politicians' – Belgian Flemish Right-Wing MP

Belgium’s Flemish Interest is making a major leap forward in the polls, as ratings of the right-wing party continue to soar following the 2019 federal election. If the trend continues, the party's opponents may have to stop boycotting it.

Flemish Interest (Vlaams Belang, VB) managed to secure 18 seats out of 150 in the country’s Chamber of Representatives in May of 2019. The party emerged from the “Flemish Block” – a right-wing movement that was dissolved following a 2004 High Court ruling on the “permanent incitation to discrimination and racism".

Since the early 2000s, VB has changed its rhetoric somewhat, abandoning some of the 70 goals that were originally in Flemish Block's 1992 anti-immigration plan. Even though the party still stands by its anti-immigration agenda, the most controversial statements in the plan, such as “the return of the 2nd and 3rd generations of foreigners”, did not make it into Flemish Interest’s list of priorities.

Leaders who were associated with the Flemish Block before 2004, such as Filip Dewinter, either stepped down, while remaining honorary members of Flemish Interest, or became the new party’s representatives in EU institutions, which was the case with another party veteran, Gerolf Annemans.

By the fall of 2019, the party, led by 33-year-old Tom van Grieken, managed to become the largest political force in Flanders, with approval ratings of more than 27%.

One right-wing activist, whose name is associated with the party and whose popularity skyrocketed in 2019, is Dries van Langenhove – a 26-year-old independent politician who joined the “Flemish Interest” group in the Belgian parliament after securing a seat in the 26 May federal elections in the constituency of Flemish Brabant.

Van Langenhove is the founder of "Schield and Friends" – a controversial right-wing conservative Flemish youth movement from Ghent, which, according to Belgian mainstream media, was responsible for sharing sexist, racist, and anti-Semitic memes on the Internet.

According to Van Langenhove, who is a vocal critic of “leftist policies”, Flemish identity is under threat, and key issues for his country are globalisation, mass immigration, and other trends that are favoured by the country’s current government:

“Anywhere you go you get the same shops, the same clothes, the same language – everything has to be the same because of globalisation”, Van Langenhove said in an interview with Sputnik. “I’m more in favour of local habits, everything local – local identity. It doesn’t mean, of course, that we can’t have a world where there is travel and trade all across the globe. But globalisation, and such, is a threat to local identity. But also, of course, a major threat, the biggest threat, is massive immigration coming from third world countries, coming from the Middle East – people who have no similarities with our culture at all. Most of them are impossible to integrate”.

Flemish Interest was actively involved in the 2018 protests against UN Migrant compact. Party members rallied in Brussels and projected their message onto the walls of the Belgian Prime Minister's residence. https://t.co/6nJBu1GBRg

​Nationalist movements are currently on the rise in a number of EU countries, including Belgium’s neighbours such as the Netherlands, where Thierry Baudet’s “Forum for Democracy” won a majority of seats in the 2019 provincial elections, or nations that are further away from Flanders, such as Italy, where Matteo Salvini’s Lega remains the most popular political force despite the coalition government collapsing after M5S deserted them.

The situation with Flemish identity in Belgium, however, is different, according to Dries van Langenhove, who says that pressure from European globalists as well as domestic factors are at play, such as historic fault lines between the Flemish and the Walloons:

"I think Flemish nationalism is special because we’re not only under threat from globalisation, from the European Union – just like French nationalists are, like German nationalists are, but we’re also under threat of the Belgian government, the Belgian state. Even though the Flemish are a majority in Belgium, the French-speaking minority has always been in charge. They have always had all of the highest posts of public office, there were people, not so long ago, being convicted in our country because [they] could not present their arguments in court in their own language".

According to Dries van Langenhove, the rising popularity of Flemish Interest may very well trigger further changes in the country’s political landscape. As the party gets more votes, other key political players won’t be able to continue ignoring the calls of Flemish Interest to abolish the 2004 “cordon sanitaire” agreement.

“We are becoming the biggest party by far”, says Van Langenhove. “We are surpassing 30% of the votes, which is historic, it’s a very big achievement and we may even get higher [percentage] when the next election comes. So, I’m not only hoping for the 'cordon sanitaire', which is an agreement between other parties not to cooperate with Vlaams Belang, I am not hoping for it to break away – I am sure it will break away. I’m 100% sure it will break away because with democracy you can’t escape the votes, you can’t escape the will of the people".

Van Langenhove also shared his views on the 2024 elections, saying that the next Flemish election may very well bring closer together the country’s two right-wing parties – the centre-right N-VA (New Flemish Alliance) and Flemish Interest:

@DVanLangenhove to @SputnikInt on lifting of “cordon sanitaire” placed by other parties against Flemish Interest: “It’s very realistic, and I’m hopeful that in 2024 Vlaams Belang will become “incontournable” – that means that they cannot form any government without @vlbelang.”

​Van Langenhove is currently one of the most controversial figures in Belgian politics. In June last year, he was suspected of breaking Belgium’s laws on Holocaust denial and racism, as well as gun control regulations. His house was searched by law enforcement and his gadgets were confiscated. The leadership of Flemish Interest stood by the politician, saying that he’s “innocent until proven guilty”. Van Langenhove himself says that the probe was an attempt to intimidate him and an act of “state terrorism” against him and his relatives:

Many journalists representing Belgium’s mainstream media have been critical of Van Langenhove. In May of 2019, Sigrid Spruyt, a former anchor of Journaal – the main news programme on Belgium’s public VRT channel, wrote that the station “must definitely ban Van Langenhove” from its studios. That same week, VRT was accused of removing the politician’s name from its list of most popular Belgian politicians based on Google search results.

“Dries van Langenhove: In Belgium we have a special situation where there is public media, that is openly sponsored by the state. They get about 300 million Euro, which is a lot for Belgium, of subsidies every year. This public broadcaster is very-very-very leftist.” pic.twitter.com/9txXKNF6hN

Van Langenhove often paid with the same coin, slamming VRT on social networks, where he has tens of thousands of subscribers.

“Of course, nowadays we have social media, we have a direct line of communication with the voters, with our people, with 'our folk'", Van Langenhove said. “And that’s very important, of course. Now leftists realise this and they are doing anything they can to censor us on social media, in the European Union, on the federal level. A few weeks ago the people of the Green Party were saying that there will be laws against so-called 'hate speech' on Facebook. But, if we’re going to allow communists and extreme leftists to define what is hate speech and what is not, then anything that comes out of my mouth will be 'hate speech'".

“The fight for Flanders starts now” – a slogan, which is very popular among Dries van Langenhove’s subscribers on social media. The politician's Facebook page currently has 71k subscribers. His Telegram account got 500 followers in the first 24hrs. pic.twitter.com/5rnvaMdcWh

Just like many European nationalists, Belgian nationalist movements, including the Flemish and the Walloons, welcomed Donald Trump as the US president, using Trump-style rhetoric to attack political opponents. According to Dries van Langenhove, the establishment senses that time is running out, and the next electoral cycle will be decisive:

Belgian political parties are known for being divided into linguistic groups – Dutch-speaking ones, Francophone parties, and German-speaking parties. Some of them, like Flemish Interest, are basing their ideology on protecting regional economic, cultural, and political interests.