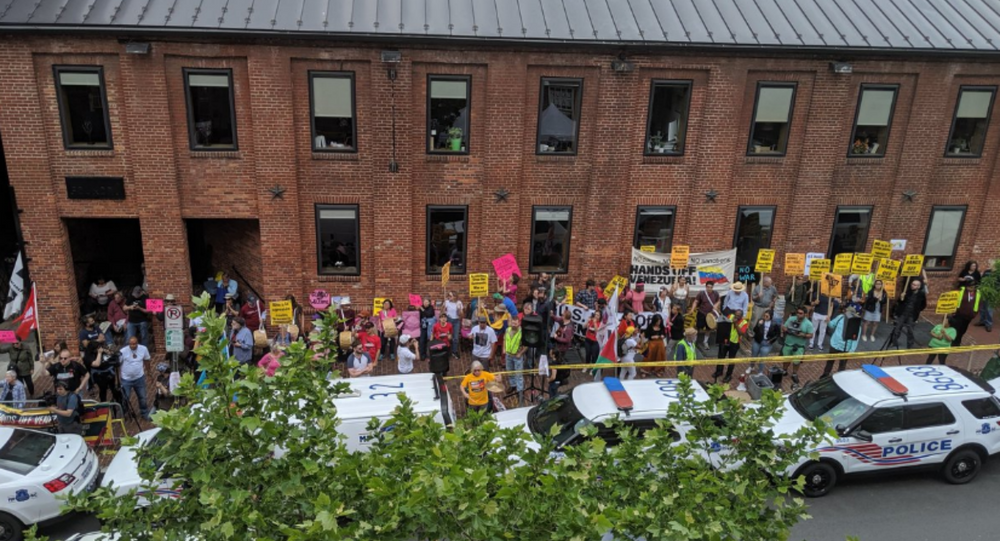 Four Embassy Protection Collective members, who defended the Venezuelan Embassy in Washington, DC, May 2019 from the Venezuelan opposition in favor of the attempted US coup against Venezuelan President Nicolás Maduro, are now being charged in a US federal court - but won’t be allowed to argue the primary facts in their favor, they told Sputnik.

Kevin Zeese and Adrienne Pine, two of the four Embassy Protection Collective members facing charges, joined Radio Sputnik’s by Any Means Necessary Friday to discuss why the US government is putting their group on trial for protecting the Venezuelan Embassy and how the prosecution is basing its case on the legal fiction that Venezuela’s self-proclaimed "interim president,” Juan Guaido, is indeed the leader of the country.

“The collective formed last spring to protect the US embassy from takeover by people who support a coup in Venezuela, and we were there for 37 days. In the last two weeks, we were surrounded by a pro-coup mob, under siege. Our water was cut off, our electricity was cut off … and we were finally arrested on May 16. And we are now facing federal criminal charges,” Zeese told hosts Sean Blackmon and Jacquie Luqman. “We are being charged with unusual charges: interfering with protective function. And so we go to trial beginning of next week, February 11.”

The 37-day defense of the Venezuelan embassy by the Embassy Protection Collective started on April 10 and ended in May when US Secret Service agents forced their way into the building in a SWAT-style raid and arrested the four remaining activists: Zeese, Pine, Margaret Flowers, and David Paul.

At its height, dozens of activists hailing from an array of anti-war groups, such as Code Pink, Popular Resistance, the ANSWER Coalition and the Black Alliance for Peace, were sleeping in or meeting at the embassy on a daily basis. While the Venezuelan diplomats had left when their visas expired, Caracas officials said the activists could remain in the compound as their guests - caretakers of the grounds until the diplomats were allowed to return by the Trump administration.

However, Washington holds that Maduro’s government is illegitimate, and so did not recognize the authority of Caracas officials to permit the activists’ presence. When Guaido’s appointed envoy to Washington, Carlos Vecchio, requested the US Secret Service remove the activists, the police obliged, turning the compound over to the coup plotters along with other diplomatic offices in the US.

“A defense committee has formed around our prosecution. If you go to defendembassyprotectors.org, you can get more information about this case, and they formed because they see this as bigger than the four of us … this affects our right to challenge US empire. If the US is involved in the regime change coup and then it fails, and then the US starts to give the property to the failed coup, that’s an unprecedented step,” Zeese explained.

Zeese told Sputnik the quartet’s hearing last week took four hours and that Washington DC District Court Chief Judge Beryl A. Howell made abundantly clear she would rule against them.

“After that hearing, she was convinced enough that she was not ready to decide. And it took her until two nights ago … we finally got her decision, and the decision was mostly a victory for the prosecution, but there was some success for us. We got more than we started with,” Zeese said.

The activist noted that the Embassy Protection Collective members under trial will not be able to state that Maduro is the legitimate Venezuelan president, nor will they be able to discuss the fact that the US-backed coup against Venezuela is a violation of the Vienna Convention - the key facts underpinning their case.

“What we did win was that the court agreed that for us to be found guilty, the prosecutor has to prove that we were knowingly and willingly violating the law. Now that means that our mental intent … was to break the law. While we can’t say Maduro was president, we can say we believed that the Maduro administration gave us permission to be in the embassy, and we were there without trespassing. We had a key, we weren’t unlawfully entering … We still have a defense, because they have to prove beyond a reasonable doubt that we were ... willfully violating the law,”  Zeese explained. “In our view, we did not commit a crime. We were in the embassy lawfully.”

During the Embassy Protection Collective’s occupation of the Venezuelan embassy, the US government allowed a paramilitary force of fascist Latin Americans to assault the protectors and activists.

“They were basically functioning as the shock troops, the paramilitaries for the US government, for the Secret Service and other federal police forces that were there, in that the federal police knew they could not violate the Vienna Convention,” Pine, an anthropology professor at American University, told Sputnik. “They eventually did, but they were really hoping that these people would really serve their function to starve us out and scare us out.”

“So, this group consisted of people who had high level military clearance, who had serious paramlilitary training, and they were racist, homophobic, transphobic, threatened us with rape, threatened us with all sorts of violence and actually comitted acts of horrific violence against both people who were on the inside in the embassy - using strobe lights directly inside our eyes to try to blind us - and people who were on the outside of the embassy. At one point, they strangled somebody who was trying to do a food delivery. He sustained nerve damage and is still walking with a cane. They attacked a man trying to deliver toothbrushes to us,” she noted.

“And this is an important point: any time they attacked people, it was our supporters, it was the Embassy Collective on the outside that got arrested,” she noted.