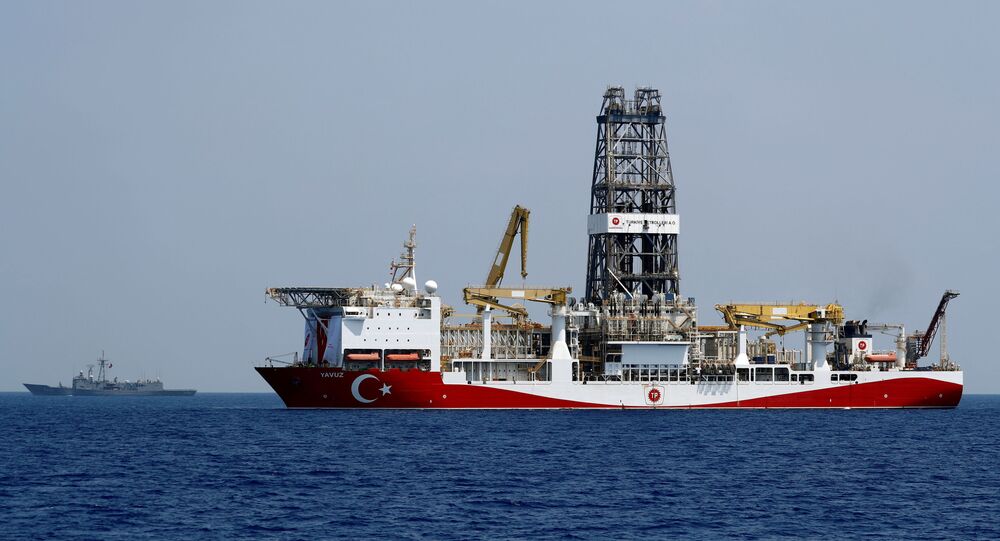 In early January, Greece, Cyprus, and Israel agreed to construct the EastMed pipeline to bring natural gas from Israel’s Leviathan field and Cyprus’ Aphrodite field to Greece and then on to Italy and the Balkans.

Talking about Turkey’s foreign policies, such as its agreement with Libya over gas fields, Turkish journalist and political analyst Sefa Karahasan said that Ankara’s activities could deprive South Cyprus and Greece of 'all their acquisitions' in the region.

He noted that Greek Cypriots are extremely concerned about Turkey’s “proactive” foreign policy, which shifts the existing balance of forces in the region. According to the political analyst, the agreement between Greece, Israel and Cyprus on the construction of the EastMed gas pipeline “is the result of these countries’ concern and their desire to take diplomatic steps against Turkey, which has actually checkmated them by its agreement with Libya.”

Karahasan pointed out that the implementation of the EastMed gas pipeline project is extremely unlikely, and the countries supporting this project are aware of this.

“In fact, both Israel, South Cyprus, and Greece know that the chance to implement this project is negligible. The urgent ceremony of signing the EastMed pipeline agreement is linked to these countries’ desire to demonstratively respond to the Turkish-Libyan maritime boundary delimitation agreement; to a greater extent it was just a demonstration event. For example, Italy understands this, and therefore didn’t even take part in the signing ceremony. The EastMed project requires $15-20 billion worth of investment to generate $10 billion worth of income. Today, when the balance of power is actively changing in the Eastern Mediterranean, the likelihood of its implementation is almost zero,” Karahasan said.

According to Sefa Karahasan, no country in the region could have predicted Turkey’s actions in Libya.

“It’s obvious that, having signed an agreement with Libya, Turkey has radically changed the alignment of forces in the Eastern Mediterranean; and, in fact, has checkmated the regional players. Greek Cypriots are trying to take some steps together with Israel and Egypt, which Turkey has tense relations with. However, by gradually agreeing with other countries of the region, Turkey will continue the process launched by its agreement with Libya. The diplomatic steps that Turkey will take may deprive the Greek part of Cyprus and Greece of their current positions and acquisitions in the region. Of course, the situation is causing serious concern for South Cyprus. Meanwhile, disagreements between Israel and the Greek Cypriot community are ongoing over the rights to operate the Aphrodite field. Given this situation, if Turkey manages to overcome tensions with the countries of the region, it will have the opportunity to take a completely different position in the region,” the expert explained.

In turn, Faruk Loğoğlu, an ex-diplomat and former Turkish ambassador to Washington, noted that, despite the significance of the Turkish-Libyan maritime boundary delimitation agreement, this “belated step should be complemented not only by a military, but also a diplomatic component.”

For this reason, according to Loğoğlu, Turkey should come to the negotiating table with the countries of the region as soon as possible, starting with Egypt.

“What is Turkey doing today to protect its legal rights? It has launched drilling operations in southern Cyprus, but under the protection of the Turkish Navy. It’s quite natural that it is sometimes necessary to assert one’s rights through military might; but in this case, Turkey was forced to do so because it hadn’t used diplomatic methods. The situation here could have turned out differently; the current policy is erroneous, since it is belated. If you try to figure out exactly where the mistakes have been made, it’s worth starting with establishing relations with Egypt and Israel. The opportunities that Turkey can provide to the Eastern Mediterranean countries, Syria, Palestine, Lebanon, Israel and Egypt, far exceed the resources that Greece and Southern Cyprus can offer them. If Turkey realizes this, it will be able to protect its rights and interests through diplomacy, and not by force,” Loğoğlu concluded.