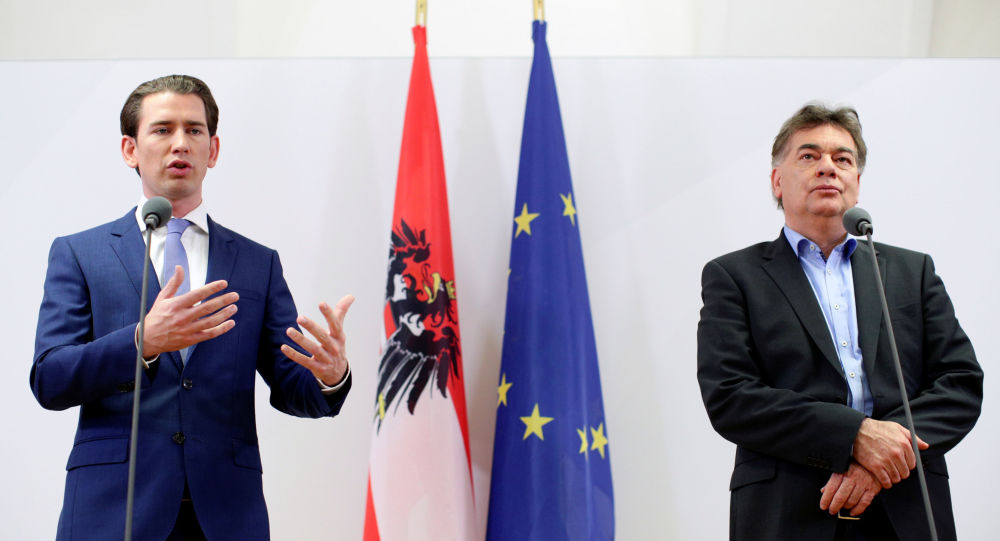 The leader of Austria's Conservative People's Party, Sebastian Kurz, is en route to resume his chancellorship after he announced a new coalition deal with the Green Party on New Year's Day.

Bill Ravotti, moderator of the V4 Report and a political analyst, believes that Sebastian Kurz will lose much credibility with the new coalition.

Sputnik: Is it likely that the OVP will find any common ground with their ideological opposite, the Green Party, given the collapse of the right-wing coalition between the OVP and FPO?

Bill Ravotti: Yes, this is not about ideology anymore, but positions of power within the EU framework. (Just look at the Grand Coalition in Germany.)  One has to remember that there was enormous pressure from the “Old Guard” OVP and Angela Merkel’s EPP Party for Kurz to dump the FPO. Berlin and Brussels have long worked (via the CSU and EPP) to blackball defenders of the nation-states (nationalists) by preventing the centre-right from forming coalitions with the right. When the Strache scandal occurred, this gave Kurz the perfect opportunity to break from the FPO.

Remember, it was not the FPO that caused the collapse of the coalition, but Kurz who made impossible demands on the FPO, particularly expelling Herbert Kickl as interior minister, despite the fact that he was very effective at tackling illegal migration and had nothing to do with the scandal.

So while the sly Kurz plays the victim, there was a plan in place. With the election of Donald Tusk, the EPP has decided to move leftwards and the EPP Party has been crystal clear that they are willing to work with left-wing Greens and Socialists, but not with groups on the right led by the PiS of Poland (ECR) and Matteo Salvini (ID).

Apparently, the EPP had given Kurz an attitude adjustment... and one will see more of these coalitions between the EPP Party and far-left Greens across the EU. Germany may be next.

If national conservatives on the right want positive change, they will not find it within Berlin’s EPP regime. Viktor Orban and Fidesz have no choice but to leave.

Sputnik: Where the climate change issue could be formed into a compromise, the debate about migration seems to be much more complicated. Austria is one of several countries that did not support the UN migration pact. How will the new coalition agree on this and many other contentious points?

Bill Ravotti: Kurz will not reverse this because it’s really irrelevant and Kurz can deploy it as a campaign slogan for the next election. If the EU wants to endorse and follow the UN Migration Pact (and they do), then they will find ways to enshrine it into EU regulation so that every member state will be obliged to follow (like the Green Deal Manifesto). The EU is rapidly moving towards majority voting and expanding its power and scope, so the new EU migration reform will be based on the UN Creed of “safe, orderly and regular” migration. The new EU ministers are quite open about this.

They will give “lip service” to Frontex troops and managing borders, but they have been putting on this theatre for five years. It’s designed to give so-called conservatives like the CSU of Bavaria (Merkel’s "show opposition" in Germany) and Kurz political cover while trying to prevent the Matteo Salvinis of Europe from gaining traction.

Sputnik: Green leader Werner Kogler said right after the September elections that the next government would need to see "radical change from the right-wing policies pursued by the previous coalition”. On what issues do you think the Greens will be able to promote their agenda? How will their popularity among the left change after a coalition with the OVP?

Bill Ravotti: The Greens have been upfront.  They want a more EU-compliant government based on EU solidarity. I call this groupthink, but it is a big emotional victory for EU federalists and the new Grand Coalition (Greens, EPP, Socialists, Renew Europe) now ruling the EU from Brussels.  They have their people in place in the new EU Commission and have basically blackballed Salvini, the PiS of Poland and the right.

The one thing that can change this stranglehold is the exit of Viktor Orban from the EPP, which is why they have not expelled him to date. They want to prevent Orban from a coalition with the PiS and Salvini.

Sputnik: How do you think this coalition will affect the SPO, the country's main opposition party?

Bill Ravotti: Kurz will lose much credibility with this coalition; even at this young age, he already has a reputation as a government opportunist willing to do or say anything to keep power. Eventually, Kurz and the OVP will be the losers.  If the Greens grow in popularity, they could end up forming a coalition in future with the Socialists (SPO) and Guy Verhofstadt’s NEOS Party.

Maybe, in time, real conservatives will realise that they will need to work with the right... or they will be wiped off the map.