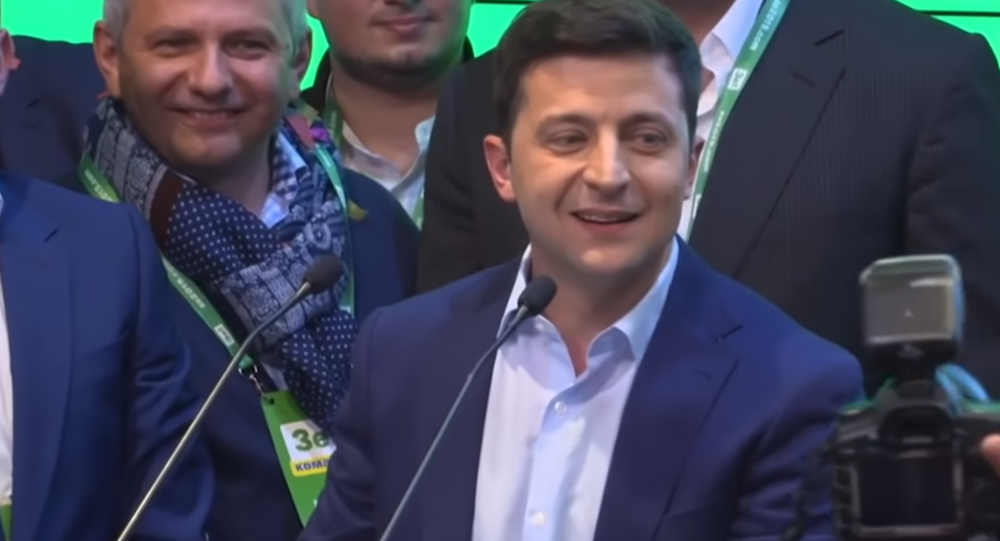 Just minutes after taking office Monday, Ukrainian President Volodymyr Zelensky asked parliament to dissolve itself and call a snap election. A political analyst told Sputnik the move was an attempt to clear out a hostile legislature and get Zelensky’s party seats, but it’s unclear how much voters were for him, versus against the outgoing leader.

Zelensky won a surprise landslide election last month against then-president Petro Poroshenko, who had been in office since 2014. The 41-year-old comedian rode a wave of unrest and dissatisfaction, although he's a newcomer to politics and his fledgling party has no seats in the Verkhovna Rada, the Ukrainian parliament, which remains dominated by Poroshenko's "Solidarity Bloc."

© AP Photo / Jesco Denzel/German Federal Government
Merkel Says Postwar Order Over, Calls on Europe to Unite in Face of US

"The government didn't do anything for them to feel themselves Ukrainians," Zelensky said in his opening address to the Rada. "I am not afraid to make difficult decisions. I am ready to lose my popularity, my ratings if needed, or even my post as long as we achieve peace."

Among other promises, Zelensky said he hopes to achieve a lasting peace in the five-year-long conflict in eastern Ukraine, where the government has been locked in a war with two breakaway states.

In a further effort to shake up the political sphere, Zelensky sought the resignation of Defense Minister Stepan Poltorak and Vasyl Hrytsak, head of the Security Service. Prime Minister Volodymyr Groysman also said he would resign.

These were just the first shots of a "coming war" between the isolated president and a hostile parliament, Mark Sleboda, an international affairs and security analyst, told Radio Sputnik's Loud and Clear Monday.

​Zelensky also asked the Rada, over the next two months, to pass a number of measures implementing key parts of his campaign promises, including the abolition of parliamentary immunity, establishing criminal liability for illegal enrichment and adopting an electoral code that would open electoral lists for Rada elections. These are measures that Sleboda noted "according to the polls, a large majority of Ukrainians approve of."

"The Rada is composed of politicians who are largely hostile to the new president. He does not have any parliamentary representation because he doesn't have a party as of yet. I mean, on paper he does, but he doesn't have any elected yet to the Rada, which is why he does want early elections, so that he can begin to do something of what he wants. The majority of parliament, the largest bloc in parliament, is the Petro Poroshenko bloc, which is opposed to him. The second-largest party is Yulia Tymoshenko's party, "Fatherland" [Batkivshchyna], which is also opposed to him, and so on. They're going to make his life very difficult."

The analyst noted that, even though a key partner in the ruling coalition had pulled out, the Ukrainian constitution won't allow the president to dissolve the Rada for 30 days, nor can he dismiss it more than six months before its own elections.

"So, you see the catch that's been made here: they made it impossible for the president to dissolve parliament," Sleboda said, "at least until they're ready to do so."

Sleboda said that Zelensky's measured words about how achieving peace in the Donbas might cost him his job showed just how weak and isolated the new president is.

However, he noted that "the polls show us that the people of Ukraine want the war to end, and they're ready for him to do it, a plurality shows, on terms that are in agreement with the [September 2014] Minsk Accord, which the last government signed but then completely ignored and did not fulfill their requirements from, which includes federalization for Donbas."

"He's given some statements that he might be willing to move in that direction, but that is, as of yet, unclear. He has not laid out a platform for making peace with Donbas, other than he's willing to push the Normandy format, although he wants to try to include the UK and the US in that," Sleboda noted. The three nations that formed the Normandy group in June 2014 to attempt to resolve the growing war in Ukraine were France, Germany, Russia, which met with representatives from the new Ukrainian government that had come to power as a result of the coup d'etat earlier that year.

The war in eastern Ukraine has been "frozen" for years, since the industrialized, Russian-speaking-majority areas in the east of the country revolted against the new nationalist government in Kiev in the spring of 2014, following that government's attempts to remove the Russian language's status as a national language in the country. Two proto-states emerged: one in the Donets River basin based in the city of Donetsk, and another to the north, centered on the city of Lugansk, both of which fought the Ukrainian government to a standstill.

"Almost every night, there's an exchange of artillery shells and small arms on both sides, for the last few years now, leading to a casualty count of a couple hundred on both sides a year, and probably double or triple that injured," Sleboda explained. Since April 2014, the war has claimed over 13,000 lives.

Sleboda said that Zelensky's power depends heavily on Ukrainian voters continuing to follow the motives that led to them voting against Poroshenko. "Whether they'll now vote a new party into existence in force… large enough to control parliament, whether it's in one month, two months or six months."

"Plus the new parliament is going to be incredibly fractured. Everyone and their brother — including Zelensky — is declaring a new party to run for parliament," Sleboda said, noting how numerous political figures have introduced new groups, and existing parties have split. "There's going to be a lot of politicking and king-making to decide what is the coalition that will emerge, how people vote and who is going to control the parliament and how much they will work with the new president," Sleboda said, noting the odds were against Zelensky.