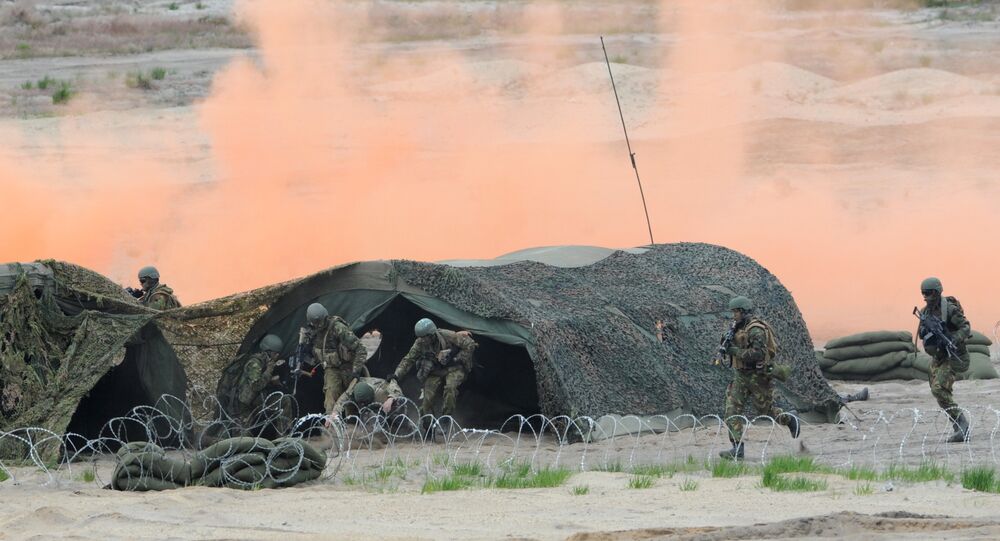 Vladimir Sudar - The so-called Kosovo Army’s participation in NATO military drills in Croatia, according to a Serbian military expert, is a demonstration of the continuity of the policy that the Western centres of power have been carrying out for years in the Western Balkans against Belgrade.

In honour of the 10th anniversary of Croatia's accession to NATO, international military exercises will be held in the country in May and June that include representatives of the armed forces of the self-proclaimed Republic of Kosovo. The first "act" of the three-stage military manoeuvres of the North Atlantic Alliance's "Immediate Response 19" was launched on 10 May. It will be followed by the Astral Knight 19 and Swift Response 19 exercises, organised by the US European Command (USEUCOM).

The first phase of "Immediate Response 19" will last until the 6th of June. The manoeuvres will be held inside Croatia itself, as well as neighbouring Slovenia and Hungary. Some 1,600 soldiers from the aforementioned countries, as well as from the USA, Great Britain, France, Germany, Italy, Poland, Lithuania, Albania, and Montenegro will take part.

© AP Photo / Ralf Hirschberger / dpa
US Military Begins Series of Joint Exercises in Europe - EUCOM
Also joining the drills will be non-NATO "friendly countries" — Northern Macedonia (the protocol on the country's admission to NATO was signed on 6 February but still has to be ratified by the parliaments of all 29 member countries of the Alliance and the parliament of Northern Macedonia itself — ed. note Sputnik), Bosnia and Herzegovina (due to a disagreement among the representatives of Bosnian Serbs, Croats, and Muslims after last October's elections to the Presidency of Bosnia and Herzegovina, a Cabinet has yet to be formed in the country — ed. note Sputnik) and partially recognised Kosovo.

The next phase of the military drills, the US Air Forces' Manoeuvres in Europe (USAFE), is to be held from 3 — 6 June. "Immediate Response 19" will be held at different locations in Croatia, Romania, and Bulgaria throughout June.

© AP Photo / Vadim Ghirda
Deadly Dust: US Spreading Radiation and No One Wants to Raise the Issue - Author
According to the Croatian Ministry of Defence, 750 Croatian military personnel, 450 representatives of NATO countries and "partner countries", 60 aircraft, 30 helicopters and 800 ground vehicles will take part in the exercises.

The former head of the Serbian Military Security Agency General Momir Stojanović believes that these exercises and the participants speak volumes about how relations between East and West on the Balkan Peninsula have deteriorated.

He recalls that neither the Kumanovo Agreement nor UN Security Council Resolution 1244, the documents recognised by the international community, determining Pristina's legal status and powers, in fact, do not allow Kosovo to have  its own armed forces. According to General Stojanović, however, this has not prevented Western forces from condoning their formation (the Kosovo Parliament decided to convert its Security Forces into a full-fledged army on 14 December 2018 — ed. note Sputnik) or also inviting such an illegitimate army to participate in NATO exercises.

"I believe this is NATO's answer and above all the USA's, to the military parade in Niš (on 10 May, in the presence of Serbian President Aleksandar Vučić, a military parade was held in Niš in the south of Serbia with the participation of Serbian and Russian military equipment — ed. note Sputnik), to restore the balance and make it clear to Kosovo Albanians that NATO is the guarantor of their security, despite the fact that Kosovo is not a member of the Alliance", the expert noted.

© AFP 2019 / NIKOLA BESEVIC
Kosovo War at 20: How Britain and America Backed Jihadists Throughout Conflict
He recalls that Kosovo has long organised joint military manoeuvres with the Albanian Army, also noting that the security situation in Serbia is very complicated and NATO drills in Croatia including representatives of Albania and Kosovo are clearly not messages of goodwill to Serbia.

"Obviously, we are moving towards a certain aggravation of the situation around this Western Balkan Gordian knot. I am far from being optimistic and I do not see how the problem could be resolved by diplomatic or some other means. In fact, all this will continue, this whole demonstration of power games towards Serbia, and how would it all turn out — is difficult to predict", Stojanović concluded.