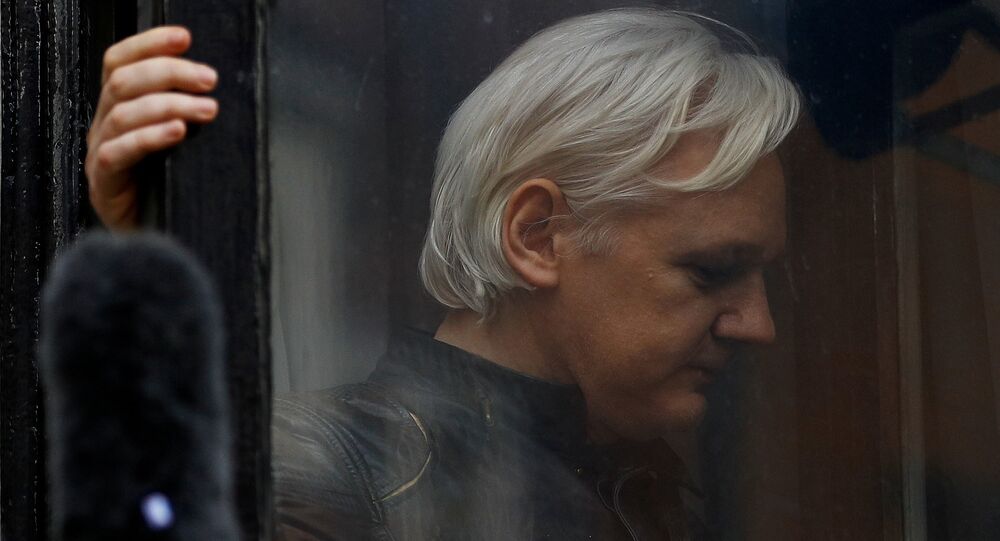 Expert: Media Did Good Job Focusing on Assange's Personality, Not on Work He Did

WikiLeaks founder Julian Assange has been sentenced to 50 weeks in prison for skipping bail. Assange was arrested by UK authorities on 11 April at the request of the US government.

Being arrested after having spent nearly seven years in Ecuadorian embassy, the WikiLeaks founder, who has become famous for leaking classified US government data, may now face extradition to the United States on charges of conspiracy to commit computer intrusion. Sputnik spoke about it with Joe Lauria, editor-in-chief of Consortium News and author of the book "How I Lost, By Hillary Clinton".

Sputnik: WikiLeaks' editor-in-chief has previously said that Assange's possible extradition to the US would set a serious precedent for journalists worldwide. Is it so?

Joe Lauria: Absolutely. This is about arresting and prosecuting a journalist for publishing and they probably are going to use the Espionage Act in the US, which does have a provision where any person who's unauthorised and has unauthorised possession of classified information can be prosecuted, and also for the disseminating that information. So the law is on the books. It's a terrible law, it should have never been there, it's never been used by any American President. Richard Nixon tried it against two NYT reporters in the Pentagon papers case but there was never an indictment — there was a grand jury. So this would be the first time any US administration used that section of the Espionage Act to prosecute a journalist for performing an act of journalism and publishing. Assange has been indicted on the charge of supposed intrusion into a government computer.

But if you read the indictment carefully, Chelsea Manning, who was the source that he was communicating with, had top secret clearance — that's the highest clearance in the US government. She had access to this material. Assange was not helping her to penetrate a database that she didn't have access to. What he was doing — he was trying to help her hide her identity by logging in under a different name, an administrative name. Chelsea Manning needed help in creating a password to get in under a different name. So what he was doing was trying to protect the identity of his source, which any journalist does, any investigative journalist does absolutely. It's a must; you must protect the source's name because of what could happen to that source. So he was performing journalism, he was not hacking and that's not going to be what he will be charged on. The fear is that he will be charged on espionage, because in fact he did have unauthorised possession of classified information and he disseminated that. Nobody can argue that. So he did technically break the espionage act.

But it's never been used because that criminalises journalism. The Trump administration is on the verge of criminalising journalism if they add extra charges in a superseding indictment to what they've already indicted — he's indicted for only a five year sentence. They don't want to keep him just 5 years. The Americans would like to put him away forever. There's also a death penalty in the Espionage Act and the death penalty can only be applied in a time of war, and of course, some of the leaks dealt with the Iraq War and the Afghanistan War. So if they really want to do that, they could even try to impose a judge who could sentence him to a death penalty. The UK is still a part of the EU — they would not be able to extradite him to a country that will extradite him, but the US can say they won't seek the death penalty. However, that would be up to the judge to decide, not the prosecutors. So it's a very dangerous moment for journalism, it is a defining moment.

© REUTERS / Hannah McKay
Assange's Tough Sentence in UK Signals Start of Campaign to Curb Press Freedom - Activists
One has to decide, whether you're a citizen, a journalist, or a politician, whether you support this man no matter what you think of him personally, whether or not you support his work as a journalist,  Because if they prosecute him and criminalise journalism — then all journalists are at risk because all newspapers, journalists around the world, publish classified information. So if that becomes criminalised, that will have an enormous effect on the future of journalism. That's why every journalist has to oppose the prosecution of Julian Assange.

READ MORE: US and UK's 'Heinous Crimes Will Be on Trial' if Assange Extradited — Journalist

Sputnik: How dangerous would the prison time for Julian Assange himself be, Given his Health After 7 years inside the embassy?

Joe Lauria: His health is very bad. His mother has tweeted that his doctors said he should go to hospital but he hasn't gone to hospital. He was not able to see his lawyers for the first three weeks in jail. So he's certainly suffered for seven years, without being outside and seeing the sun. If he goes to the US, there is every fear that he could face what Americans call ‘enhanced interrogation', which everybody else calls torture. There's even a possibility that he could be charged under terrorism laws, if they could try to create a case that he helped the Taliban somehow by publishing the Afghan war logs, for instance.

So that's not out of the realm (of possibility) that he could wind up in Guantanamo. Even his lawyer's quote today, which I've read, brought up that possibility to try to get the judge to reduce the sentence — that he could wind up in Guantanamo, which is why he went in to the embassy in London seven years ago, rather than be extradited to Sweden, where he could have then been extradited to the US. It's not an exaggeration to fear that he could be mistreated — the Americans and the Brits would certainly want to get information out of him — his sources, how he gets his information, what he has and hasn't published — they would want revenge, particularly the intelligence agencies, because they feel that they were embarrassed and they were shown to be acting above the law.

They've done a good job and the corporate media has done a good job focusing on his personality, and not on what work he did. It doesn't matter what you think about him, what kind of a guy he is — it's irrelevant. It's the work that he's done — they don't want us to focus on that work — they want to shut him up and send a message to all journalists. We're in a very dangerous moment because of that.