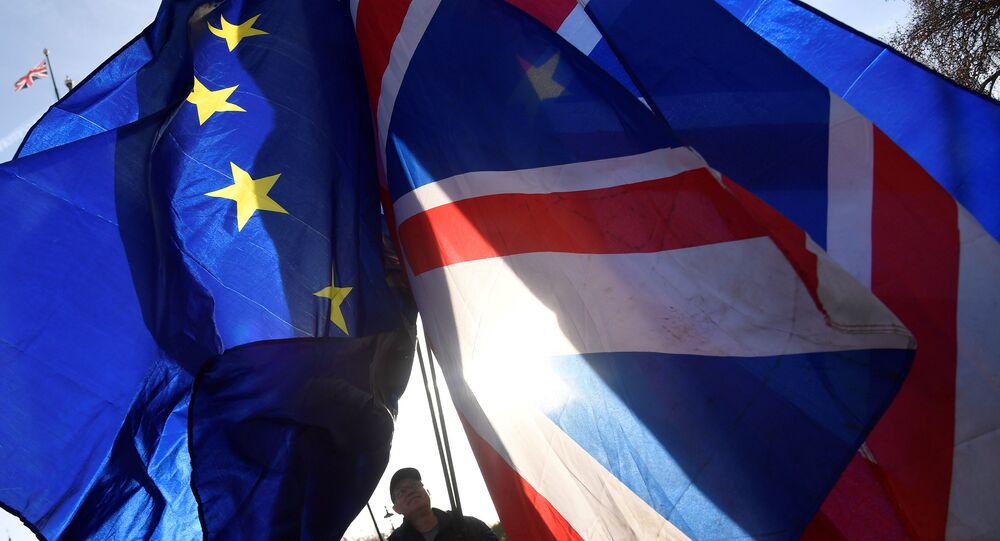 UK-EU Brexit talks are currently in a stalemate, as the UK Parliament has refused to support UK Prime Minister Theresa May's negotiated deal with the bloc. Meanwhile, British members of Parliament have began debating a series of alternatives to May’s Brexit plan.

On Monday, Alexander Mercouris, the editor-in-chief of The Duran, joined Radio Sputnik's Loud & Clear to discuss the crucial week ahead for Brexit.

​"It's important to say that yesterday, she [May] had an emergency meeting with the strong supporters of Brexit within her own party. She had a conference in which she brought all these people [including UK Foreign Secretary Boris Johnson and Brexit Secretary David Davis], and she tried to get them to back her agreement when it comes up for a vote Tuesday," Mercouris told hosts John Kiriakou and Brian Becker.

"So, unless something very unexpected happens, she is going down to another big defeat on the same proposal that she has put to the House of Commons on two previous occasions. This will be the third time that she would have brought [a deal] and the third time that it will fail."

Earlier this year, May defended a draft Brexit deal in Parliament's House of Commons. The agreement faced criticism both from the Labour opposition and the ruling Conservative Party, with several members of May's cabinet resigning over disagreements with the deal.

May is reportedly planning to roll out her revised Brexit deal for a vote in Parliament for the third time this coming week, Sputnik previously reported. However, observers say the chances of the deal passing in the Commons are bleak. The Labour Party, Scottish National Party and other pro-Remain forces led a massive protest against Brexit in London on Sunday. The rally called for a second Brexit referendum, which, Remainers claim, would stop Brexit and allow the UK to stay in the EU.

"In the meantime, in parallel to these moves, and possibly as an attempt to put pressure on the hardline Brexiters within her own party, she [May] is holding today, in Parliament, what are called indicative vote[s]. These are a series of informal votes, they have no legal weight, in which various members of Parliament are asked to propose various solutions to the Brexit crisis," Mercouris told Sputnik.

"The House of Commons votes on each of them, and that will supposedly show which of those options has the greatest support. Now, amongst those options, there is the soft Brexit option; another is a second referendum; a third is revoking Article 50, that is to say, canceling Brexit entirely. It's important to stress these indicative votes have no legal force. But, there is another proposal, being suggested by some opposition members of Parliament [MPs], but which appears to have some support from the Conservative Party, whereby if Theresa May can't negotiate Brexit with the Europeans, then a committee of the House of Commons will do so independently of her."

"That would be a huge shift in the constitution or position in Britain, which has always treated the government as the sole institution competent to negotiate with outside, foreign powers. That would create, in effect, a dual-power situation in Britain of the sort that we've never had before. We will see whether that succeeds, and we will see what kind of legal weight it has if it does," Mercouris explained.

May, who is planning to call for the third vote on her Brexit deal Tuesday, is hoping that pro-Brexit MPs and Northern Ireland's Democratic Unionist Party (DUP) will either back her deal, or pass the 'soft Brexit' compromise with the EU, Sputnik previously reported. Under the soft Brexit scenario, the UK would stay within the EU's Single Market by either becoming a member of the European Economic Area, the European Customs Union or both.

If the Parliament supports May's proposed deal, the UK will have until May 22 to prepare for an exit. However, if the vote fails, MPs will have until April 12 to either devise a new Brexit deal or to decide to leave without a deal.

However, according to Mercouris, it is "very, very, very difficult" to speculate which outcome is most likely to occur.

"The big question is whether the anti-Brexit MPs and ministers within the Conservative government are able to push back strongly enough against that idea in order to block it and what sort of proposal they would be able to come up with. I say that because the classic solution in Britain to the kind of crisis we have at the moment would be a general election and a change of government. And I think that if that were to happen, the Europeans would agree to extend the timetable by six weeks or a month that would be needed for the new government to take office," Mercouris explained.

On Wednesday, UK lawmakers rejected Amendment F on Parliament's approval for a no deal Brexit. Amendment F states that if Britain comes within seven calendar days of leaving the EU without a deal, the government must ask Parliament whether it would approve a no deal exit or if it should seek a further delay to Brexit in order to prevent this outcome and give Parliament time to determine a different way forward, Sputnik previously reported.

The next elections to the European Parliament are scheduled to take place between May 23 and May 26.

"The very last thing the [EU] wants to see is the British participating in European parliamentary elections, voting MPs to the EU parliament and then at some point leaving the EU entirely. That is a legal nightmare, and it doesn't make any kind of sense," Mercouris told Sputnik.

"So, what they want to see, is Britain leave preferably before those European elections take place or the British come forward and say, ‘Look, this thing has been so badly handled, we've got to start all over again. So, we are going to participate in the European elections on the basis that we are going to be staying the EU for at least one or two years.' Now, that of course, depends very much on the British coming forward to the Europeans before April 12, with some coherent [plan]. And at the moment, they don't have one. Looking at this from the European side, it's not obvious why they would agree to a further extension," he added.

Brexit for Dummies: What Would a No Deal Really Look Like to Average Briton?