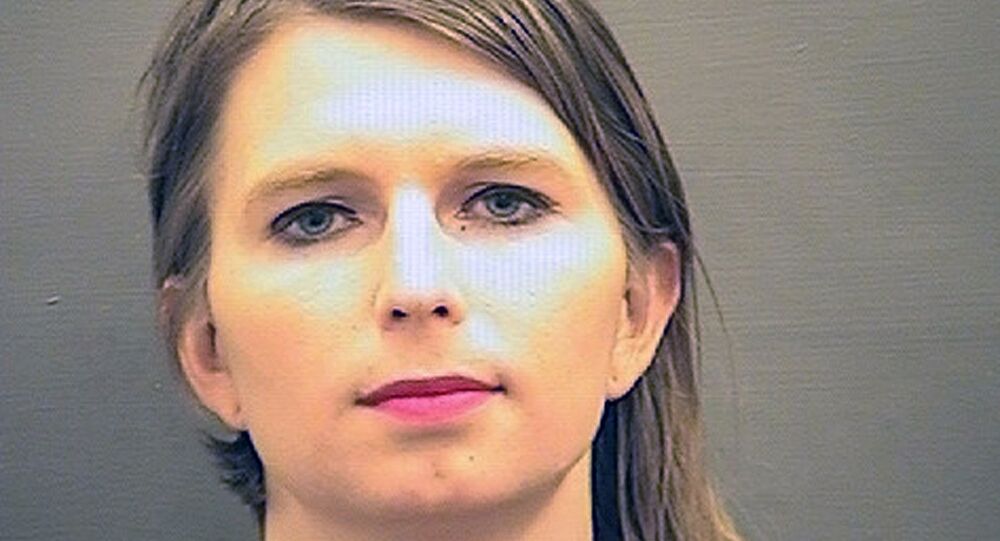 After being called before a grand jury, former US Army analyst Chelsea Manning was imprisoned once again when she refused to cooperate. Whistleblower Daniel Ellsberg told Sputnik the court hopes to pressure Manning into giving untrue testimony that will help its case against WikiLeaks founder Julian Assange.

"I will not comply with this, or any other grand jury. Imprisoning me for my refusal to answer questions only subjects me to additional punishment for my repeatedly-stated ethical objections to the grand jury system," a statement prepared by Manning prior to her trip to the Alexandria, Virginia, courthouse last Friday reads. ​"The grand jury's questions pertained to disclosures from nine years ago, and took place six years after an in-depth computer forensics case, in which I testified for almost a full day about these events. I stand by my previous public testimony."

In 2010, Manning delivered documentary proof of US war crimes in Iraq and Afghanistan to WikiLeaks, which published them under the title "Collateral Murder." Manning was discovered, tried and convicted of espionage and theft of classified documents in 2013, being given 35 years in a military prison. She was given clemency by US President Barack Obama as he left office in early 2017.

Radio Sputnik's Loud and Clear spoke about Manning's case with Ellsberg, one of the most important whistleblowers in modern American history and the author of "The Doomsday Machine: Confessions of a Nuclear War Planner."

​Ellsberg said that while "the authorities had a sincere desire to meet Chelsea's needs in jail," including medical and psychological needs, he didn't think that was possible. "Chelsea is in a postoperative state; she needs, really, a sterile environment at home… so for her to be back in jail is going to have severe stress on her and almost surely emotional problems as well, which will not be met."

© AP Photo / Patrick Semansky
Prof. on Manning’s Arrest: A Revenge Move Against Anyone Who Challenges US Establishment Interests

However, Ellsberg cautioned, "That's not true just of Chelsea; it's true of many, many people incarcerated. But it seems, especially in this case, unfair, under the circumstances, to have Chelsea back in jail for refusing to give prosecutors information that they could use to close down WikiLeaks, if possible, and start a real, effective assault on the press."

"We've seen Chelsea's internal strength and resolve tested pretty strongly over the last eight or nine years. And indeed, as a trans woman in a male military jail for so long, she was just despairing about the 35 years she was facing, a couple of times it brought her to despair — but did not bring her to the point of giving prosecutors what they would have wanted at any time, and that was information, which she swears to be false, that incriminates Julian Assange and WikiLeaks in behavior that goes beyond what journalism does every day, that they did something that can be charged under other charges than would be appropriate for the New York Times."

"The point that Chelsea has made readily… is that as far as her relations with WikiLeaks were concerned, they acted exactly as she'd hoped the New York Times would have acted, or the Washington Post, to whom she first offered her information, and they didn't pick it up, which led her to WikiLeaks. She said it was done solely on her authority, and that puts WikiLeaks, again, in the same position as the publisher of such information as the Pentagon Papers, when I gave them to the New York Times and the Post and 17 other newspapers," Ellsberg said.

In 1971, Ellsberg, then a Pentagon analyst with RAND corporation, divulged to the media the "Report of the Office of the Secretary of Defense Vietnam Task Force," a Department of Defense history of US political and military involvement in Vietnam from 1945 to 1967. The documents revealed that President Lyndon Johnson's administration had systematically lied to Congress and the American public about the aims of its war in Vietnam. Johnson said the purpose was to protect and maintain an independent South Vietnam from North Vietnamese incursion and South Vietnamese communist rebels, but the Pentagon Papers report proved that, in Defense Secretary Robert McNamara's words, the US was there "not to help a friend, but to contain China."

Ellsberg said the Trump administration's aim, like the Obama administration before it, was to "find charges that don't confront them with the challenge" of answering the question: "why isn't the New York Times in the dock?"

Ellsberg said "it's something of a puzzle" as to why Manning was called before the grand jury, when, as she maintains, the exhaustive examination of her and the records related to her case already happened at her 2013 trial.

One idea floated by Ellsberg was that "there are people in the Department of Justice who feel — who know, who've said very clearly, as has Mike Pompeo, now the secretary of state and head of CIA — Obama should not have given her clemency, that she should be in jail for a long time, for the rest of her life possibly. Some even talk about execution. I think that Trump himself has said that."

"She has the kind of spine that very few people do have; I would hope I had it in her situation. But in terms of acting on principle and being willing to go to jail, actually, rather than tell an untruth. And untruth is what these prosecutors want by putting this kind of pressure on her, coercion — jail — which, if they put her back in solitary at some point, and she was in solitary several times while she was in her seven-and-a-half year sentence," Ellsberg said, noting Manning spent 10.5 months in solitary confinement, "that was a regarded by the UN rapporteur for human rights as amounting to torture. And what do you get out of torture? False confessions."

"What they want here… is that she will, nine years later, contradict her earlier testimony in some details and impugn her testimony," which Ellsberg noted had been to the government's disadvantage, since she acted alone in giving documents to WikiLeaks. "They may want to say, ‘Well, her testimony to that effect isn't to be believed, because she's made mistakes or she's changed the testimony.'"

Or, "more favorably to them, they would like her to change her testimony," Ellsberg said, and get Manning to say Assange had put "unjournalistic pressure" on her to act the way she did.