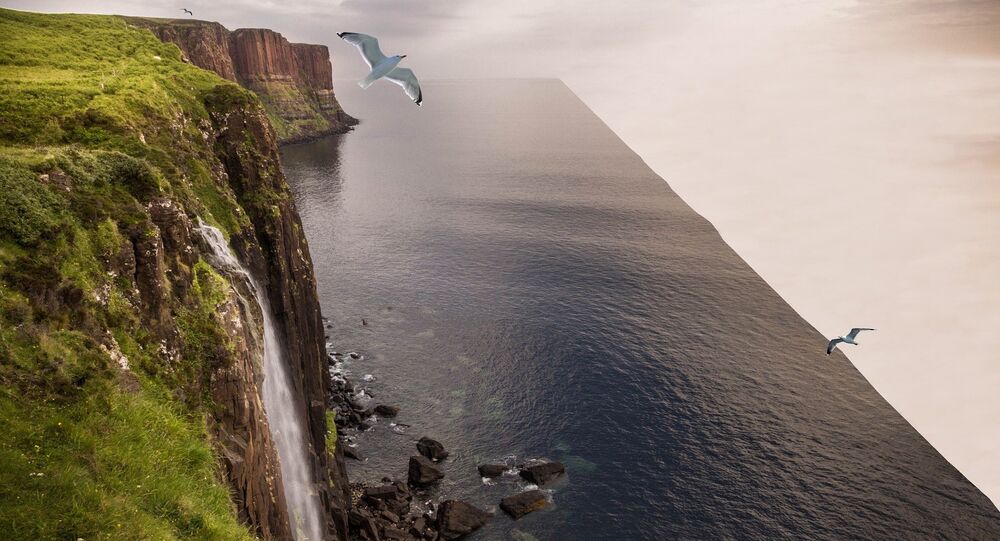 A study by Texas Tech University professor Asheley Landrum has concluded that YouTube may be partly to blame for the growing number of flat Earthers, with users falling down a "rabbit hole" of related videos to confirm their biases. Speaking to Sputnik, solar system expert Dr. Ian Whittaker explained why the odd theory just refuses to die.

Sputnik: A scientist from Texas Tech University has concluded that Flat Earth conspiracy theorists are being indoctrinated after falling down a “rabbit hole” of videos on YouTube. What impact do services like YouTube have on the spreading of conspiracy theories?

Ian Whittaker: You can certainly see the effects that the social media sites have but you've got to remember that things like the flat Earth conspiracy theories have been around for far longer than the internet's been around. It's just a case of people having more of this sort of echo chamber effect when they're on social media sites and YouTube as well, but we have to link that in with free speech as well. YouTube as a company is trying to make money, so that's why it's continually pushing more videos at people, because then more people watch, more people have the adverts and it makes more money for the company.

© Fotolia / Vadimsadovski
Great Dying or Nazi Bases? NASA Finds Massive Anomaly in Antarctica, Sparks Conspiracy Theories
Sputnik: Should we be worried about the new level of influence and momentum that conspiracy theories garner through platforms like Youtube and Facebook?

Ian Whittaker: A good question there. It's certainly spreading a lot further with these social media sites. I don't think it's anything necessarily to be worried about, as long as you sort of keep in mind, you know, using a bit of common sense generally, you can work your way through them. I mean, if you watch video on flat Earth or something like that, and you think about it and you go: 'Okay, well, I can look outside and see that's not the case' then it's very much you're working through your thinking logically and a lot of people that's what they actually do. I've read through the report and [Dr. Landrum] was surprised at the amount of people who believed in flat Earth. To me, quite a lot of that is I ask people whenever I give a talk on this sort of subject and they say, you know, a few people put their hands up say 'Oh, yes, I believe', but they're always joking and so I think this number is exaggerated slightly.

Sputnik: How should governments and large companies be acting to prevent the spread of conspiracy theories, misinformation and simply confusion?

Ian Whittaker:  What could be used is something like Wikipedia sort of pages — if something's not backed up, it says 'citation needed' or something like that. Maybe you could have some sort of judgment system on each of the videos and say: 'Okay, this has been backed up', 'this hasn't been backed up' — like a fact checker sort of thing, which would be really useful. Most of the way of fighting these conspiracy theories is actually just to have the other side represented, but the problem is the other side, in this case in terms of the flat Earth, are the scientists and we just don't have time to go out and spend as much time on YouTube creating these videos as the people who make them do; so that's the sort of the battle going on there I think. I'm not sure that the government can really or should step in and say 'you are allowed to watch this video; you're not allowed to watch this one'.

© AP Photo / NASA
NASA Offers to Prove to Skeptical NBA Star That Moon Landings Happened
I got asked a question a while back on one of these talks I did about disproving Flat Earth Theory and the question was does this actually hurt anybody? I had to think about it and in the short term no, I mean, people can believe what they want and it's fine. But it's when you start believing one thing and there's then this rolls into something else and then suddenly you stop believing a lot of science, certainly in terms of you mentioned before the anti-vaccine people —that one is exceptionally serious because you're losing your sort of herd immunity and people who see videos on that and believe it suddenly then putting the whole population at risk. In terms of flat Earth it starts off innocent, like 'ahh they're being ridiculous,' but it might steam roll into something else where, you know, we don't believe science on this point, so now we don't believe science on something else. So it's a case of trying to educate people at an early stage so they have more trust in science later on when it comes to something really important, like climate change.

Dr. Ian Whittaker is a professor from Nottingham Trent University's school of science and technology and an expert on our solar system, as well as conspiracy theories including Flat Earth and the Moon landings. The views expressed by Dr. Whittaker are his own, and do not necessarily reflect those of Sputnik.