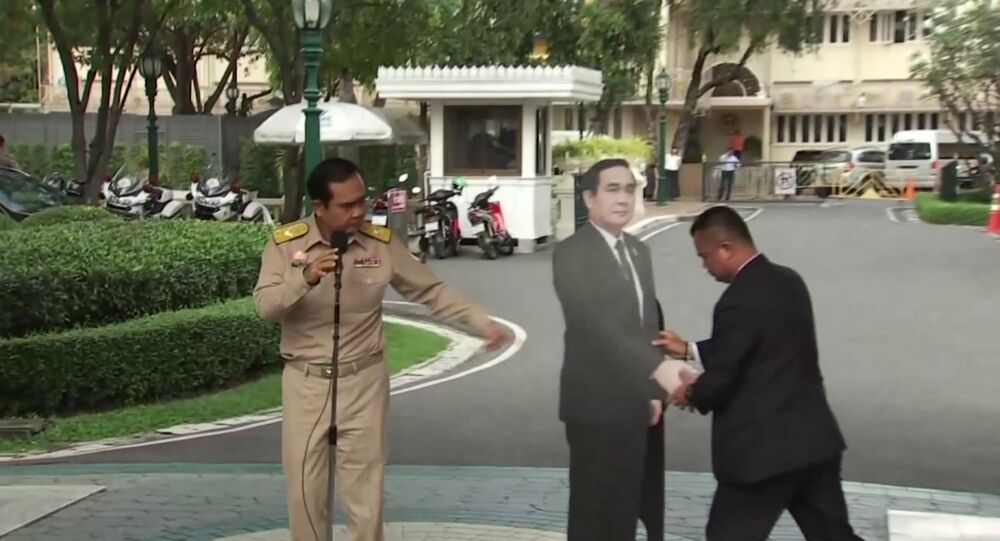 MOSCOW (Sputnik), Valentina Shvartsman - A record high number of some 9,200 people have registered for the first general elections in Thailand since the 2014 coup, set to take place in March, an official from the Election Commission of Thailand told Sputnik on Friday.

Thailand is expected to hold general elections on March 24 — for the first time since the 2014 military coup which saw former prime ministers Thaksin and Yingluck Shinawatra forced out of the country.

"As of today, we have registered 105 parties. The number [of people registered as candidates] is 9,215 people," the official said.

Friday marks the last day of a five-day registration period, but the commission has yet to finish processing applications, and the final number is likely to be higher. However, even this figure has significantly exceeded the number of contestants in the 2011 elections — the last parliamentary vote held by the country before a military coup in 2014.

Excitement Ahead of Vote

The exceptional number of parliamentary candidates shows the population's excitement for the first elections after the five-year rule of a junta, Paul Chambers, a lecturer at the Center of ASEAN Community Studies of the Naresuan University in Thailand’s Phitsanulok, told Sputnik.

"The record-high number indicates enormous interest among civilians and parties in influencing politics and public policy in the advent of a military junta," Chambers said.

The thrill around the long-awaited elections has also manifested itself in a rather creative approach of certain parties and candidates to the upcoming elections. The Thai Local Power Party released a series of campaign placards resembling Hollywood blockbuster posters, with one of them featuring Assadayut Khunviseadpong, a famous Thai drag performer known under the stage name of Natalia Pliacam.

Saranwut Saranket, a candidate from the pro-Thaksin Pheu Thai party, made a truly epic entry in the registration center — on horseback, in a traditional warrior costume and with a sword — vowing to fight against the junta. Noppajun Woratitwuttikul, representing Palang Prachatipatai Party, also dressed up for submitting his application to the electoral commission, but chose a more Western look of a Lone Ranger.

Some parliamentary candidates went even further in their attempt to gain attention and support among voters: 15 contestants have reportedly changed their legal names to those of former prime ministers, Thaksin and Yingluck.

The last day of registration process saw a truly historic event with the Thai Raksa Chart Party (Thai Save The Nation) announcing the nomination of Thai King Maha Vajiralongkorn’s elder sister, 67-year-old Princess Ubolratana, as its candidate for prime minister in the March elections.

The Thai Raksa Chart Party, an offspring of Thaksin's Puea Thai party, still maintains ties with the ousted politician, whereas Princess Ubolratana herself has been seen with the fugitive Shinawatra siblings at the FIFA World Cup in Russia.

"The Thai Raksa Chart Party is deeply honoured to have received Ubolratana Mahidol's kindness in accepting the party's nomination to be prime minister … She is concerned and wishes to take part in lifting Thais out of poverty and giving them good futures," the party said in a statement, as quoted by the Khaosod media outlet.

The sensational nomination is making the upcoming Thailand elections even more exciting to watch, as the pro-Thaksin Puea Thai and Thai Raksa Chart are expected to be the main rivals to the pro-junta Palang Pracharath Party.

Prayut Chan-o-cha, the incumbent prime minister and the head of the National Council for Peace and Order (NCPO), a military junta that has been ruling the country since 2014, has also announced his determination to run for the office as Palang Pracharath Party candidate.

The princess relinquished her official royal status to marry a Massachusetts Institute of Technology (MIT) fellow student, but she is still considered a part of the royal family and therefore protected by lese-majeste laws, under which persons convicted of defaming or insulting a royal may face up to 15 years in jail. This may also complicate the election campaign for a junta, which itself paid a great deal of attention to the enforcement of these laws over the past five years.

Chambers noted that the nomination of a royal family member was "historically unprecedented" and could help to end a junta rule.

"It is a good development to rid Thailand of a military junta but bad in the sense that it could open the door to inordinate new royal power," he said.

The expert noted that her nomination certainly increased chances of the pro-Thaksin parties in the elections.

"People will likely choose her power and Prayuth will likely not be the winning candidate," Chambers explained.

The NCPO took control over the country after a coup in May 2014, forcing out the government that was elected in 2011. Since then, an interim parliament, comprising lawmakers designated by the NCPO, has been operating in the country along with an NCPO-controlled cabinet. Political activity of any kind has been banned until the government started gradually lifting the ban in 2017 in a bid to suppress growing opposition and criticism. Last December, however, the NCPO lifted restrictions on public gatherings and political activities so that political parties could carry out election campaigns.

The much-anticipated elections may mark a return to democracy, but in a rather limited form, according to Chambers.

"Elections are supposed to return Thailand to a limited democracy. It is limited because the Senate will remain a body appointed indirectly by the junta. Also, the military will remain outside of the control of prime ministers," he said.

The expert explained that the political representation would still be lower than in the pre-coup times.

"Thailand is moving back toward elected civilian control. However, prior to the last coup, there was more electoral representation in Thailand than what will be allowed under the new system. So Thailand is moving to a form of democracy, just not to the higher level of democracy that it enjoyed previously," Chambers said.

Initially, the parliamentary elections were expected to take place no later than February 24, but was then postponed in early January due to legal issues and the Thai king's coronation, planned for May 4-6, which the authorities argued should be proper and free of political debates. The postponement sparked a wave of protests in several cities, with the most notable of them having occurred on January 20, when a group of 300 anti-junta protesters rallied outside Thammasat University in Bangkok.

In late January, the Thai King signed a decree authorizing the vote and permitting political parties to start their campaigns. Ittiporn Boonpracong, the chairman of the Election Commission of Thailand, announced that the elections will take place on March 24.