Toronto Salaheddin Islamic Centre invited a speaker who said killing Jews is the solution. Sputnik spoke about it to Noah Phillips, a syndicated columnist, editor of the Jewish Examiner.

Sputnik: Salaheddin Islamic Centre is a place with many facilities and programmes in Canada's largest city. How could speakers with anti-Semitic views be invited here? Is it normal to invite a speaker who calls for the killing of people?

Noah Phillips: Unfortunately, ignoring the anti-Semitic tendencies of high-profile people is relatively commonplace nowadays. Even at cultural or religious centres-intended to serve as places of inclusion and tolerance towards all-anti-Semitic sentiment has run rampant. At certain radical mosques, in particular, anti-Semitism and even calls to violence against Jews are increasingly mainstream and accepted. Radicals like Wael al-Ghitawi, the imam at the Al-Andalous Islamic Centre, and Sayed al-Ghitawi have called for the death of all Jews. 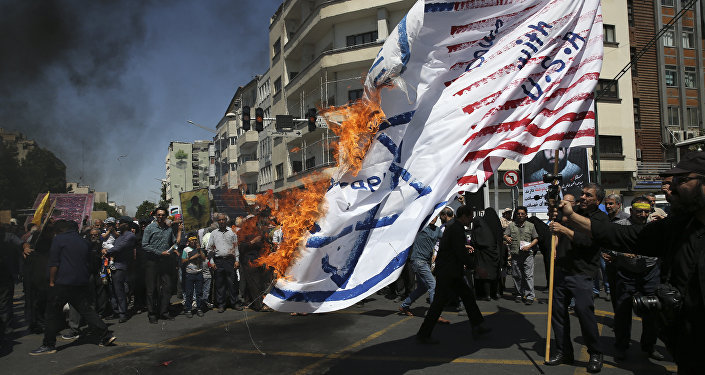 © AP Photo / Vahid Salemi
Muslim Migrants in Germany Need Anti-Semitism Classes - Council of Jews
Sputnik: Bernard Lewis and other scholars argue that the earliest verses of the Quran largely show sympathy to the Jews. But Frederick M. Schweitzer and Marvin Perry argue that references to Jews in the Quran are mostly negative. What is your take on current relations between Jews and Muslims?

Noah Phillips: In my opinion, the current state of tensions and disunity between Muslims and Jews has less to do with the Quran but due to leftist actions facilitating feeble discourse between Muslims and Jews. Leftists in most Western countries sympathize greatly with generally Muslim beliefs and causes including Palestine, migration, and others. In doing so, anti-Jew sentiment from many Muslims is shared by the larger left-leaning populace. This phenomenon has allowed for the anti-Jew sentiment of a small sect of the Muslim population to expand greatly, establishing the current tensions between Jews and Muslims.

This is not to necessarily say that Westerners should not align themselves with the Islamic world in any way, but that we should be vigilant as to whether we adopt values in alignment with our own or not.

Sputnik: According to the organisation B'nai Brith, Canada experienced a record number of anti-Semitic incidents in 2017. The vast majority of the incidents took place in the two largest provinces: Quebec and Ontario. How do you assess the level of anti-Semitism in Canada?

© CC BY-SA 3.0 / Faupel / Budapest, Festnahme von Juden
Hungarian Jews at Odds Over Museum's Alleged 'Whitewashing of Holocaust Memory'
Noah Phillips: Canada is unique in that while global anti-Semitic rates have declined, Canada's has steadily risen indicating an especial tolerance of such bigotry. This is in large part legitimized and validated by conferences such as this one, where anti-Semites are hailed and invited to spread their vile views.

Sputnik: Do you believe in the clash of civilisations theory of Samuel P. Huntington, that the Islamic world and the West are destined to confront one another?

Noah Phillips: No. In fact, what we are observing nowadays-as exemplified by this event — is the cooperation between the Islamic world and the West rather than an inherent confrontation between the two as proposed by Huntington. Radical Muslims are seeing their views accepted by Western left-wing audiences, fostering similar attitudes between the two worlds.

Facebook
'Biological Trash': German Police Alarmed Over Death Threats to Muslim, Jewish Kids
Sputnik: One of the key founders of the Salaheddin Islamic Centre, Hassan Farhat, was deemed a persona non grata by the mosque's administrators due to accusations of ties to terrorism. In addition, a number of the mosque's worshippers have been accused of ties to terrorism. Why isn't a deeper investigation into this mosque's activities being conducted?

Noah Phillips: Out of the fear of being branded as Islamophobes. And this is very unfortunate. An investigation into the comparatively small group of Muslims that are radicals and harbor bigoted views would benefit the larger Muslim populace greatly. By quashing radical views, the Muslim community who preach peace and universal respect would prosper.