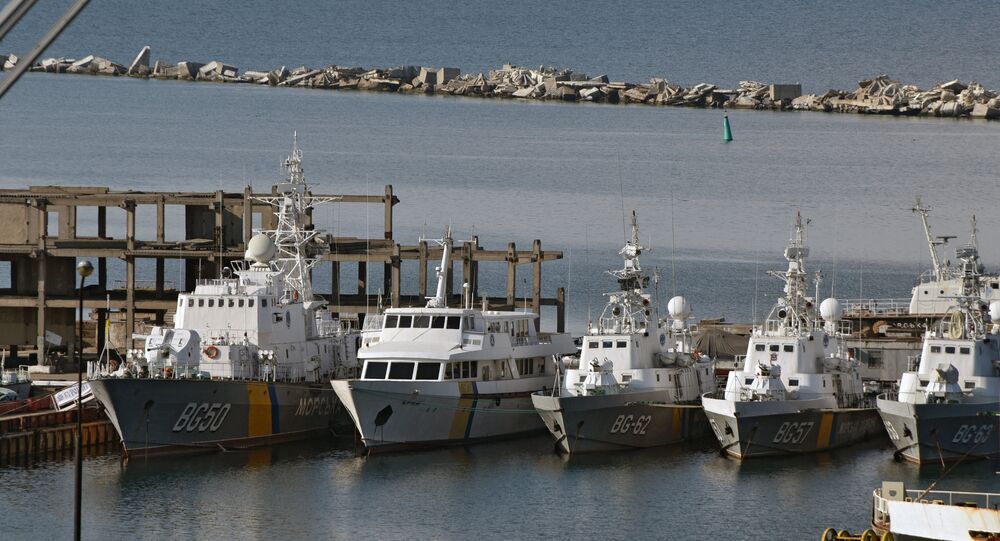 A British Royal Navy warship, the HMS Echo, arrived in the port of Ukraine's Odessa in what UK Defence Secretary Gavin Williamson described as "sending a message" to Putin. It came weeks after Kerch Strait incident when the crews of the Ukrainian ships refused to establish communication and demands to stop voiced by Russian border guards.

Sputnik has discussed the arrival of the British Royal Navy warship in the Black Sea with Professor Anatol Lieven, an international politics expert at Georgetown University in Qatar.

Sputnik: Now, Moscow has called the British ship a spy ship, while the BBC said, the ship is used to collect data from the ocean. Wikipedia writes that her majesty's ship Echo is designed to conduct survey operations in support of submarines, or amphibious operations. So, could the ship be used for spying and if so, why, in your view, is the BBC choosing to mislead its audience?

© AP Photo / Peter Byrne
UK Defence Secretary's 'Plot' to Replace Theresa May Exposed - Reports
Anatol Lieven: I don't think that BBC is trying to mislead, as far as I can see. This ship has from what I understand, various capabilities. The important thing to note, however, that it's not actually a warship. It presumably has some kind of self-defence capability, but it's not a fighting ship. So, whatever the British government may say, its presence is purely symbolic. It indicates support and sympathy for Ukraine, but no NATO forces in the region are actually capable of doing anything.

Sputnik: Professor, in your opinion, is Moscow making a mistake by continuing to hold Ukrainian ships and sailors?

Anatol Lieven: Well, I think, Moscow has made its point about how Russia controls the Sea of Azov. As far as I can see, it might as well now show generosity and a desire to reduce tensions by releasing the ships and the sailors. Again, while of course, Moscow will need to make clear that, if the Ukrainians do this again, then Moscow will do the same thing.

© AP Photo / Matt Dunham
Britain's Real Enemy, Not Russia
Something to keep in mind, of course, is that there is very strong evidence to suggest that Poroshenko in Kiev carried out this operation in order to create a crisis to justify stronger authoritarian rule within Ukraine in the run-up to the Ukrainian presidential elections, which he was well on course to losing. Of course, the Ukrainian government may well try to do this again, and again, whenever it sees domestic political advantage in doing so. Hopefully, sooner or later the West will recognise or get wise to this strategy.

Sputnik: Professor, you mentioned Petro Poroshenko. How does this situation affect his election campaign?

Anatol Lieven: Obviously, if he can introduce martial law across large areas of the country, where opposition to him is strong then the fear is that he can use this to suppress votes even rig the elections, discourage opposition candidates, all that kind of thing. I mean, it's not clear that he's done so yet, but there are certainly very well based fears that this is his intention.

© AFP 2021 / ADAM JAN
UK Reportedly Plans to Return to Cold War Strategy in Relations With Russia
The point being, there was absolutely nothing in the incident of the Kerch Strait, which has any logical relationship to a declaration of martial law across half the country.  To be honest, this is rather reminiscent and a more extreme form of what president Erdogan did Turkey, but, at least, he did face some kind of a coup. The way in which Poroshenko reacted, does make this look very like a planned provocation on the Ukrainian side for domestic political purposes, because, as I say, there is simply no logical reason for the Ukrainians to declare martial law as a result of a clash at sea.

Sputnik: Professor, what is your take on the US promise to send additional millions of dollars to help Ukraine build its navy. How significant is this aid?

Anatol Lieven: Insignificant. I mean, it's a sign, once again, of sympathy and continuing concern. Ten million dollars, it's enough to carry out minor repairs on one ship.  All this is another signal that America takes what happens seriously. It's far, far, far short of giving the Ukrainians anything serious. Fortunately, there is still sufficient opposition, I think, in Washington above all in the US uniform military to arming the Ukrainians; because, obviously, after what happened in Georgia in 2008, if this would lead to the Ukrainians into doing something much more active and this lead to another war, well the Ukrainians would lose.

America would not take part and, once again, this would be a humiliation for America and NATO. You know, as I say, fortunately, there are people in Washington, who see that and who are still, therefore, being cautious. It must be said, this long predates Trump. This is not the result of Trump's administration. This is the result of sober military calculations by the Pentagon and by sensible American diplomats.

Sputnik: Professor, in March of 2019 Ukraine will choose its next president. How high are the chances that we may see, if not reconciliation, at least a thaw in relations between Kiev and Moscow?

© AFP 2021 / CHRISTOF STACHE
UK to Open Another Military Base in Mideast – Reports
Anatol Lieven: Well, that is the huge question, of course. I mean, under Poroshenko that is clearly not possible. There is, I think if one looks at support for the opposition and its opinion polls, there is very considerable desire for this in large parts of the Ukrainian population. Of course, the opposition in Ukraine is deeply divided. It is splintered between, I mean, the moderate opposition, we're not talking here about the extreme nationalists.

The moderate opposition, which desires compromise with Russia, is very broken up and, of course, whatever influence the USA has, is also going to be used against it. As things stand today, I must say it's not at all clear to me what's going to happen.

The views expressed in this article are solely those of Anatol Lieven and do not necessarily reflect the official position of Sputnik.