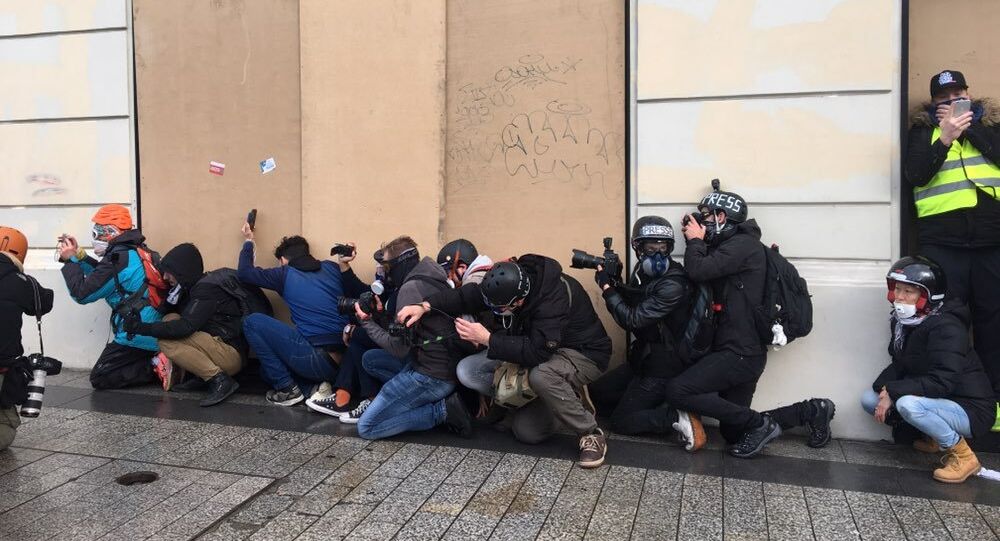 'Be It BBC or Guardian, Seems Standard Practice to Find Russian Angle' - Analyst

French intelligence services have not found any indication of Russia's alleged involvement in the dissemination of false information related to the protests currently taking place in the country.

Earlier, a BBC stringer covering the demonstrations said that the broadcaster is searching for proof of Russia’s alleged role in the “yellow vests” movement.

Sputnik: What are your thoughts on the BBC's latest attempts to find Russian trace in the French protests?

Stephen Ebert: Well I don't think it's unexpected, is it? It's depressing a bit, but it seems to be fairly common practice. I certainly know, living in the United States if nothing else, it's how should I say, easy pickings, low hanging fruit. If you want a story it's pretty easy to just say: "Hey, maybe there's a Russian angle here". I see that pretty often in the Unites States, so not like we couldn't have guessed that they would be out after that.

Sputnik: Question for you Stephen, where did you hear about this?

Stephen Ebert: To be honest, first I've heard it from your folks, it's technically not covered here; although I will say I guess where did I hear about the BBC pursuing it, I actually heard through some of you guys, I say you, I mean Russian media. But at the same time, I certainly have heard suppositions here in the United States, that here we go again, we know Russia interfered in our elections and Brexit, I think they skipped the Netherlands vote on the Ukraine, so I'll say just as rumours or accusations floating around, I've heard that since they started; that surely it's right-wing extremists, Russia is behind it etc. So, I've heard that theory ever since the start in the United States on most of our mass media that this idea that somebody should be saying that we really want to, as they say, find an angle here.

Sputnik: Why do you think there's been so little coverage of this?

Stephen Ebert: Again, there is coverage of the chaos, the riots in the United States, there absolutely is, and as I said, there is concern that this is ever increasing, popular uprisings. Have there been mass accusations tying it to Russia, it's been discussed in Western media but not hyped, as I'm used to.

Sputnik: France has actually concluded that there was no Russian trace in the protests. Why do you think that there is this BBC desire to accuse Russia of involvement?

© AFP 2020 / Remy Gabalda
'Propaganda Outlet': Scholar Calls BBC Out on Anti-Russian Bias
Stephen Ebert: Whether it's to BBC or The Guardian, to me that almost seems to be standard practice for the BBC these days to find a Russian angle, and as I said, it's in a sense, almost journalistic laziness. If you want to come up with good stories, because at the end of the day pretty much everywhere, I don't know about Russia, but pretty much everywhere news is no longer news, it's whatever can get viewers or eyeballs, or clicks; it's a better story for the BBC, as a matter of policy certainly from UK leadership, they're pretty much lockstep with the United States at this point in terms of how we see Russia, as once again the evil Empire led by the former KGB. That's pretty much a tagline we see quite frequently, so sadly it's not terribly surprising.

We also heard at some point, as I recall, you and I probably discussed, we were talking about Ukraine about how there's hundreds and thousands of Russian soldiers invading, even when it was made known by the Ukrainian military leadership that no, and even when the folks from the Organization for Security and Co-operation in Europe said no, that's not true; even though somebody said it's actually not true, I'm pretty sure that won't end the debate. I'm quite sure that over the next couple weeks, if the protests will continue, at least in the United States there will always be somebody saying that "you can probably bet Russia is behind it".