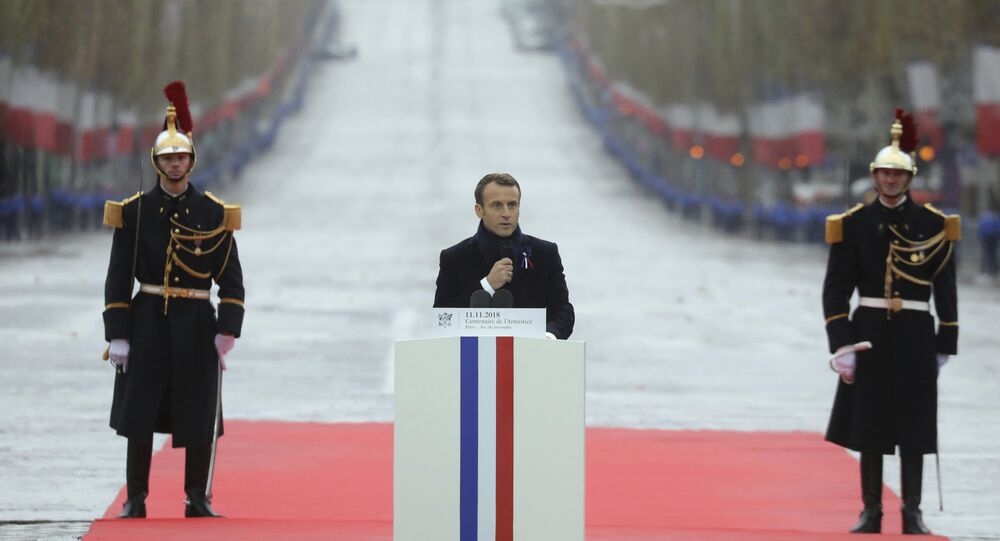 French President Emmanuel Macron has visited Berlin for a remembrance service to victims of war and dictatorships. He gave a speech in the Bundestag, the German federal parliament, and made a powerful plea to German Chancellor Angela Merkel and the rest of Europe.

Sputnik has discussed Macron's latest comments with Anne Wesemann, Head of the department at the UK Open University Law School

Sputnik: What is the ‘chaos’ that Macron speaks about?

Anne Wesemann: The chaos Macron speaks about is a multitude of issues that have been brewing for a very, very long time. He refers to that Poland interacts with the EU and struggles internally.

He refers to the way Italy is trying at the moment to get approval for budgetary ideas that aren’t really within the EU’s remit to accept. But he also refers to external factors, like the way Trump developed his international policy in the US, and other wars that are brewing on the rims of the EU.

Anne Wesemann: The factors are so diverse that it’s very difficult to put a finger on one particular issue to say ‘this is what threatens Europe the most.’

I think what Macron is really trying to do is the way he approaches his speeches: he is trying to draw Merkel and draw the German government in, and bring them closer to his view and his projection of the way the EU needs to be reformed.

So the proposals he has brought in the beginning of the year regarding the Eurozone, and regarding the international EU policy are all things that he still wants to progress, implement, and need Merkel and the German government to really push forward. He can’t do that by himself, and he knows that.

Sputnik: Could the Franco-German alliance lead the whole European bloc towards unity?

© AFP 2021 / PATRICK HERTZOG
Why Does EU Need an Army – France at Risk of Downgrading Its International Status
Anne Wesemann: Macron was very clever in the way he approached this debate: he knows just as anybody familiar with European history that the Franco-German relationship is the key for the success of the European Union. It all started with the steel and coal economic cooperation between France and Germany.

That was meant to bring peace to Europe, and it continues to be the fundamental cooperation of those two countries that will decide the fate of the European Union really.

And what he was addressing there relates to that historical context as much as he is challenging the German government to come on board with the necessary reforms. We need to keep in mind that France and Germany have very different perceptions of what the EU as a whole needs to do, but also how both countries benefit from that Union and how it reflects internally.

© AP Photo / Eric Vidal
Macron's EU Army Idea Indicates 'Emerging Crack in NATO' – Turkish MP
So while Macron focuses on a very particular understanding of economics and the Eurozone, Merkel of course is governing a country which has an economy that is focusing on export. She is much more leaning to compromise an international cooperation than Macron might necessarily be.

That’s the fundamental difference between them, just that Merkel will continue to try and de-centralise responsibilities, whereas Macron goes the complete opposite way.

The way we see France and Germany operate and interact with the EU stage is also a reflection of the way these states operate internally.

Views and opinions expressed in this article are those of Anne Wesemann and do not necessarily reflect those of Sputnik.

Commentator Says 'It's too Late' for Macron to Recapture His Popularity

Macron: Being US Ally Does Not Mean Being Vassal State