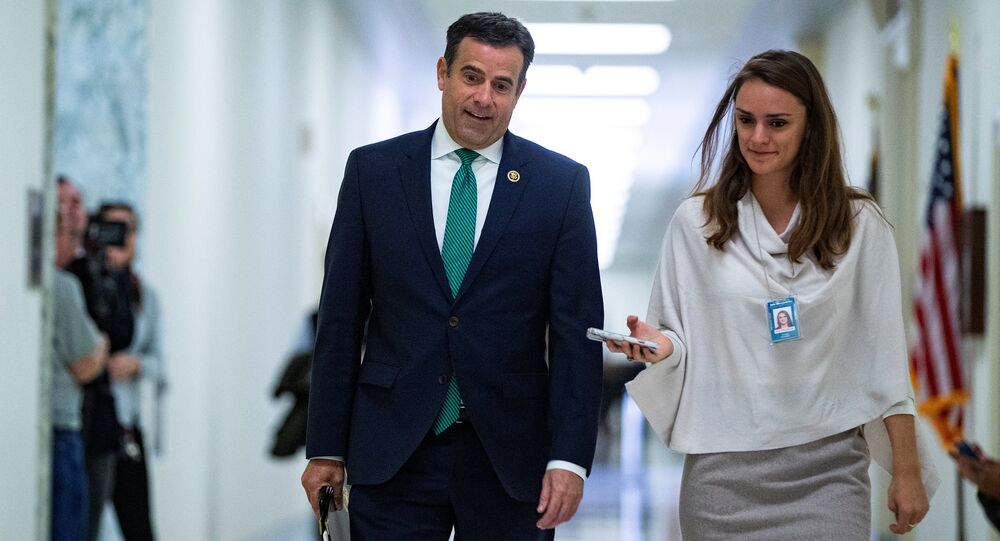 Former Donald Trump presidential campaign adviser George Papadopoulos said Thursday that the FBI had “framed” him as an alleged Russian connection to Trump’s campaign. A political journalist and author told Sputnik Friday the adviser was “the key to the whole” Russiagate operation.”

Papadopoulos, emerging from a two-week prison stay for lying to the FBI during its investigation into alleged Russian meddling in the US 2016 presidential election, told Fox News Thursday he'd been essentially set up by Western intelligence agencies.

"I believe there was tremendous misconduct on the government's behalf regarding my case," the 31-year-old former campaign adviser said. "Given certain information that I learned yesterday that I can't publicly disclose right now, I'm actually even considering withdrawing my agreement I've come to with the government."

Papadopoulos also gave seven hours of testimony to the House Judiciary and Oversight Committees Thursday, but declined to testify before the Senate Intelligence Committee unless promised immunity, CNN reported. That's because, while the House committees are looking into the FBI and Justice Department's handling of investigations into Hillary Clinton and Russia, the Senate committee is concerned with "Russiagate" proper: the question of whether or not Russians meddled in the 2016 election or colluded with American actors to sway the outcome in a certain direction.

Papadopoulos told Fox News that the idea he could have been the point of contact between the Russian government and Trump's campaign was absurd.

"All my contacts were in completely in the Middle East, in Israel in particular, and Europe. I had absolutely no contacts in Russia," Papadopoulos explained. "How on Earth could a man like me be at the center of a Russian conspiracy unless I was completely framed by Western intelligence?"

Radio Sputnik's Loud and Clear spoke with Daniel Lazare, a journalist and author of three books — "The Frozen Republic," "The Velvet Coup" and "America's Undeclared War" — about Papadopoulos' claims and his role in the narrative constructed by US intelligence about the 2016 election campaign.

​Lazare said he thought Papadopoulos' threat of withdrawal was "a bit far-fetched," but that the former adviser was "a very important guy. He is the one whose words, apparently, were the start of the [Russiagate] investigation… The sequence of events that led to his conversation with the Australian ambassador that triggered the FBI inquiry is very important because it gets… to the heart of how the investigation got started, what it's about, what really triggered it and whether everything is really on the up-and-up, when we talk about the origin of this whole crusade."

"Papadopoulos is the key to this whole operation," Lazare told hosts John Kiriakou and Brian Becker. "We don't really know how this thing got started. All we know is, beginning in mid-2016, the wires were crackling with reports from Eastern Europe, the Baltics, et cetera, about Russian penetration. Papadopoulos says that he was approached, in a period of weeks, by a half-dozen or more mysterious guys — Stephen Halper, Joseph Mifsud, [Alexander] Downer, et cetera, et cetera — all sort of trying to probe him about the Russia connection, and he doesn't really know what it was all about, but apparently these forces were converging."

"And then, of course, there was the famous report by the British ex-MI6 agent, Christopher Steele, alleging a Russia connection. So all these forces were converging some time in mid-2016, all preaching the same line: that there was an all-out Russian effort to penetrate the [election] campaign and to swing it to Trump. So, we don't know where this came from, but all we know is that a major investigation was launched, and one which dominated the headlines for two years and really in a very serious way destabilized the Trump administration and Washington politics in general. It's all very mysterious; it looks like some kind of intelligence operation."

Lazare noted that the FBI allegedly violated Papadopoulos' constitutional rights by failing "to inform the FISA [Foreign Intelligence Surveillance Act] court about exculpatory evidence, that apparently Papadopoulos told them that he had never made any contact, never made any outreach to Russians, that he had done nothing in order to facilitate any kind of Russian contact whatsoever, and that the FBI failed to pass this along to the FISA court. That's exculpatory evidence that the FISA court should've known about, should've been told about, but the FBI didn't [tell them]."

"Mifsud is especially important, because the press has tried to portray him as some kind of Russian agent, but clearly he had very strong ties to Western intelligence — British, Italian and US intelligence — so he's one of a number of people with ties to US intelligence who are approaching Papadopoulos, probing him and trying to somehow lure him into saying something about a Russian connection. And so, all these figures: Michael Dearlove, Christopher Steele, they all had connections with British or US intelligence. So it seems that all these connected people were trying to push this line at this point of time."