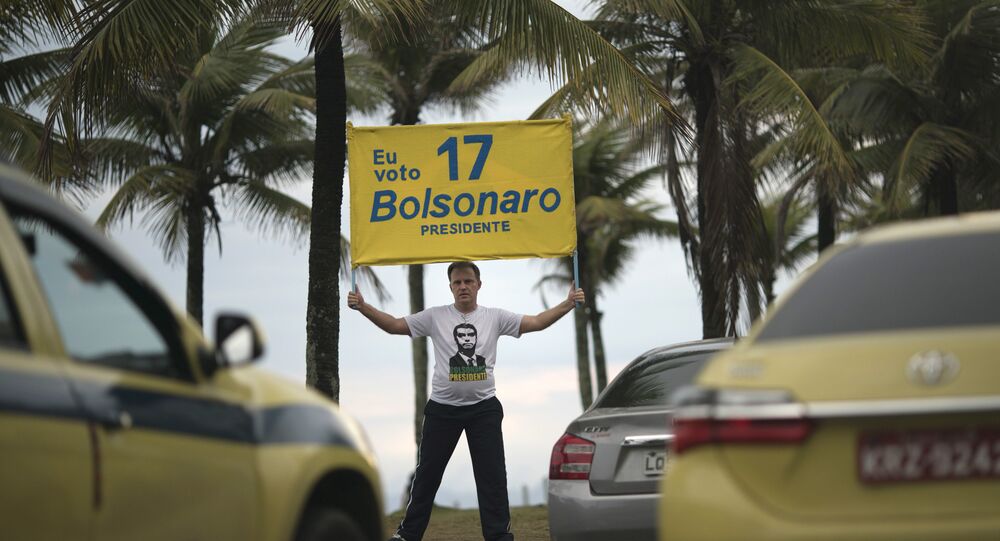 Brazil's right-wing presidential candidate Jair Bolsonaro is leading in the polls ahead of Sunday’s run-off vote. According to the latest survey by Ibope published on Tuesday, Mr. Bolsonaro is expected to win 57% of the vote.

Sputnik has discussed this with Monica Arruda de Almeida, Adjunct Professor at the Center for Latin American Studies at Edmund A. Walsh School of Foreign Service at Georgetown University.

Sputnik: Bolsonaro is leading in the polls and surveys with people of color and LGBT community also throwing their support behind the candidate. What do you make of this unlikely backing?

Monica Arruda de Almeida: I think to me it's clear that it's very hard to make a case that Bolsonaro is a racist. I've watched almost 20 hours of videos by him throughout the years, not just recently, and there's nothing about him to suggest that he's a racist. This is just spin and it's very unfortunate to me, as a former journalist; that I don't think the media, especially the foreign media, is doing its job and trying to understand why you have 50 million people voting for this guy and why do they just keep reproducing labels against him.

I'm not even a Bolsonaro supporter, but I wrote a piece recently about this because I think it's really unfair and it's not good journalism to be doing that; and people in Brazil, who are in Brazil and know him better, know that there's nothing about him that suggests that he's a racist.

© REUTERS / Sergio Moraes
Brazil’s Right-Wing Candidate Leads Presidential Race - Poll
He has in the past made statements contrary to demarcation of land for people of African descent, the descendants of slaves, and that has been used against him and people don't think twice before calling him a racist before checking it out. When that happened you have a lot of his friends from the military times, dark-skinned, black friends who came to his defense. One of his black friends actually changed his last name to Bolsonaro just to support him, to make a statement about this issue. Bolsonaro's father-in-law is black. Really this label has been used to attack him and people just buy those things.

As for the LGBT community that's a more gray zone because Bolsonaro clearly is a very conservative guy. He does hold views that one will not say that are pro-gay rights. He once said something that's just horrible, that he would rather see one of his sons dead rather than being gay, which is a horrible thing to say; but he in his actions, and even dealing with other congress members who are openly gay he has been a good partner in terms of trying to create legislation.

© REUTERS / Paulo Whitaker
Brazil's Candidate Bolsonaro Plans to 'Put Armed Forces in the Streets' to Fight Violence
So he has this mix, on one hand, he says things that are very insensitive, on the other hand, his actions prove those who accuse him of being homophobic wrong. But he's clearly a conservative guy and many in the gay community don't trust him, not because necessarily that he would have policies against them, but because what he says has an impact among some of his followers who tend to be very aggressive against the gay community and that's a real concern.

My hope is that if he's elected that he'll learn to tone down his speech, be conciliatory and make sure that minorities are protected and condemn in very clear words that violence against any group is disallowed.

Sputnik: What do you make of his statements in which he openly supports the military dictatorship that ruled Brazil from 1964 to 1985?

Monica Arruda de Almeida: You can interpret that in many ways. For example, something that I think is even embarrassing for me to admit, but until I was 16-17 years old I didn't even know that we were living in a dictatorship. I'm originally from Brazil and in my family what I saw my father doing extremely well during the years of dictatorship, and then later I learned that we were in a dictatorship because we would vote for governor there was transition in power at the president level, they were all generals.

© AP Photo / Leo Correa
Brazilian Workers’ Party Asks Court to Remove Bolsonaro From Presidential Race
But you did see a transition in power and those years are associated with economic boom, with the phase of the so-called economic miracle in Brazil where we had almost 10% growth a year. And Brazil was a relatively safe place. Rio de Janeiro, my hometown, was never really safe, but I as a kid I could go anywhere. I was completely a free-range kid. I would just disappear during the day, this is during the weekend of course, and I would come back at night and my parents were not concerned and many of my childhood friends we would all do that. So it was a very safe place, so for many people they associate the years of dictatorship with years of economic boom and security.

The views expressed in this article are solely those of Monica Arruda de Almeida and do not necessarily reflect the official position of Sputnik.