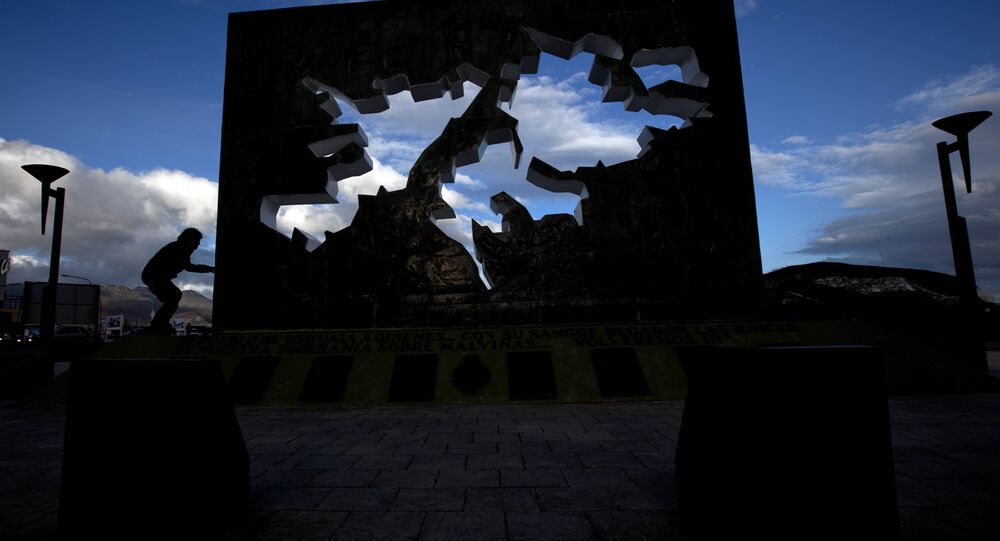 From October 15 to 29, UK is conducting military exercises on the Falkland Islands. The British media said that the Argentine military is going to invade the islands. According to Elsa Bruzzone, secretary for Centro de Militares para la Democracia de Argentina, although the British exercises are scheduled, they raise certain concerns in Argentina.

Bruzzone told Sputnik that the country is following the news “with great concern, because in Britain the Malvinas [Falkland Islands] is always an excuse to address some internal issues of the country and try to forget the problems arising with their divorce from the EU.”

According to Bruzzone, they “want to convince the British that Argentina plans to take the islands militarily, meaning that they are planning a new war in the South Atlantic and therefore they need to increase defense spending,” including the current British military exercises.

© AP Photo / Natacha Pisarenko
Falklands Legislator Praises UK War Games Citing 'Threat From Argentina'
At the same time, the expert pointed out that Britain is aware of Argentina’s activities in the region.

“With all the equipment they have in the area, they know perfectly well what we are doing (…) They have full control over our actions.”

The expert admitted that the Falklands is a sensitive subject for Argentinians; however the country intends to solve this problem without the use of force.

“For us, the Malvinas is an open wound, it is in our hearts, souls and minds. It is part of our country, we know that one day we will regain the islands, of course not through a war.”

Retired Colonel Omar Locatelli agreed with Bruzzone and noted that President Mauricio Macri’s government “has the idea of ​​solving this issue by evolving diplomatically and economically towards the achievement of shared sovereignty.”

© AP Photo / Natacha Pisarenko
Argentina Slams British Military Exercises, Missile Launches in Falklands
In the first week of October, the British tabloid The Express published a series of articles alleging that the Argentine military is carrying out military exercises that simulate a massive landing on the Malvinas Islands. According to General Julian Thompson, a British veteran of the 1982 conflict, the landing could take place if the Labour Party comes to power.

In another article, Mark Pollard, a member of the Malvinas Assembly, shared his fear of “a constant threat coming from Argentina.”

Both articles point to the exercises being carried out in August under the name of “Operation Maipú.” However, both experts told Sputnik that “Operation Maipú was held as a celebration of the 200th anniversary of the Battle of Maipú that affirmed the independence of Chile.”