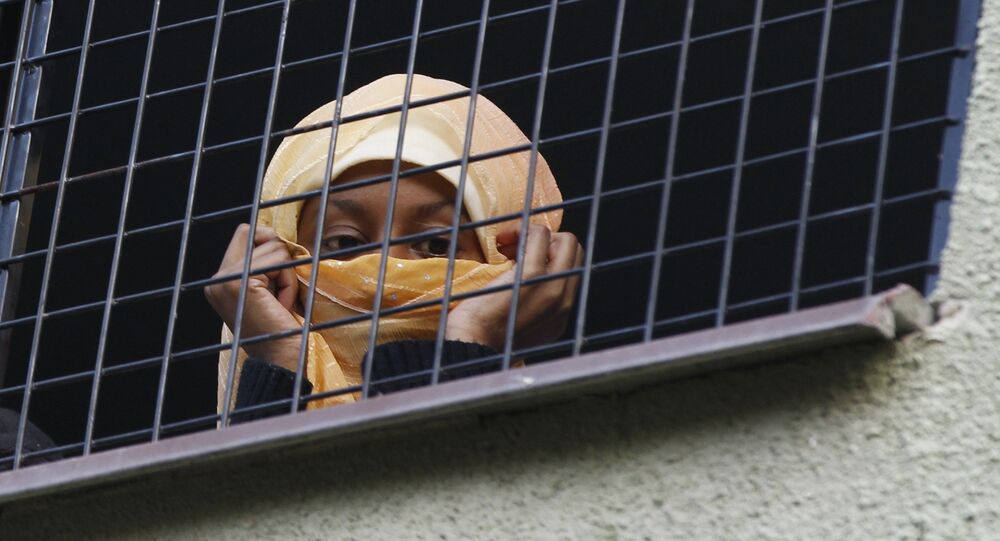 The Czech city of Teplice is a resort town mainly visited by Arab tourists. Muslims, in a manner of speaking, have integrated themselves into city life. There are even two Arab candidates running in local elections in Teplice.

This fact has been noted by Iva Procházková, a civic activist, whose Facebook page was subsequently blocked over her comments. Sputnik has discussed the overall situation in Teplice with her.

Sputnik: Has the number of Muslim tourists in Teplice increased over the past few years?

© AP Photo / Luca Bruno
Germany Rejects Report About Flying Migrants to Italy as Salvini Vows to Close Airports
Iva Procházková: I believe the number of Muslim tourists has decreased; however, there are lots of Muslims in town. For example, there are no Muslims in the district of Řetenice, but there are lots of them in Šanov, Prosetice and in the city center during the tourist season. Šanov's  Muslims have had a big impact on the district's living standards. Moreover, the fact that they are also occupying the city's parks, such as the park by the theater or the Palace Gardens, means that they're spreading to the city center.

Iva Procházková: I think that only an uninformed person could mistake a migrant for a Muslim tourist, even though I have occasionally seen that. On the other hand, it also affects us, even indirectly. What Teplice residents should be concerned about are the Muslim settlements in the city, as well as the proximity of the unprotected borders with Germany.

READ MORE: UK a 'Small Country & It Has Had Enough': New Anti-Migrant Incident in London

© REUTERS / Stefano Rellandini
Italy's Flight From Eurozone Would Be Liberation, Not Punishment – Eurexit Chief
According to the German Secret Service, around 2,000 Muslims are on the wanted list within their territory. I think the idea that one of them may opt to hide in the Teplice Muslim community is not so unimaginable. There are some quite disturbing reports of what is happening and what's been proclaimed in Czech mosques. However, I don't think that the migratory wave has altered the people's treatment of our guests from the Arab world.

Sputnik: Do Arab tourists have an interest in permanent residence in the Czech Republic?

Iva Procházková: I consider this to be the most burning problem for today's Teplice. Not only have Muslims bought hundreds of empty lots, but they also own dozens of houses in the city center, for example, in Teplice's Prosetice district, Arabic names on doorbells are now a common thing. We also see an increased number of Muslims in the city during off season, when there are no spa guests.

© AFP 2021 / LOUISA GOULIAMAKI
Greek Authorities Clamping Down on Daesh Recruiters in Migrant Camp
I see Muslims daily on public transport, in shops, at the hospital or in the streets. Veiled Muslim girls are now a common sight at Teplice's schools; school canteens even have special lunches for them. They are slowly and surely becoming part of the city, and the locals, without realizing it, are becoming accustomed to it. The fact that we are in imminent danger of (becoming) an unregulated society and (having) no-go areas, as we see in many Western European cities, is obvious.

I don't understand why Teplice residents would nominate them in the municipal elections. This is a mockery of all the people who are either struggling to get along with them or trying to do something about it. But to be fair, there's a decades' difference between Muslim residents and tourists — in their nationality, social status and integration. However, there is no difference in their ideology of Islam, which I consider determinant.

Sputnik: Do you think that Khalouf Abdul Rahman and Ziad Hindawi (Khalouf is a Syrian, but not a Muslim) won't be able to defend the interests of most of Teplice's citizens just because they are Muslims or Arabs?

Iva Procházková: Yes, I'm sure of that, and it's not about their origin or proficiency.  I do not know them well enough to judge their competencies. As you know, Islam is not just a religion — religion is only a small part of it. It is a complex ideology, such as communism (I'm speaking about the form now, not the content). Islam has its own legal system and a set of ethical standards, that's why I'm not sure that these gentlemen will be able defend the interests of the city.

Governing the city would certainly be a great contribution to Islam. I believe they are certainly good Muslims, which disqualifies them from having the power to decide on the residents of a non-Muslim country.

The views expressed in this article are solely those of Iva Procházková and do not necessarily reflect the official position of Sputnik.