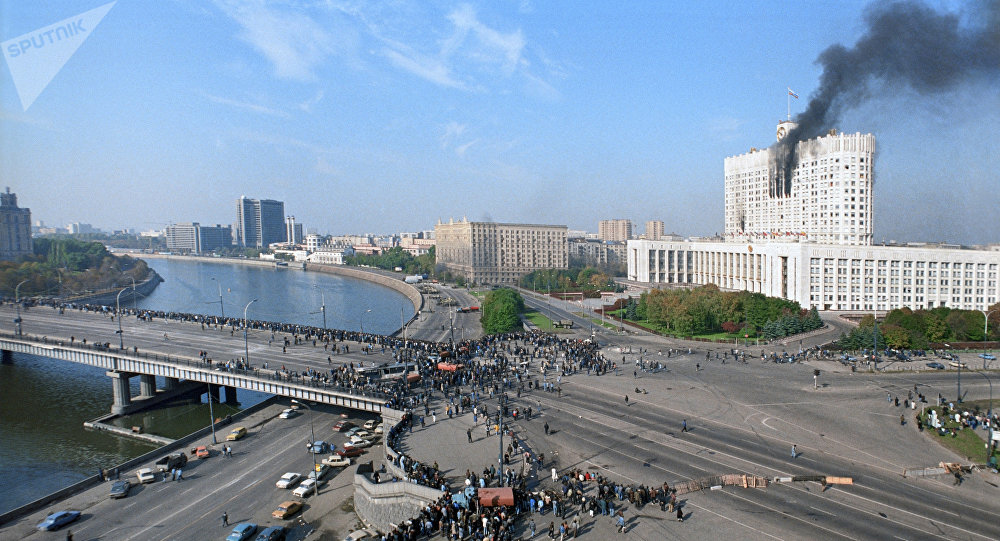 'We Ended Up Under Fire of a Sniper': Photographer Recalls Russia's 1993 Crisis

The ten-day-long standoff in October 1993 between Russian President Boris Yeltsin and the Russian parliament became the deadliest single event of street fighting in Moscow's history since the Russian Revolution. Swiss photographer Didier Ruef has recalled coming under fire in Moscow, where "danger was felt in the air."

Sputnik: Were you in Moscow during the events described that led to the White House assault? Could you share some of the details with us?

Didier Ruef: Actually, I was not in Moscow, I came to Moscow just at the end of the events, because I was in Krasnodar doing a photo reportage and on our way back we stopped in Moscow at a friend of mine’s who was a journalist; so I was there, but I don’t remember the exact dates, because it was many years ago.

Sputnik: So you were in Moscow quite accidentally and found yourself in the midst of it?

Didier Ruef: Exactly, I was there accidentally. I heard about all the events when I was in Krasnodar and when we stopped, we decided to stay in Moscow for a few days. A friend of mine, a photographer who was based in Moscow, we decided to go and look. The events were already finished actually. But the day we were walking around, we felt some kind of danger in the air – there were some shootings and we decided to move fast away from the area, but we ended up under the fire of a sniper, which meant that we had to hide behind a small wall. I was the first to say that we couldn’t stay, because we were in serious danger as that guy was shooting directly at us. So, I ran from the wall to a car that was parked like 25 meters away and hid behind it. The sniper shot at the car and then I just ran away to the hotel.

Sputnik: That certainly sounds terrifying. You said that you actually sensed danger in the air, am I correct?

Didier Ruef: Yes, we were walking and at some point all the birds stopped singing and I felt that there was some danger around. At the same time, we heard the shooting; we ran and we were very lucky to find an angle behind a wall. And when I said he was really shooting [at us], I mean, I could feel on the angle that was maybe 40cm away, [that] the wall [was] bombed, a small part of the wall was going in the air. I found a piece of stone in my shoes later on, so we were really the targets.

Sputnik: That is horrific. What was the atmosphere in Moscow at the time? Because you said that the basic events had by then sort of wrapped up, but there was, obviously, this mood that you could sense.

Didier Ruef: The atmosphere here was like always when you’re in a crisis. You have the part of the town that we came from, where people were enjoying themselves, having food or enjoying a drink or coffee, but then suddenly you walk and you’re at the wrong place at exactly the wrong time. If you are lucky – we were – you could avoid all the problems; and if you’re not, you really have to hide and find an exit. So, it was a mixture [of feelings], but it’s always like this in a war zone; at one point there’s a maximum crisis and at another, people are going on with their daily lives. 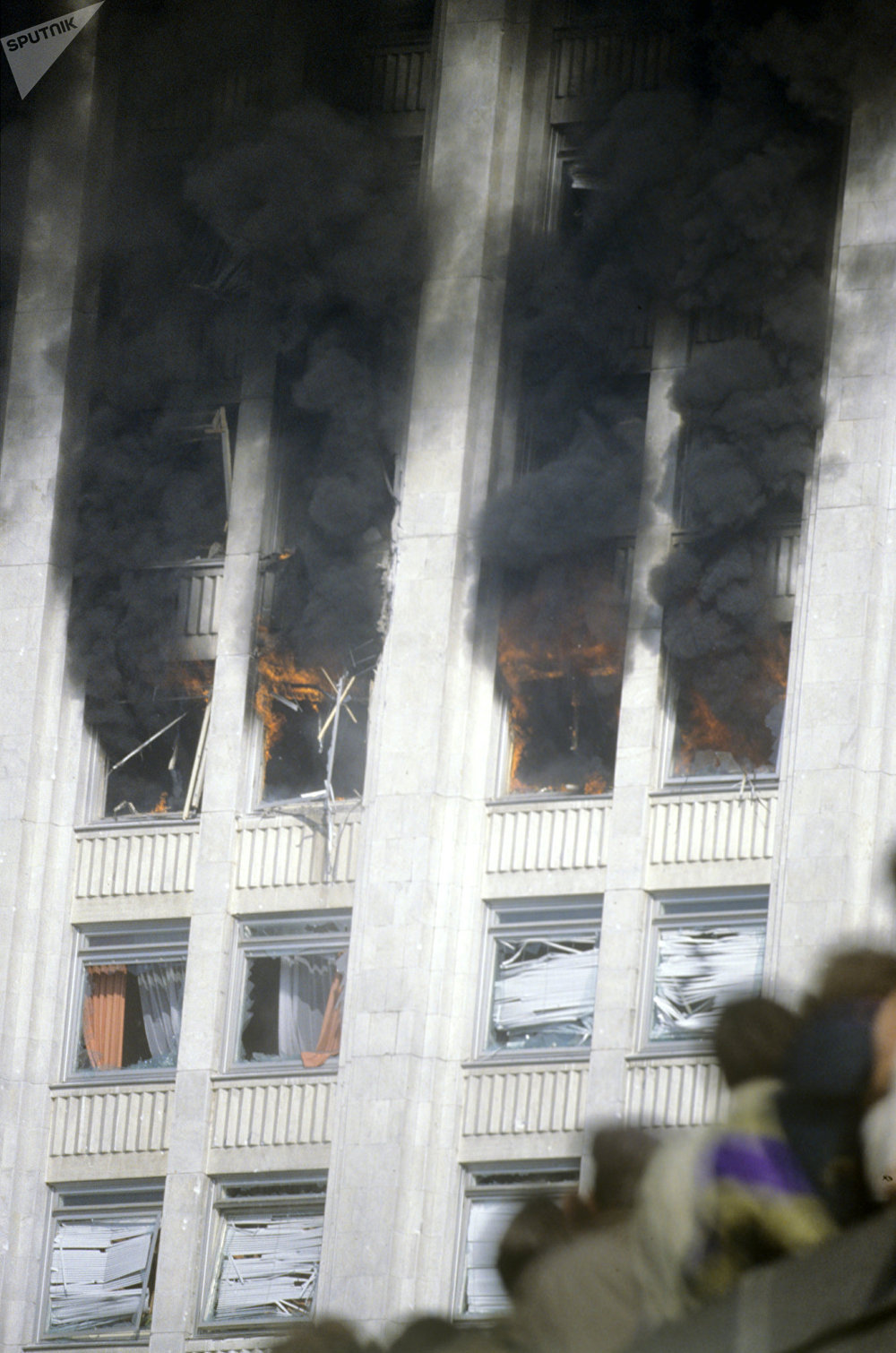 Sputnik: Exactly. You’re a photographer. I suppose you know what it’s like to paint a picture even with words, perhaps, that would be very vivid. Could you use some more brushstrokes to paint a picture of the way Moscow looked at the time and the mood of the people?

Didier Ruef: To be honest, the events took place around 11:30; we were in the street from 9 in the morning. I was in Moscow ten days before, on my way to Krasnodar, and to me the town looked like nothing had happened, because everything that happened was close to the White House. If you weren’t aware that something happened, you wouldn’t even notice it. By getting closer to the area, we started to notice that there were a lot of police and military and that the situation was tense; but if you didn’t know, you couldn’t even notice it.

Sputnik: Did you take photographs?

Didier Ruef: To be honest, there’re very few photographs. I really ran for my life. I wasn’t the only one – my friend Regino, the journalist, had to run. We all ran; we saved our lives. After, we went from the hotel and moved maybe a kilometer away, we sat and had a coffee and said that our hearts were still beating very loudly.

Sputnik: Did you leave practically the next day or did you have some more days to spend in Moscow?

Didier Ruef: To be honest, I don’t know if I left the same day or the day after. All I remember is that we didn’t know if the airport was open so that we could fly; but everything was normal for us at the end.

Sputnik: Were you at all aware of the whole political undertone of what was happening?

Didier Ruef: As I said, I was in Krasnodar and at the time, there weren’t all these Internet connections. We had a wealthy Russian businessman telling us more or less what was happening, our translator was helping us, but we weren’t that aware. We didn’t see many images on television. I wasn’t that aware that it was so big; I knew that there was some kind of political turmoil, that something was happening, it could go one direction or the other. We were lacking information, to be honest.

Sputnik: Did you have a chance to speak to any other foreign journalists here at the time?

Didier Ruef: Actually, I had, because where I was staying, a friend of mine who is also a journalist told us about the events. [That was] the reason why we decided to have a look, because we arrived that day and the next morning the fire happened. She was telling us more of what happened. I had more information when I was in Moscow than when I was in Krasnodar.

Sputnik: What about the local people? Did you get any impression of the reaction of Muscovites to what was happening?

Didier Ruef: In Krasnodar the people were very much scared that it could go the wrong way, because it was the opening of this new liberal economy and the businessman that was our guide, he didn’t want the system to go back, he wanted the opening.  Of course, they were scared that the “bad guys” would win.

Sputnik: What about people here in Moscow?

Didier Ruef: I didn’t have too many contacts with local people in Moscow. I had contacts with journalists and foreign press. They told me more or less the same story, everybody was hoping that Yeltsin would make it, because there was a sense that history was going on.

The views and opinions expressed in this article by Didier Ruef are solely those of the speaker and do not necessarily reflect Sputnik's position.