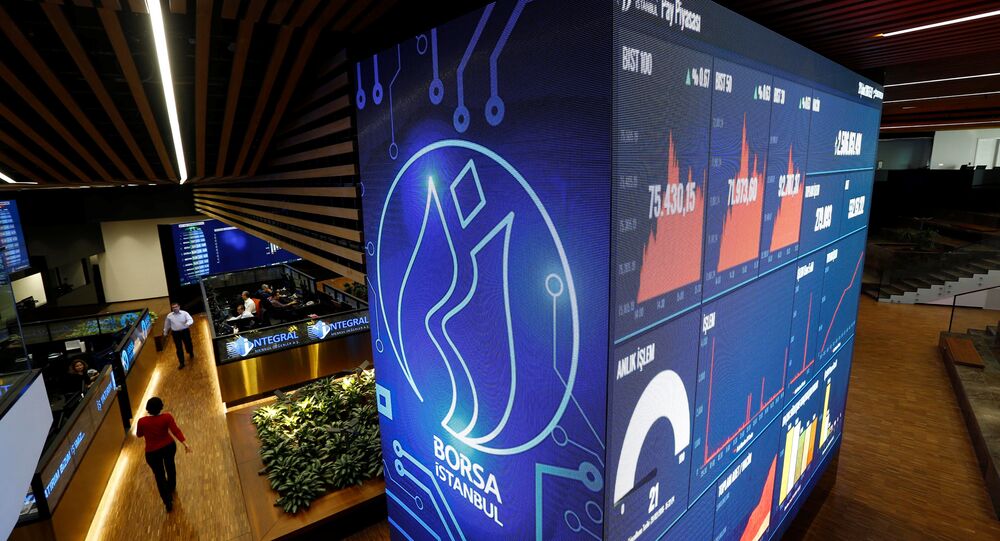 The Turkish lira has dipped nearly nine percent amid the increased US economic pressure on Ankara. Turkey's finance minister said on Sunday that Ankara is preparing an action plan in response to the crisis.

Sputnik has discussed the developments with Salih Dogan, a researcher in politics and international relations at Keele University.

Sputnik: What is your take on President Erdogan’s call to support the national currency amid the crisis? What could Turkey undertake to the avoid weakening of its currency?

Salih Dogan: I don’t think it is going to be successful to exchange dollars and gold in the US to Turkish lira by the Turkish people at the moment because the problem goes beyond this actually.

Because whenever President Erdogan talks or calls for support from his citizens in Turkey, the Turkish lira keeps getting weaker against the US dollar; and this happened today, it fell almost to (0:33) Turkish lira and the US dollar gained 20 more kurus the against Turkish lira.

© REUTERS / Murad Sezer/Illustration
Turkish Lira Rallies Against Dollar as Erdogan Vows to Ditch US Gadgets
Actually, the Turkish lira doesn’t only lose value against the US dollar but also against almost all of the currencies including the euro, sterling, or even the Georgian lari or Pakistani rupee.

Last Friday there was a meeting with the Finance Minister, the son-in-law of President Recep Tayyip Erdogan, and all the businessmen and businesswomen who were present at the meeting praised him about his policy and his big plan.

But they still keep their money in US dollars and people still say “we’re supporting Erdogan’s calls” but it’s going to be less effective than we see with the exchange between the dollar and the Turkish lira. People in Turkey are criticizing both the content and the style of the president’s presentation that Erdogan made last Friday; and it ended with a 10% loss for Turkish lira in just one day.

It’s a big problem. This financial crisis is one of the biggest ones in the last two decades, which is since 2001; and the Turkish economy has been going down at least for the last 6-7 years. There are bigger things to make in order to make the Turkish lira gain some value against the US dollar or other currencies. I don’t think that Erdogan’s policies are helping the Turkish lira.

© REUTERS / Andrea Comas
Turkish Lira Turmoil Could Impact EU Markets - Financial Expert
Sputnik: What steps could Turkey possibly take to protect its local currency? Do you think that this whole sort of financial or economic war by Donald Trump is just an attempt to make a deal? Maybe Turkey needs to make a deal with Trump?

Salih Dogan: Actually, it’s not the only problem. Maybe the current crisis between Turkey and the United States affected the drop of the Turkish lira, but it’s not the reason because it seems to be the pastor Andrew Brunson issue in Turkey. I don’t think it’s the main reason for the building tensions between the US and Turkey.

If Turkey and Trump agree on a mutual decision in the near future, the Turkish lira will keep getting worse because of the Turkish economy, actually. The problem here is not the bad relations with the United States, but it’s the bad administration of Turkey at the moment.

And as the Turkish economy is only depending on construction for the last two years, nothing else has been done by the administration. Erdogan and his party have been ruling the country for the last 16 years.

© CC0
Turkey's Solution to Lira Crisis Will Be to Dedollarize Its Economy – Economist
There were lots of economic experts making comments about this process that the Turkish economy is getting worse and worse and the Turkish lira is losing value against all the currencies in the world. So something should be done, but they just didn’t listen to the experts.

Sputnik: What is the underlying cause of the financial and the currency crisis in Turkey? What is really behind it?

Salih Dogan: I guess that one of the reasons is the election. People were not ready for an early election, at least they were expecting a change in the administration, maybe not on the presidential level but at least they were expecting change in the governmental level. It didn’t happen, so they lost their confidence, they lost their trust in Turkey and Turkish economy.

As I said, the Turkish lira has been losing value against the US dollar in the last year and it’s almost doubled; the USD exchange was like 2.5 Turkish liras last year.

So it’s almost doubled now and people lost their trust; and even though Erdogan calls for people to support the national currency it doesn’t work and people keep buying US dollars or other currencies. And that is the underlying cause of the financial crisis.

Views and opinions expressed in this article are those of Salih Dogan and do not necessarily reflect those of Sputnik.