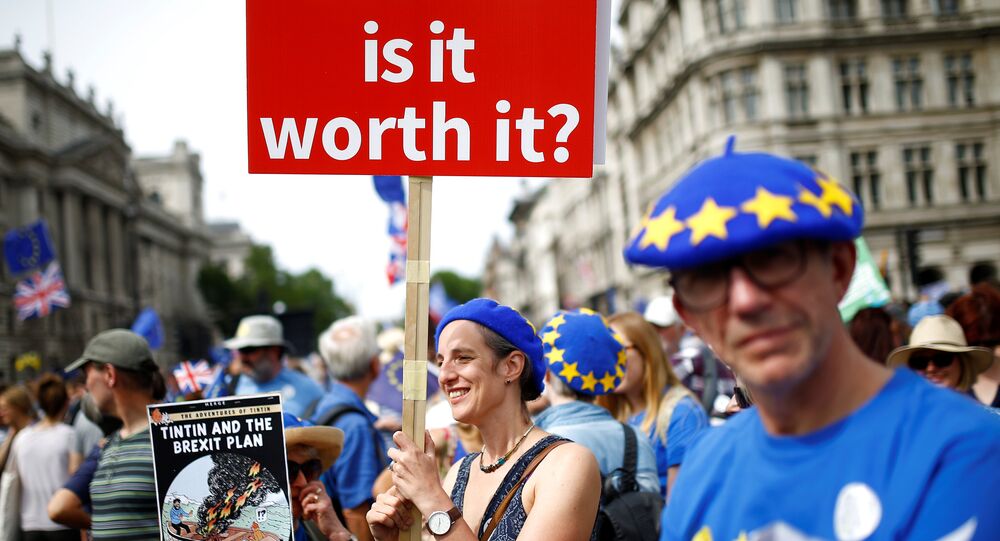 Brexit: UK Gov’t is ‘Negotiating With Itself, Not the European Union’ – Prof

The UK prime minister has defended her Brexit plan and urged to step up negotiations with the EU. She said the White Paper sets out a proposal for an unprecedented economic and security partnership that is in the mutual interest of the UK and the EU.

May has called for the pace of negotiations to be stepped up, saying “we both know the clock is ticking, let's get on with it.” The news comes as the UK’s new Brexit secretary said that Britain will refuse to pay its 39-billion pound divorce bill if the EU fails to agree on a new trade deal.

Radio Sputnik has discussed the latest statements on Brexit by UK officials with Donnacha Ó Beacháin, associate professor at the School of Law and Government, Dublin City University.

Sputnik: What’s your take on the statement made by the new Brexit Secretary? Can Britain actually avoid paying for the divorce bill?

Donnacha Ó Beacháin: Well, it was a very surprising statement because the EU has been from the beginning quite clear on the order, the time frame during which things will take place and it clearly said that and the UK agreed to this. It’s committed already, it’s an obligation, that it will sort out the so-called divorce bill, the rights of EU citizens living in the United Kingdom and the Irish border. These matters will be sorted out as part of a withdrawal agreement and only then, once a withdrawal has taken effect and the UK is effectively a third country, then a trade agreement will be negotiated. And that will take many years, indeed, to negotiate a detailed trade agreement as recent experience with other parts of the world has demonstrated. So it’s putting the cart before the horse. It’s something that actually can’t be done. And it’s what happens when you have ministers who are speaking to a domestic audience and not to an international audience or not being aware that an international audience is also listening.

© REUTERS / Simon Dawson
UK Foreign Minister Hunt Says Risk of Brexit 'No-Deal' by Accident Very Real
Because it’s not possible to simply not pay the amount that’s already been committed to. There were a number of other statements that were made of course by the new Brexit Secretary. One was that, of course, they had to be preparing for a no-deal scenario and that, of course, has been dominating the headlines today, but it’s not quite clear it seems to the British Cabinet as yet the asymmetrical relationship that exists between the European Union and the United Kingdom. That whereas no deal may be the worst case scenario for the United Kingdom, it’s not necessarily the worst case for the EU. Because a bad deal, one that undermines the four freedoms, so-called of good services, capital and people moving freely throughout the EU, that would be worse to allow the third state to cherry-pick the basic principles of the European Union. That would be the worst case. So what the UK essentially is saying is that a no-deal scenario is something that they are not going to shy away from; it’s something that should be considered. It’s really pointing a gun to the head of the UK’s economy and simply saying dare us. And it’s not really an effective negotiating tactic. It pushes back, indeed, the time frame in which the negotiations can take place. And one last thing, that Dominic Raab’s statement which generated some interest, is that he’s still negotiating and his Prime Minister Theresa May is negotiating with their own Cabinet on the White Paper. And this has been a problem for the last two years. That essentially we have a British government that’s negotiating with itself rather than with the European Union.

Sputnik: I suppose his statement further adds to the mire and the confusion that’s currently surrounding the whole Brexit scenario at the moment. Perhaps he’s trying to stamp his own authority onto the role that he’s just been placed into, whether that’s going to help or not, probably not. So, what consequences can this have on the negotiations with the bloc? Obviously, the EU feel that they’ve got the strength of power at the moment, do you think it’s going to further exacerbate what we thought was now going to move forward in terms of the negotiations only going to slow things down you would have thought?

Donnacha Ó Beacháin: I think it will slow things down. Theresa May as your introduction stated has said the clock is ticking and everybody’s aware of that. But the point is that the White Paper is a starting point. It’s not the end point in the negotiations and, indeed, the European Commission has already dismissed its main contents as unworkable, because essentially the EU has been long established and indeed the UK has been a member for over four decades. So it knows all about the EU. And therefore the European Union is not going to destroy or undermine its basic principles to facilitate Brexit. Brexit at the end of the day was a British decision; it’s not a European Union one. And whereas it’s obvious and natural that the United Kingdom will try and preserve its own national interests in negotiations; it’s also equally natural that the European Union will try and preserve its interests. And as has been said many times there are consequences, well-known consequences, for leaving the single market and the customs union. These are not means to punish Britain in any way, these are simply the consequences of a democratic decision and the EU, with or without UK participation, will remain the European Union. I think what’s perhaps more interesting is that, will the United Kingdom remain the United Kingdom post-Brexit? As you’re aware of course there has been a lot of discussion in Scotland and in Northern Ireland, where Theresa May was during the weekend, about their future in the UK post-Brexit. I think that in itself is something that will be on the agenda in the coming years.

Sputnik: The announcement is likely to be welcomed by leading Brexiteers within the Party, what do you think the impact will be on an already divided Conservative Cabinet? We know that the Cabinet is primarily now left with Remainers, so it’s only going to further exacerbate the situation. There’s been a couple of amendments by Theresa May to this White Paper. There’s still a very much a state of flux with it all, isn’t there?

© AP Photo / Matt Dunham
EU's Brexit Negotiator Says May's Chequers Plan Incompatible With Bloc's Guidelines
Donnacha Ó Beacháin: There is. The European Union is still waiting, as I said, over two years now after the Brexit referendum decision; to wait for a realistic proposal from a united British Cabinet who say “this is our position, and this is something we’re willing to stand by.” You would have witnessed, of course, the carefully choreographed meeting at Chequers which was supposed to be an attempt to kind of reset the whole negotiating process with a realistic objective and bring the whole Brexit dream as Boris Johnson referred to it closer to reality. And no sooner was the meeting taking place and the proposal announced that you have the Brexit Secretary resigning, the Foreign Secretary resigning; you had four amendments passed in the House of Commons pushed by a kind of Brexiteer fundamentalists which completely undermined the White Paper. So no sooner was the White Paper put to the European Union as a suggestion it was undermined by the British government itself and by its own ruling party, which of course is dependent on the DUP, a small party, but one that is known for having a disproportionate pull on the Tory Party. And unfortunately we’re all sitting around the European Union watching these internal machinations and divisions play themselves out within the Conservative Party when we should be really focusing on issues that are much broader than that, much greater than that. I think it is part of the problem with the whole Brexit process, that the referendum was never an economic proposal, it was an ideological one. And it was never put to the British people in any detail at all. We have seen how referendums take place in other parts of the world — usually there’s a great amount of detail and discussion before a referendum takes place but in the UK the discussion is taking place after the decision has already been made.