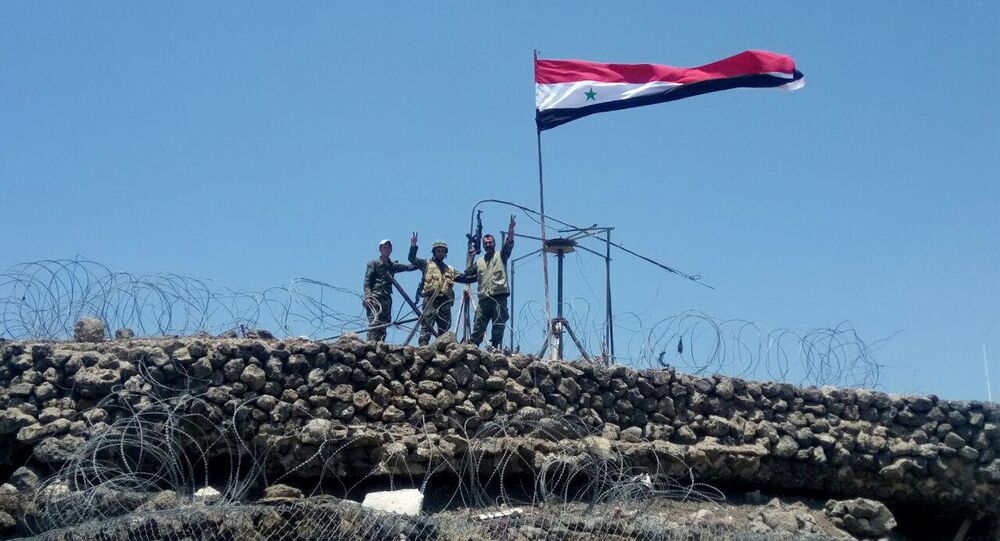 With the Syrian Army on the brink of defeating militants concentrated near the Golan Heights, Damascus is close to wrapping up its campaign to free southern Syria. Under a recently signed deal, rebels who refuse reintegration will be evacuated to areas in northern Syria, with the Syrian Army deploying units to pre-2011 positions along the Golan.

Speaking to Sputnik Arabic about the agreement, retired Syrian brigadier general Ali Maqsoud explained why the initiative is on Syria's side, as far as Israel's occupation of the Golan Heights is concerned.

"After sending those who disagree with the rehabilitation agreement to the country's north, the Army will restore its 2011 borders with Israel. After that, we can negotiate with Tel Aviv, including on the return of the Golan Heights to Damascus. Right now in southern Syria, the advantage is on the side of Damascus, not Tel Aviv," the officer said.

© Sputnik / Mikhail Voskresenskiy
Russian MoD: Militants in Syria Surrender Heavy Combat Vehicles, Munitions
According to Maqsoud, with the failure of its plans to create a buffer zone in southern Syria, Tel Aviv has effectively lost its ability to pressure Damascus. Syria, he stressed, wants to return all of its territories, no matter who occupies them.

With regard to current de-escalation arrangements, the officer noted that the Syrian military has not interfered in Israel's actions in helping militants leave southern Syria through secret routes. "For the Army, the important thing now is to free the entire province [of Quneitra] and establish control. It will be good if this can be done with a minimum of destruction of buildings and infrastructure," Maqsoud noted.

© REUTERS / Gil Eliyahu
An armed man rides a pickup truck at the Syrian side of the Israeli-Syrian border as it is seen from the Israeli-occupied Golan Heights, Israel July 20, 2018
© REUTERS / Omar Sanadiki
Southern Syria: Russian Troops Help Free Captives and Provide Security (PHOTOS)
The Golan Heights is a 1,800 square km strip of Syrian territory occupied by Israel during the 1967 Six-Day War and annexed in 1981. The UN Security Council condemned the annexation and called the decision to impose "Israeli laws, jurisdiction and administration" over the territory "null and void and without international legal effect."

The Israeli Defense Forces were put on high alert in the Golan Heights area in recent weeks amid the Syrian Army's advance toward the border. Last week, Israeli forces attacked army positions in Quneitra. On Monday, the Syrian Army reported capturing a strategic hill near the Golan Heights in an operation to mop up remaining pockets of resistance. Militants began to evacuate from southern Syria on July 15 following negotiations facilitated by the Russian Reconciliation Center for Syria.