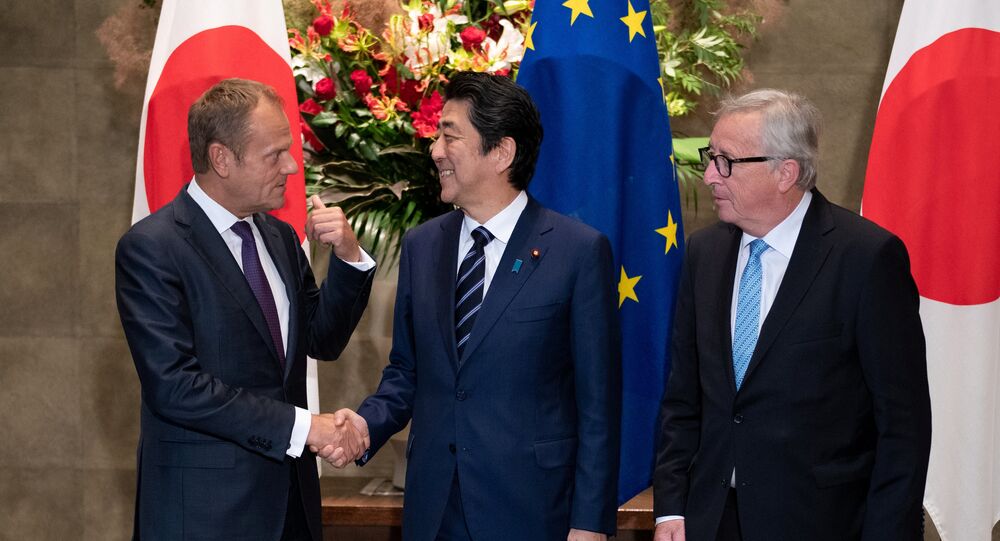 The trade deal between the EU & Japan could impact the UK’s car manufacturing industry and thousands of jobs. Britain will be under pressure to replicate the European Union's trade deal with Japan if it wants to protect thousands of jobs at car companies like Nissan and Honda.

Fears those Japanese firms may pull out of the UK if Brexit creates barriers to trade saw Theresa May hold a summit with company bosses in February. Sputnik spoke to Professor of economics at Bournemouth University Jens Holscher about the implications this could have for the UK.

Sputnik: How damaging could this deal by the EU & Japan be for the UK?

Jens Holscher: It couldn’t do much damage as the UK is just replicating it maybe word by word. That would be the best and therefore no damage.

If the UK finds it difficult then it could be very damaging of course.

© REUTERS / Martin Bureau/Pool
Tusk: EU-Japan Deal 'Clear Message Against Protectionism' Amid Trade Row With US
Sputnik: What impact could this have on the UK’s hopes of trade deals post Brexit?

This case will set a good example for the UK. They will have to more or less have to rely on what the EU negotiates with other countries. That might be the United States, but I’m not 100% sure.

Sputnik: Could this be the beginning of Japan’s car manufacturing business moving out of the UK to the EU?

Jens Holscher: They are looking at that already.

There have been clear indications, but at the moment there’s a lot of uncertainty to what circumstances Brexit will happen. So there move isn’t imminent but they are indeed looking at relocation.

The views and opinions expressed by Jens Holscher do not necessarily reflect those of Sputnik.

Tusk: EU-Japan Deal 'Clear Message Against Protectionism' Amid Trade Row With US

'Deal Between Japan, EU Trying to Build up Their Own Rules' – Researcher