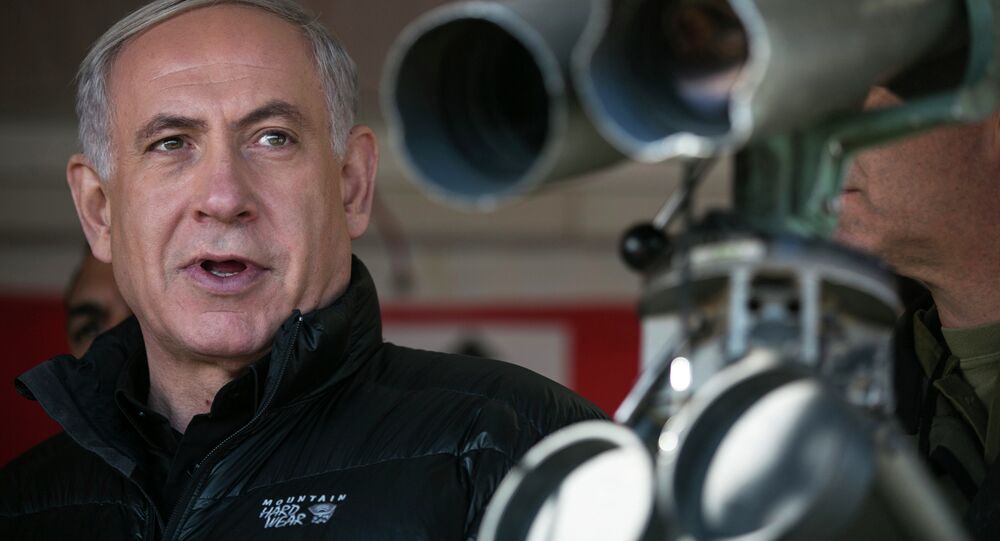 Israeli Prime Minister Benjamin Netanyahu has met with Russian President Vladimir Putin ahead of the latter’s summit with the US president. The visit came in light of Russia announcing that after the end of the war in Syria, all foreign forces will leave the country.

While for Israel removing all pro-Iranian forces from Syria is the number one priority in the region.

Sputnik has discussed Israel's "red lines" in Syria with Efraim Inbar, president of the Jerusalem Institute for Strategic Studies.

Sputnik: In your view how realistic is Israel's wish to see all Iranian and it's affiliated troops leave Syria?

© REUTERS / Omar Sanadiki
Israeli Rockets Strike Syrian Military Position in Aleppo - Reports
Efraim Inbar: I think Iran is the mortal enemy of Israel. It declares day and night that it wants to destroy the Jewish state and Israel is determined to prevent the lebanonization of Syria, of opening a new front like Hezbollah in South Lebanon in Syria next to Israel's border. So I think Israel is talking to the Russians, to Putin, and also to the Americans, and apart from that Israel is acting militarily in order to prevent the presence of Iranian military, of Iranian missiles on the soil of Syria.

Sputnik: How dependent is Bashar al-Assad on Iranian troops in your opinion?

Sputnik: Do you think Benjamin Netanyahu and President Trump will be able to convince Vladimir Putin to limit his support for Iran in the light of US sanctions against Tehran and the possibility of new sanctions against countries that buy Iranian oil, this has been reported in the last couple days of course?

© AP Photo / Pablo Martinez Monsivais
Netanyahu, Trump Discuss Iran, Syria Ahead of Helsinki Summit With Putin
Efraim Inbar: Well, Russia and Iran, of course, have a common interest in supporting the Assad regime, but their interests are not identical. After all, Iran wants to establish a radical Islamic presence in Syria. This is not something that the Russian government is seeing as its own interest. Apart from that, they understand that if there is a confrontation between Israel and Iran, during the confrontation we may hit also targets that are identified with the Assad regime and weaken the Assad regime and I think the Russians are not interested in such a scenario.

Sputnik: If Iranian troops do leave Syria partly or fully is there a danger of a security vacuum in the country that could negatively affect its neighbors, including Israel? And who could then take the burden of then fighting ISIS* and other extremist groups, we've seen this happen historically both in Iraq and in Libya where once the campaigns have finished, the Americans have left, this vacuum was created, this destabilized the situation and these Islamist groups, these radical groups have moved in which obviously then caused this exacerbated situation we find ourselves internationally, what's your take on that then?

Efraim Inbar: I think this is obviously a possibility. After all, the Arab regimes have problems in terms of legitimacy and we've seen it during what's called the Arab Spring, and this is precisely why there's a civil war in Syria, this is why there is turmoil in Yemen, in Libya. Of course, this is a possibility and this is part of the Middle East reality, that the dictatorial regimes may be replaced by chaos.

© AP Photo / Gali Tibbon/Pool
Prime Minister Netanyahu: Israel Ready to Increase Strikes on Hamas as Necessary
Sputnik: And finally how successful has been Prime Minister Netanyahu in his quest to push Iranian troops from Israel's border and to convince Vladimir Putin and Bashar al-Assad to prohibit the deployment of Iranian military installations in Syria?

Efraim Inbar: I think there is a good understanding between Israel and Russia at this time, basically, the understanding is that Israel is not undermining the Assad regime and the Russians allow to some extent a free hand to the Israelis in fighting the Iranian presence. This is the current understanding and I hope it will continue.

The views expressed in this article are solely those of Efraim Inbar and do not necessarily reflect the official position of Sputnik.