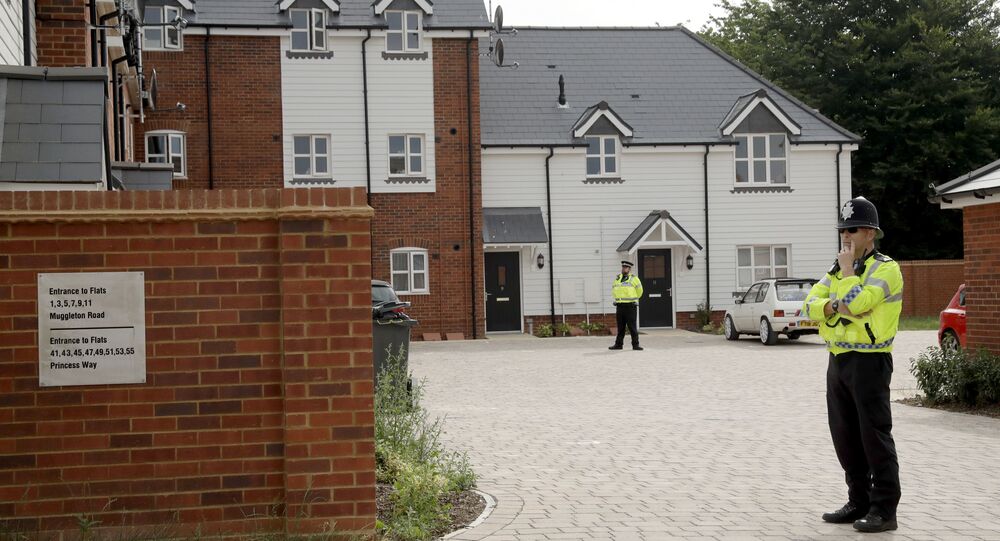 News of the hospitalization of a man and woman believed to have been poisoned in the town of Amesbury, England under mysterious circumstances have prompted some British media to immediately start speculating that Russia was to blame, despite police insistence that there is no evidence to that effect.

A UK police source has told Sputnik that British law enforcement have no information to link the Amesbury suspected poisoning of a couple in their 40s to the widely publicized Skripal poisoning case, which took place in neighboring Salisbury in March.

The source said he felt that the media's response to the Amesbury incident has already been "excessive," adding that the investigation will continue and that the public will be informed based on the statements of police pending further developments. Police statements made to other media have been similarly conservative, emphasizing that they remain "open-minded" about the cause of the incident, and that further tests of the substance that poisoned the couple would continue.

British Tabloids: Russians Did It

However, despite police uncertainty, and just a few hours after the story broke, newspapers began comparing Amesbury to the Skripal case, whose poisoning the UK media and British government blamed on Russia, despite the fact that no evidence of Moscow's involvement has ever been presented.

The Sun's coverage may be the most blatantly accusation, running with the headline "POISON RIDDLE: Amesbury pair could've been poisoned with SAME nerve agent used on Skripals – as terror cops brought in." The newspaper spent much of its coverage of the Amesbury case talking about the Skripals, and even included a picture of a devious-looking Vladimir Putin, whom The Sun had accused just a day earlier of harboring a "two-man hit team" it claimed poisoned the Russian ex-spy and his daughter.

© Photo : the sun/screenshot
Screengrab of The Sun's take on the Amesbury incident.

The Mirror too immediately jumped on the 'Skripal 2.0' bandwagon, categorizing the Amesbury news under its "Sergei Skripal" subsection, and even resorting to misquoting comments by Wiltshire Police Commissioner Angus Macpherson, who told the BBC that he had "no reason to think" the Amesbury incident was connected to the Skripal case. Instead, the Mirror paraphrased Macpherson as saying "there's present indication that the incident in Amesbury is connected to the Skripal case at present…"

The Daily Express ran a similarly sensationalist headline: "Wiltshire major incident: Could this be another nerve agent attack like Salisbury?" and spent much of their article talking about the Skripal investigation. Last but not least was The Daily Mail, which mentioned the Skripals over a dozen times in its piece, including in the headline, and filled the story out with photos and video of Sergei and Yulia, along with a handy map of the region showing Amesbury's proximity to Salisbury.

© Photo : express/sreenshot
Snap of The Express's approach to the story.

Readers Not Buying It

However, judging by reader commentary, UK tabloid readers weren't impressed by coverage of Amesbury. The top rated comments in The Daily Mail called the story an "overreaction" to a likely drugs case, or a "fake news story" to "wrongly blame the Russians to divert from [the government's] EU-friendly agenda…"

"So you want to blame the Russians again? Or take a good look at the security of your own chemical warfare lab in the town," one reader recommended, pointing to the presence of the Porton Down chemical weapons facility 8 kilometers up the road from Amesbury.

Daily Express readers honed in on the fact that the paper, like others, made no reference to Porton Down. "If you mean another staged event, then yes, highly likely!!!" one reader quipped, responding to the provocative question in the paper's headline.

© AP Photo / Matt Dunham
UK Counter-Terrorism Police Join Probe Into Alleged Wiltshire Poisoning
Mirror readers were similarly skeptical. "Here we go again. The police aren't sure whether a crime has been committed, yet the media and security services are trying to link this with the Skripal incident; by the way Sergei and Yulia Skripal made a 'miraculous recovery' and haven't been seen in public since leaving the hospital. Which is to say this isn't just a diversionary tactic to give the government breathing space over their own problems with things such as the state of our NHS and Brexit and a divided government," Notbeingfooled wrote.

But tabloids weren't the only ones to jump to conclusions before any of the facts were known. Papers, news sites and television networks from The Guardian and The Evening Standard to NBC News, CNN, The Washington Post, The Globe and Mail and the The Australian all went with just slightly more muted variations of the tabloids' aggressive attempt to connect Amesbury to the Skripal case.

Russian ex-military intelligence agent Sergei Skripal and his daughter were found unconscious on a bench at a shopping mall in the town of Salisbury on March 4 after being exposed to what UK experts claimed was the A234 nerve agent.

Just days after the incident, Prime Minister Theresa May declared that it was "highly likely" that Russia was responsible for the poisoning, but presented no evidence to substantiate her claims. The allegations pushed London and its allies into a diplomatic spat with Moscow, leading to the expulsion of dozens of diplomats by both sides. In April, Russian Foreign Minister Sergei Lavrov stressed that Russia had not been provided with any evidence of involvement in the alleged poisoning. In May, President Putin said Skripal would be dead if he had been poisoned with a weapons-grade toxic agent. Yulia Skripal and her father were discharged from the hospital in April and May and taken to an undisclosed location.