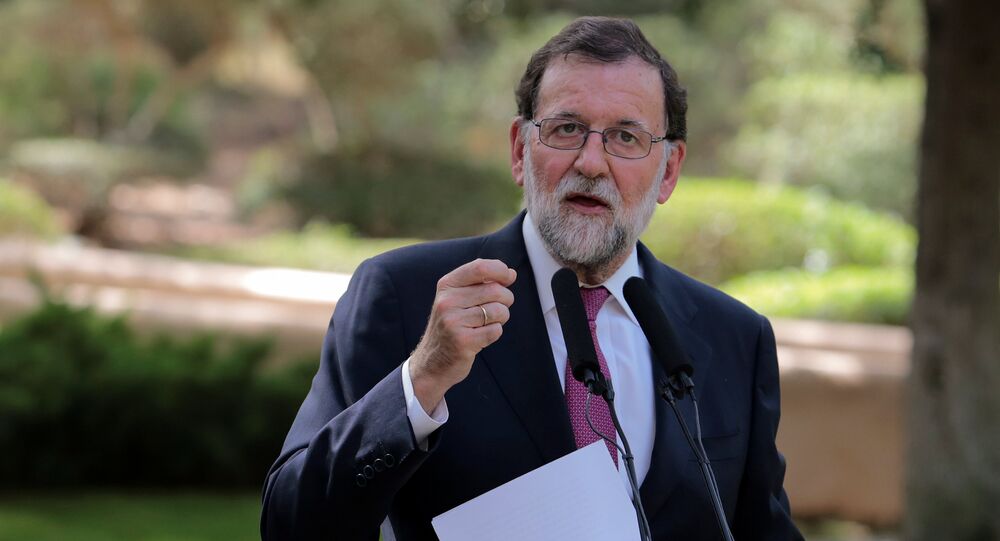 Spanish Prime Minister – Mariano Rajoy – has been removed from his office after losing a no-confidence vote. According to media reports, an absolute majority of Spanish lawmakers endorsed the motion against Rajoy. The leader of the Spanish Socialist Workers' Party - Pedro Sánchez - has replaced Spain's prime minister on his post.

Sputnik: How surprising is Mr. Rajoy's removal from office to you?

Andrew Dowling: Actually, pretty surprising — no one would have predicted this outcome two weeks ago.  In fact, 10 days ago Rajoy’s government had passed the budget for the following 12 months and there was no indication of anything on the horizon that would change things. Then certainly two days later the Spanish Court announced a judgement on these corruption cases. That’s what brought us to the situation we are in today – the announcement of those corruption resolutions.

Sputnik: Why do you think things went down so quickly? What was the game changer there?

Andrew Dowling: The game changer was the damning verdict of the Spanish Court against the popular party, its treasurer and so much of the financing of Spain’s governing party was shown to be explicitly linked to corruption and it proved to be the factor that brought down the government.

© REUTERS / Sergio Perez
Absolute Majority of Spanish Parl't Supports No-Confidence Motion Against PM Rajoy
Sputnik: How damaging is this going to be for Spain’s reputation, both across the European Union and internationally?

Andrew Dowling: Actually, I think it will probably improve Spain’s reputation, because having a government that continues with a very corrupt administration is actually damaging, it would be reputational damage. To actually have a new Prime Minister who’s personally not implicated in any corruption is actually a new opportunity for Spain to try to improve its image. I think one of those great failures of the outgoing government has been its addressing of the Catalan question. And the new government has very much on its agenda to try to lower tension really with Catalonia and try to find a way out of the impasse that’s been really damaging for Spain over the past 12 months.

Sputnik: And let’s look at this leader of the Spanish Socialist Workers' Party Pedro Sanchez. What kind of reputation does he have? And is it going to work in favor of bringing an end to Spain’s political crisis?

Andrew Dowling: We should recall that it's going to be a minority administration. So Pedro Sanchez will be very keen to establish his reputation as being prime ministerial. He received a lot of criticism from within his own party; he was overthrown. In fact, when he tried to establish a similar pact to the the one he established today he was overthrown and then the supporters of his party reinstated him. So he’s got a lot of spinning plates in the air, he’s got quite an unstable alliance, he’s got kind of radical lefts, he’s got the nationalist parties, he’s only got 84 seats for the Spanish socialists. So it’s going to be a real balancing act for him to see if he can hold that alliance together.

Sputnik: It’s going to be a very challenging time for him as well.

Andrew Dowling: It’s going to be a very challenging time, but I think it’s also a great opportunity for the Spanish socialists to relaunch themselves and try to make themselves appear as a governing party.

Andrew Dowling: Spain’s economy is doing generally pretty well so in a sense they can kind of leave well alone. But there’re a number of controversial issues that have been introduced by the right-wing conservatives over the past 5-6 years related to labor laws, related to social protest and I think we see some moderate changes in some of these areas. But I think the biggest single issue in my view in his in-tray is the Catalan question. The Catalan question requires urgent resolution and he made some noises yesterday about establishing new agreements and negotiations with the Catalan government and I think that’s essential that it's addressed as quickly as possible.

© REUTERS / Sergio Perez
Catalan Government Sues Rajoy Over Abuse of Power
Sputnik: What kind of quick solutions might we expect regarding this Catalan issue? Obviously, there’ll be some long-term ones as well but what would be the first steps?

Andrew Dowling: Firstly, just some meaningful negotiations will be in advance of what we’ve seen; some offerings of some major concessions and financing around taxation, around transport, around infrastructure. If these can be put on the agenda very quickly I think that can improve the situation but I think the biggest stumbling block is of course that a number of pro-independent leaders are in prison and I think for the independence forces any agreement to break the impasse in Catalonia requires something to be done about that personas and if they can be kind of released. Even if they’re going to still face charges but they’re no longer held on what we call remand when you are being held awaiting trial. If they can be released I think that would be of great help to the situation; it would reduce tensions.

Sputnik: How’s the EU going to react to these developments in Spain?

Andrew Dowling: I think we can speak about Spain and Italy as two countries that are currently experiencing very similar situations. But I think the major distinction between Spain and Italy is that no major political party in Spain is anti-Europe, no major political party is talking about leaving the euro, or talking about leaving the EU. There’s no questioning of the European Union or the euro in Spain as there is in Italy so in that sense if the new government can show itself to be relatively stable, I think the EU won’t be too troubled by this new administration.