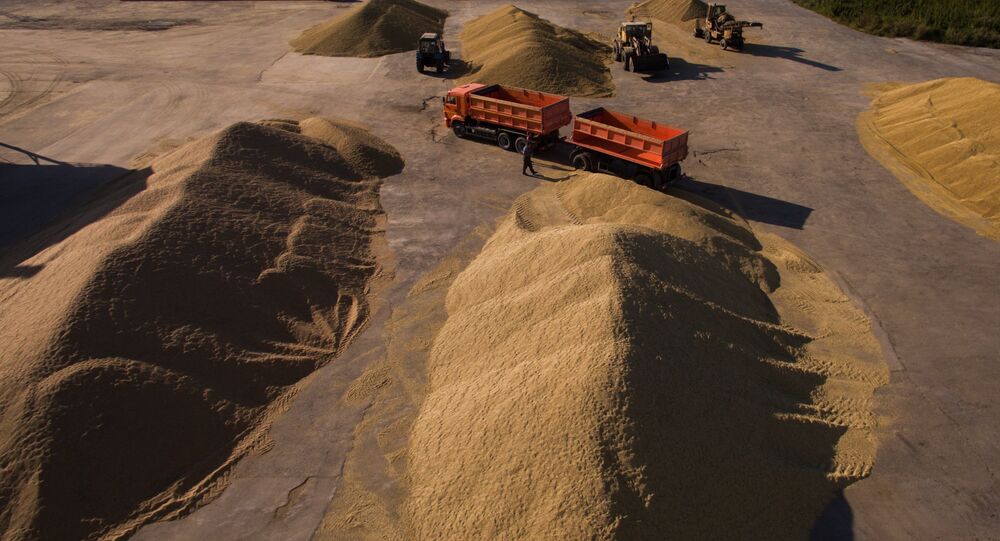 Why the Sky is Literally the Limit for Russia's Agricultural Ambitions

New figures from the Ministry of Agriculture show that Russia's wheat exports have jumped nearly fifty percent compared to last year, allowing the country to retain its title as the world's top exporter. Economic observer Maxim Rubchenko explains why the position of Russian producers will continue to strengthen in the coming years.

According to Russia's Institute of Agricultural Market Studies, Russia's capacity is far from exhausted and can reach up to 40 million tons of wheat and 52 million tons total agricultural exports in 2018.

Russia first outstripped US wheat exports in 2016 and last year topped total EU exports as well. According to US Department of Agriculture figures, Russia now controls 22 percent of the global wheat market in tonnage, with the EU and US controlling 14 percent and 13 percent, respectively).

According to Maxim Rubchenko, a simple explanation for what caused the boom is that Russia offered a combination of competitive pricing and high quality which the world's top grain importers found attractive.

© AFP 2021 / Ludovic MARIN
'Thrown to the Wind': Italian Agriculture Loses Three Bln Euros Annually Due to Russian Sanctions
In late 2017, the US Wheat Associates trade group, the world's largest wheat exporter, announced that it would close its office in Egypt due to Russian competition. "We literally can't compete on the price of wheat in those markets compared to Russia," US Wheat Associates Steve Mercer said.

Also in 2017, France was forced to nearly halve its wheat exports after a drought hit the country, prompting Russia to begin sales to traditional French markets in Africa, including Senegal and Morocco.

Russian wheat is also gaining traction in Nigeria, Bangladesh and Indonesia, and exporters are eyeing Algeria, which plans to lift import restrictions. Last year, Russia even sold 100,000 tons of wheat to Mexico, normally a mainstay for US wheat producers.

As Rubchenko pointed out, "Nearly all market analysts admit that one of the main reasons for the boom of Russia's agricultural industry has been the sanctions war unleased by the West in 2014. Following the imposition of European and US sanctions, Russia announced retaliatory measures, limiting the import of Western food products. As a result, food imports from the EU fell by 40%, freeing the market for domestic production." In the intervening years, Russian agricultural imports dropped from 35 percent of domestic consumption in 2013 to no more than 20 percent today.

On the export front, a campaign by the government to support producers helped expand Russia's agricultural footprint abroad. The state increased concessional lending and grants, and made corrections to legislation regarding land, allowing for a substantial increase in the sowing area, which exceeded 80 million hectares as of 2017. Subsidized rates for rail transport, the construction of new grain terminals at Russia's ports and the creation of a network of wholesale distribution centers are also expected to help.

© Sputnik / Mikhail Mordasov
Grain terminal in the port of Novorossiysk

"And that's not the limit, not by far," Rubchenko stressed. Russia has at least two other cards up its sleeve, including large amounts of unused farmland.

© CC BY 2.0 / Ian Sane / US Wheat
Chinese Authorities Lift Ban on Imports of Wheat From Six Russian Regions
At a departmental meeting this month, agriculture minister Alexander Tkachev noted that Russia "regularly faces a situation you will not find in other countries: namely, the existence of abandoned farmland." According to the minister, it's "absolutely realistic to recover at least ten million hectares."

To this end, the ministry has prepared new draft laws aimed at simplifying procedures for the recovery of these lands, increasing taxes on unused farmland. The government has also increased financing for the agricultural industry, from 242 billion rubles (about $3.85 billion) last year to 272 billion ($4.32 billion) today. Additional funds are expected to be provided for rural development, preferential short-term credit, and the modernization of machinery and equipment.

Finally, according to Rubchenko, there's one more factor playing to Russia's favor: climate change. A recent study by Kansas State University noted that compared to the late 1980s, average temperatures in Eurasia's grain-growing regions are set to rise by 1.8 degrees Celsius by 2020 and 3.9 degrees by 2050. Combined with new technologies, these changes will allow Russia to turn an additional 57 million hectares of land into agricultural land.

© REUTERS / Ilya Naymushin
Climate Change to Make Siberian Agriculture Conditions Suitable for Watermelons
The boom isn't limited to grains, either, the observer noted. Russia has already replaced imports of pork and chicken with domestically produced pork and poultry, and has become the leading global producer of sugar beets. The harvest of greenhouse vegetables continues to grow by double digits every year. In the near future, Russian farmers plan to expand milk, fish and meat exports to Turkey and China.

On May 1, Russia will lift its restrictions on Turkish tomatoes, and Tkachev hopes for a tit-for-tat response from the Turkish side on Russian meat, dairy and fish products. As for China, the minister said that the Chinese side has already agreed to buy Russian processed meat, in the form of canned goods, soups, etc., with negotiations on other products continuing.

Russia Ready to Develop Cooperation in Agriculture With US