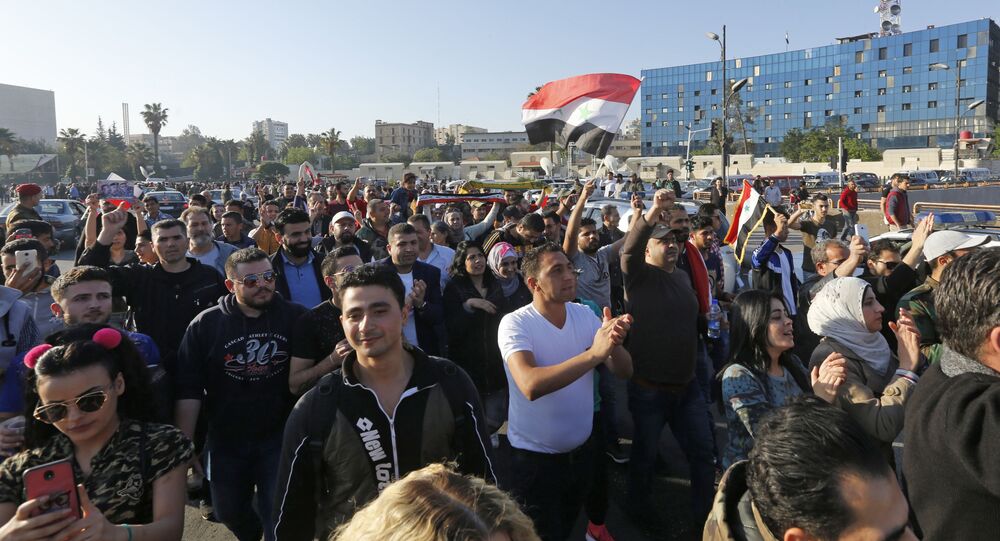 Dr. Taleb Ibrahim, deputy director of the Damascus Center for Strategic Studies, has shared his insights on the situation in Syria after this morning's attack on the country by US, French and British missiles.

Syrian President Bashar Assad has announced that the West's cruise missile and bombing attack on his country has only served to unite the population and increase Damascus's resolve to continue "fighting and crushing in every inch of the nation."

Speaking to Radio Sputnik, Dr. Ibrahim confirmed that Syrians were "not frightened" following this morning's attacks and said that the Western tripartite's attacks did not have the desired "psychological" impact of spreading terror among the population.

Instead, he said, people are rallying in support of the army in its mission to liberate the country "and in its confrontation with Western powers." The political scientist noted that Syrians are becoming more and more convinced that the US, the UK and France were all part of the same "terrorist axis fighting the Syrian government."

© AP Photo / Hassan Ammar
Syrians Celebrate Downing of 'Invincible American Tomahawks' (PHOTO, VIDEO)
Ibrahim praised Syria's air defense systems, confirming that the majority of the missiles were shot down before they ever reached their targets. "This proved the great efficiency and capability of Russian air defense systems," he said.

Asked to comment on the pretext for the attack, namely the alleged chemical attack in Douma, which Western powers blamed on Damascus, Dr. Ibrahim emphasized that "nobody proved that there was any chemical attack."

Pointing to the arrival of experts from the Organization for the Prohibition of Chemical Weapons (OPCW) in Damascus on Saturday, the analyst noted that Washington and its allies decided that they had to attack before the investigation was completed.

"I think that they are sure that there wasn't any chemical attack, and the final report of the [OPCW] commission will prove that. This report will prove that the United Kingdom, the United States of America and France are lying!" he emphasized.

© AP Photo / Julie Jacobson
Russian UN Envoy Calls US 'Aggressor-State' as Haley Says Time for Syria Talks Over (VIDEO)
The airstrikes serve as a "big story to cover their lies," the academic explained. "By attacking now, everyone in the world is looking at the missile attacks on Syria, and nobody is talking about the fake news — about the lies which had been committed in Syria several years ago to justify the war against the state and the population of Syria."

There was no chemical weapons use in Douma, Dr. Ibrahim insisted, pointing to the OPCW's 2014 report confirming that Syria had destroyed its stocks of these deadly weapons. The West is "using these lies" because they cannot admit to the public that Bashar Assad and the Russians are fighting terrorism in Syria which is supported by MI6, the CIA and French intelligence, he said.

According to the academic, Syria has become victim to "a kind of theater play" put on by "mercenary media" outlets working hand in hand with militants on the ground. Meanwhile, the real suffering of Syrians at the hands of Daesh*, Nusra Front* and other Islamist groups has been ignored. "Nobody in the West is talking about that. They are caring only about their agents, who are actually the terrorists," he lamented.

The views and opinions expressed by Dr. Taleb Ibrahim are those of the expert and do not necessarily reflect those of Sputnik.