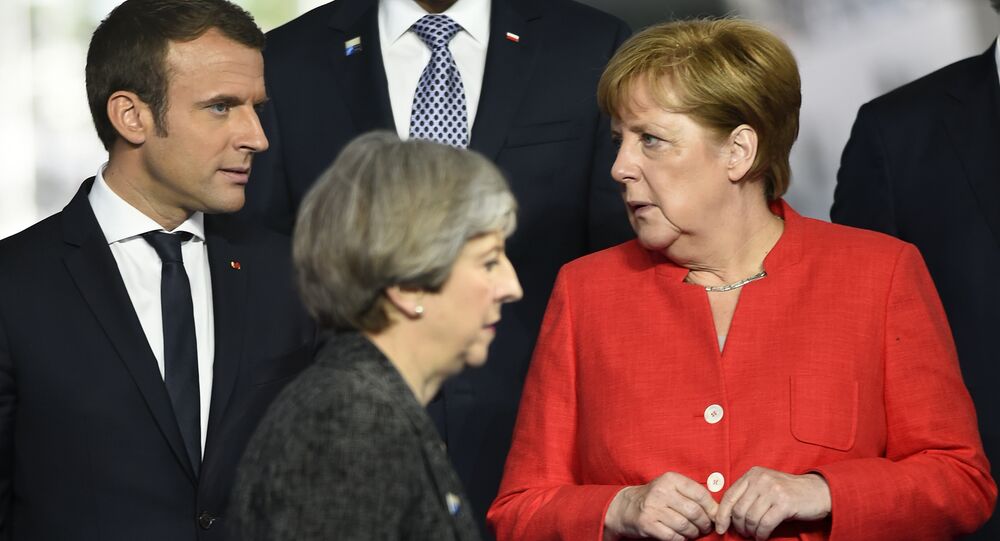 'UK Trying to Return to Tradition of Domination in Europe' – Journalist

The UK is set to launch a “counter-propaganda war” designed to tackle the alleged Russian threat, according to a plan dubbed the “Fusion Doctrine,” announced by Theresa May on Tuesday as part of a national security review. Sputnik discussed the UK’s overhauled security policy with Jury Turin, a philosopher and journalist living in Denmark.

Sputnik: What is your take on the overhauled security policy?

Jury Turin: Here in Europe it’s very mixed feelings about the things that happened because it’s actually quite dangerous, more than people can imagine. First of all, Britain, accused Russia without any serious proof. The question is why there’s no proof, there is no proof because it’s a demonstration of power, actually. It is a way to demonstrate power, and not so many people in Europe can predict what Britain will do next and what’s the plan of this game. It’s actually a game and everybody understands it. By the way, right after the killing of Mr. Glushkov* in London, a killing that is not much discussed now, because everybody is discussing Skripal, but Glushkov was killed the same way Mr. Berezovsky was killed,  after Berezovsky's decision to move back to Russia, it looks like a demonstration of power generally. In Europe, people are quite divided about this issue because there is no proof, and it’s a demonstration of no proof no serious proof. It’s like an ultimatum to the European countries first of all, “are you with us or are you with Russia?”

Sputnik: Do you feel this is actually dividing European countries? Do you feel that there is really a feeling of the fact that Britain is trying to put forward this very powerful image before Brexit?

Jury Turin: Yes, it’s not the only image, it feels like Britain is trying to come back to its old tradition of domination over Europe, over the rest of Europe. You can see first of all that it’s Germany which is not really interested in war, the United States also, you can ask the question, for example, if the Trump administration is interested in a war with Russia. The answer is no. But you can’t say no if you seriously talk about what’s presented by the British administration. So Britain is trying to unite Europe without any serious reason, there is no more economical power, because Germany is stronger than Britain, and there's not so much political influence of Britain in Europe. Britain is trying to re-win this influence by forcing European countries by an ultimatum, are you with us, or are you with Russia?

© Sputnik
Guilty: Radicalized Muslim Teacher Planned to Use 'Army of Children' for UK Attacks
That’s the game, and it’s very important to predict what’s going to happen next, what is the British plan. Because Britain has been playing for centuries, the British administration is the most experienced administration in Europe, it’s the strongest military in Europe and most independent from NATO actually. So European people are divided, it's not important which government they have in Europe, because many small countries in Europe, from Estonia to other small countries in Northern Europe, for example, are quite dependent on the deep state in America. But people in these countries definitely don’t want confrontation with Russia. I think it’s quite important to predict what’s going to happen next, and what’s the point of the British attack, the British game against Russia.

Sputnik: Now in this new security policy it seems that Russia is essentially in one tier with North Korea and terrorism in this overhauled plan, what’s your take on that, is the perceived threat from Russia really that bad?

© AFP 2021 / JEAN-PIERRE CLATOT
Russian Envoy to UK Asks Johnson to Explain Remark on Strikes Against Damascus
Jury Turin: Britain started this game against Russia not to isolate Russia because it’s not possible to isolate, but to receive some dividends from it. It’s very important to understand what kind of dividends Britain can have out of this because if you imagine what happened with the Islamic world, the Islamic world twenty years ago totally lost the propaganda war. And then, for those who lost the propaganda war, everything should be over, because now you can do anything to the people who say we are Islamic radicals, we like Islam, we're Muslims and Islam is a religion of peace. If you say to European people, it doesn't matter who you are, one can do anything to such people, because such people are bin Laden, the terrorists, they’re everywhere. So the idea is to put Russia generally, like a nation, like a country, like a civilization on this list of something unacceptable. If you say something about Russia whether it’s true or not is not important, if you say something good about Russia then you are an enemy. That's the general strategy of this.

*Nikolai Glushkov, 68, was the right-hand man of the deceased oligarch Boris Berezovsky, was found dead at his London home on 12 March 2018. Police in London launched a murder investigation into his death.