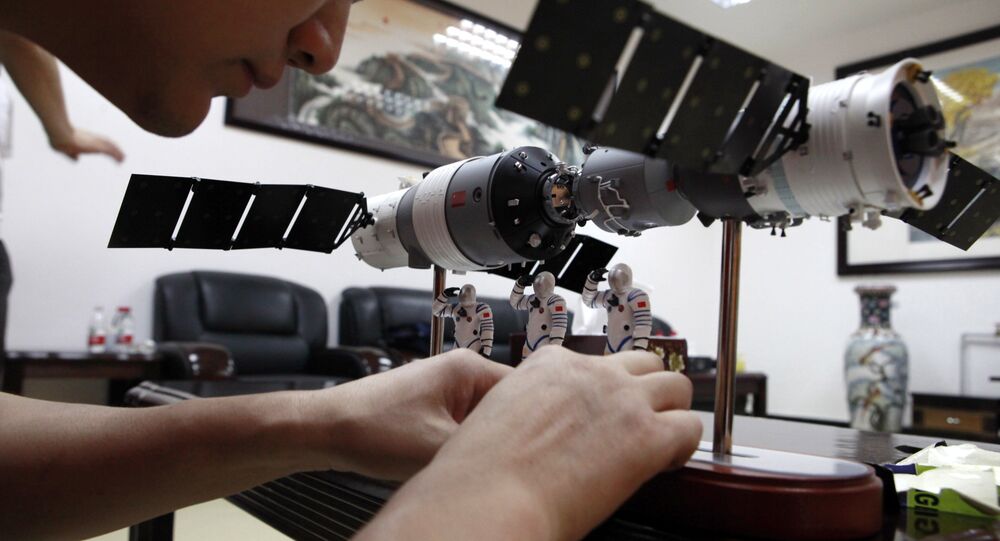 China’s first space station, the Tiangong-1, will crash down to earth at some point over the next few weeks. Experts say debris could hit Europe, the US, Australia or New Zealand. Sputnik spoke with Dr. Jongrae Kim, aerospace specialist and assistant lecturer at the University of Leeds, about the falling space station.

Dr. Jongrae Kim: Once this satellite enters the atmosphere, then most of the parts will be burned. The main problem is that the satellite is so big compared to the usual satellites, that some of the debris might hit the ground.
It has happened before, quite frequently actually. What happens is that all satellites that go up must come down to the Earth. Otherwise they become 'space junk'.

Sputnik: Have we ever been in this situation before? Do we know what to expect when it comes to plummeting space debris?

Dr. Jongrae Kim: This is not the first time a big satellite has entered the earth’s atmosphere. It happened before, at least twice, in the 1970's and the 1990's. One was the US's and one was the Soviet Union's satellite. When this has happened before, whilst some of the debris has reached the earth’s surface, it never has hit anyone, nor caused any fatalities or problems to infrastructure.

Sputnik: What actually happens when something ‘enters into the atmosphere’?

Dr. Jongrae Kim: When the satellite is in space, it means virtually there is no air, so it doesn't have any drag. Once it gets closer to the atmosphere, the air particles start hitting the object. Take an aircraft for example. In the air, they experience some kind of drag, but that isn't a problem for the aircraft, because their speed is not so high, but for example if the aircraft is supersonic, they normally experience a lot of heat, because it smashes into the earth with such extreme speed, that generates quite some heat. A similar thing happens with the satellite. Once the satellite enters the atmosphere, the speed is so great that when it collides with the air particles, the heat energy is enormous, and it explodes.

Sputnik: What speed do you think that the Tiangong-1 is travelling at right now?

Dr. Jongrae Kim: I couldn't tell you for sure, but each orbit has a particular speed they should keep, in order to stay in a specific orbit. In this case (the case of the Tiangong-1 space station) they are slowly decreasing, losing the kinetic energy and potential energy by various forces, like small air particles and other external disturbances. Once they enter the atmosphere, then how much energy they have depends on their current orbit.

Sputnik: Is space debris, or 'space junk' an issue for the space stations?

Dr. Jongrae Kim: The International Space Station is the biggest human made satellite orbiting the earth. These larger sized satellites have a bigger probability that they might be hit by orbiting 'space junk'. They have some protocols that they keep monitoring, to ensure that they know what to expect when it comes to space debris colliding with the Space Station. They go through these emergency procedures in the case that they are hit by floating debris.