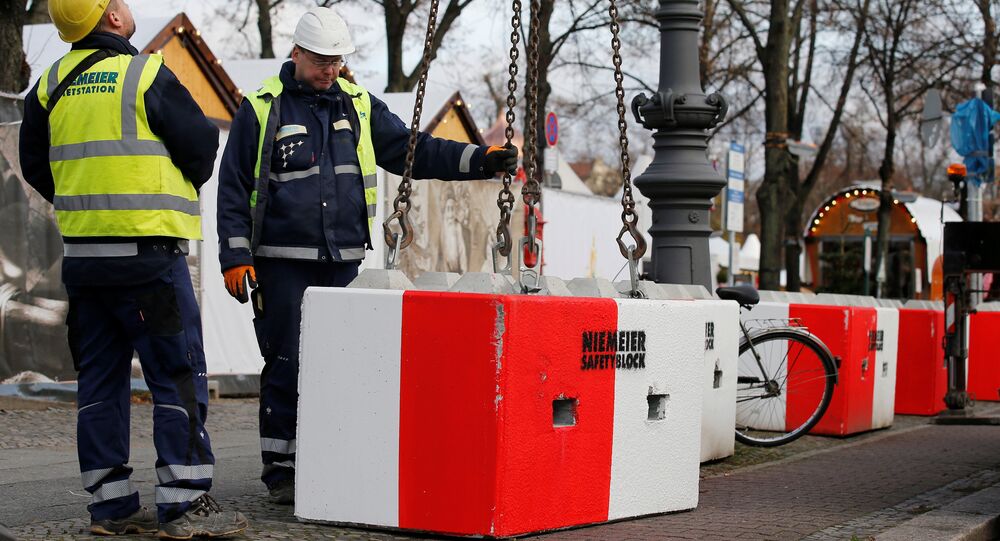 With Christmas market season in full swing in Germany, Berlin's city hall is taking more security measures to avoid a repeat of last December's deadly terrorist attack. The press service of the Berlin Senate's board told Sputnik that both city authorities and traders should be responsible for public safety.

On December 19, 2016, a truck drove into a crowd at a Christmas market in the center of Berlin, killing 12 people and injuring over 40 more.

Now that the season of Christmas fairs is already under way in Germany, Berlin city authorities are debating who should pay for security at these events.

"Security spending should always be distributed among several entities. Private organizers bear the same responsibility as the Senate. The Senate provides a sufficient amount of material and police – both in uniform and in civilian clothes – to protect people. It costs money which should be paid by the public. This is correct, and we stand for it," the press service of the Senate's board told Sputnik Germany.

Michael Roden, chairman of the Berlin Union of Exhibitors, for his part, said that "in addition to police, we have a private security service which is located at the entrance [to the Berlin Christmas fair] and operates in two shifts."

He was echoed by Klaus Jurgen Meyer, head of the local labor community City e. V., who said that "we have developed a security concept in the past 34 years."

"Of course, since last year we have paid special attention to the issue of security. We implemented all the tasks, cooperating with security services and the law enforcement department. I think that all visitors can come to the Christmas Fair and have a good time there," he said.

Werner Hammerschmidt, head of the Federal Union of Exhibitors and Market Traders, is convinced that "ensuring the safety of Christmas bazaars from terrorist attacks is tantamount to maintaining public safety."

"The authorities' security measures against terrorist acts must be paid from the state budget. We are up in arms against transferring expenses to the owners of stands [at Christmas fairs]," he pointed out in an interview with Sputnik.

In the German federal state of Hesse, "security measures are carried out by the municipalities," according to Roger Simak, head of the land association of market trading and exhibitors of Hesse.

"We, the exhibitors, take care of safety at the Christmas market. Like football matches, this is a state task — to ensure security everywhere," Simak said, referring to specific security measures, including the so-called "Lego cubes from Merkel", large water tanks and more police and security personnel.

The city of Dortmund is hosting one of the biggest Christmas markets in the country, due to be visited by more than two million visitors. Verena Winkelhaus, head of the Westphalian Union of Market Trade and Exhibitors, told Sputnik that the city has developed its own concept of security.

© AFP 2020 / CLEMENS BILAN
Police patrols at the reopened Christmas market near the Kaiser Wilhelm Memorial Church in Berlin on December 22, 2016

"During the Christmas fairs, the entire ring road is completely closed to the movement of trucks," she said, adding that the owners of the stands also do not sit on their hands.

"We have reviewed the part of our security concept related to terrorism and evacuation. Now the concept stipulates that on each square there is someone who, in case of emergency, can transmit a message using a mobile phone or radio communication," she explained.

No Hiking Prices for Gluehwine

Roger Simak, discussing the economic cost of increased security, believes that no trader wants higher prices for mulled wine, sweets and children's merry-go-rounds at the expense of allocating additional sums for security.

"If prices [on these products and entertainment] prove to be too high, events like Christmas fairs will stop being held," Simak said.