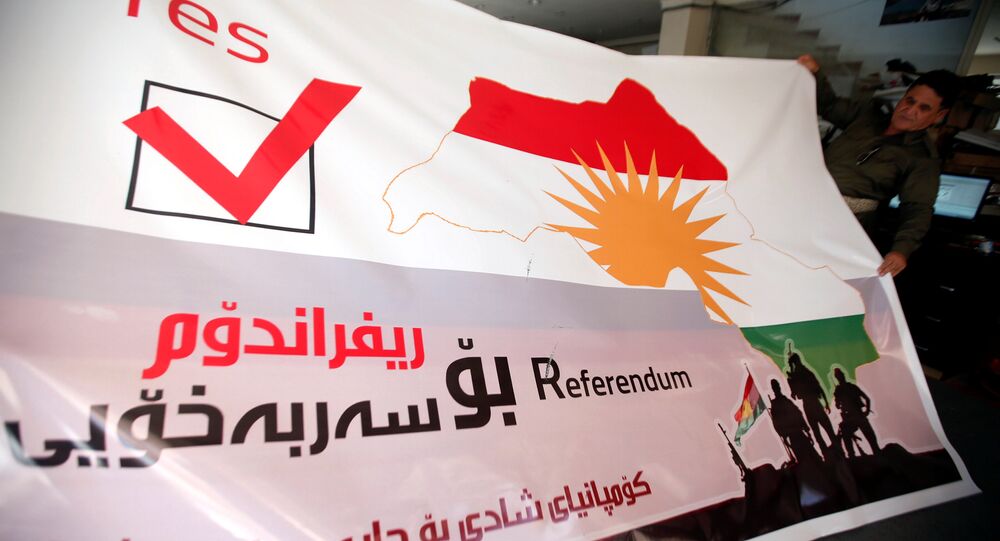 If the Iraqi Kurds proclaim independence in their September 25 referendum, Israel will be the first country to recognize it, Aydin Selcen, Turkey's former consul general in the Kurdish Regional Government's capital Erbil, told Sputnik.

Commenting on the upcoming referendum on independence in the Kurdistan region of northern Iraq in an interview with Sputnik Turkey, the Turkish former consul general in the Kurdish Regional Government's capital Erbil said that it is Israel which will be the first country to recognize the independence of the region because Tel Aviv is interested in buying oil there.

Aydin Selcen pointed out that on the eve of the referendum scheduled for September 25, the leading Kurdish political parties remain at odds over the matter. There is no unity of opinion, which is a negative factor.

"There are two influential political structures in the region — the Kurdistan Democratic Party (PDK) with its center in Erbil, and the Patriotic Union of Kurdistan (PUK), the central branch of which is located in the eastern Iraqi city of Sulaymaniyah," Selcen said.

© AFP 2021 / FABRICE COFFRINI
Iraqi Kurdistan to 'Pay Price' for Independence Referendum - Turkey
He recalled that prior to the decision to hold a referendum, the two parties unsuccessfully "tried to hold talks, resume the activities of the Kurdish parliament and discuss pressing issues of an administrative nature."

"With time ticking until the referendum, the main political parties [of Iraq's Kurdistan] are still at loggerheads over a number of key issues," Selcen said.

Meanwhile, he added, "there are some positive factors from the Iraqi Kurds' point of view.

"Under the pretext of a US intervention and the fight against Daesh, the Kurdish Regional Government was able to significantly expand the boundaries of its territory," Selcen said, adding that Lebanon could fit five times into the area of Iraq controlled by Kurds.

According to him, there are deposits of minerals and fertile agricultural areas in Iraqi Kurdistan, where approximately six million people currently reside.

"There is also some international support, but not in terms of recognition of independence. As you know, declaring one's independence does not mean being recognized as an independent state," Selcen concluded.

On Tuesday, Israeli Prime Minister Benjamin Netanyahu said that "while Israel opposes terrorism as a whole, it supports the legitimate efforts of the Kurdish people to achieve their own state."

In June, the President of Iraqi Kurdistan set September 25 as the date for the referendum on the region's independence from Iraq.

© AFP 2021 / AHMAD AL-RUBAYE
Iraqi Kurdistan 'Has No Plans' to Create Kurdish States in Iran, Turkey
The decision prompted harsh criticism from a number of states, including Iran, Iraq, Turkey and the United States, which claimed that Iraqi Kurdistan's independence referendum posed a threat to stability in the region, and stressed the importance of Iraq's territorial integrity.