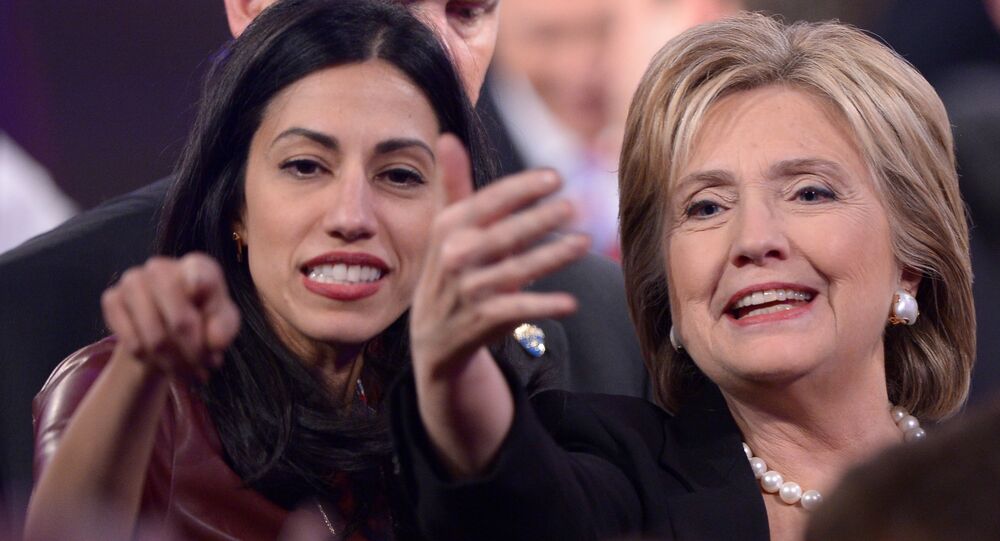 Hillary Clinton and her top lieutenant Huma Abedin supported the Muslim Brotherhood and other Islamist groups during the time when they ran the State Department as part of a US strategy going back 60 years, US analysts told Sputnik.

WASHINGTON (Sputnik) — Abedin has been accused of having ties or sympathy for the Muslim Brotherhood and other extremist Islamic groups that rose to power or influence while she worked for Hillary Clinton at the State Department from 2009 to 2013.

"There are a lot of stories going around about Huma Abedin as a Saudi-Muslim Brotherhood plant, but the truth is much more alarming," Middle East analyst and political commentator Dan Lazare said.

Abedin is now widely expected to become White House chief of staff if Clinton is elected US president next Tuesday.

"The United States has pursued a consistent pro-Muslim Brotherhood, pro-Salafist policy since the opening days of the Cold War."

Successive US administrations had followed this policy to maintain the long-standing US-Saudi alliance, and because they believed in the Muslim Brotherhood as a counterweight to Communist or radical-nationalist influence in the Middle East, Lazare explained.

© REUTERS / Carlos Barria
If Hillary Wins: These People May Play a Role in Clinton's Administration
Also, the CIA had held a long-standing belief in Central Asia as the soft underbelly of the Soviet Union, Lazare added.

"What better way was there to destroy the Soviets than to encourage Islamic fundamentalist penetration or subversion from within? Washington was interested in jihad long before the Saudis were."

However, this policy hit a significant setback when al-Qaeda carried out the September 11, 2001 terrorist attacks that killed nearly 3,000 US citizens, Lazare acknowledged.

"But we know what happened next: The Saudi-Salafist angle was hushed up while blame was shifted to secular-nationalist Iraq. After the briefest of interruptions, the US-Saudi alliance was once again up and running."

In this long-established atmosphere, Abedin’s family background and ties were not seen as unusual or alarming, Lazare explained.

"If Abedin's Saudi-Muslim Brotherhood ties failed to raise eyebrows in Washington, it is because no one saw them as the least bit problematic."

© REUTERS / Brian Snyder
Mounting Scandals Risk 'Forcing Hillary From Office' If She is Elected
Over the decades, Bill and Hillary Clinton have raised as much as $80 million from various Arab gulf sources, Lazare noted.

"Given all this, Huma Abedin seems like distinctly small potatoes."

Abedin was probably protected by Clinton from ever having to undergo routine vetting before serving as her top lieutenant, veteran former CIA counterterrorism officer Philip Giraldi told Sputnik.

"I would suspect that she [Abedin] was never properly vetted by State Department security. Senior members of an administration are often allowed to bring in their own personal staff."

If objections were raised regarding Abedin’s background, Clinton could have insisted that she be cleared anyway on her own authority, Giraldi explained.

"That is precisely how folks like Doug Feith and Richard Perle were cleared at the Pentagon in spite of their counter-intelligence FBI files based on their sustained contact with Israeli intelligence officers. Paul Wolfowitz cleared them on his own authority over the objections of those who did the investigations."

Clinton to Further Stir Up Syrian Conflict if Elected President

Distant Possibility of Impeachment Looms for Clinton If Elected President

Clinton Campaign Calls Wikileaks Docs 'Fake' Even Before Their Release