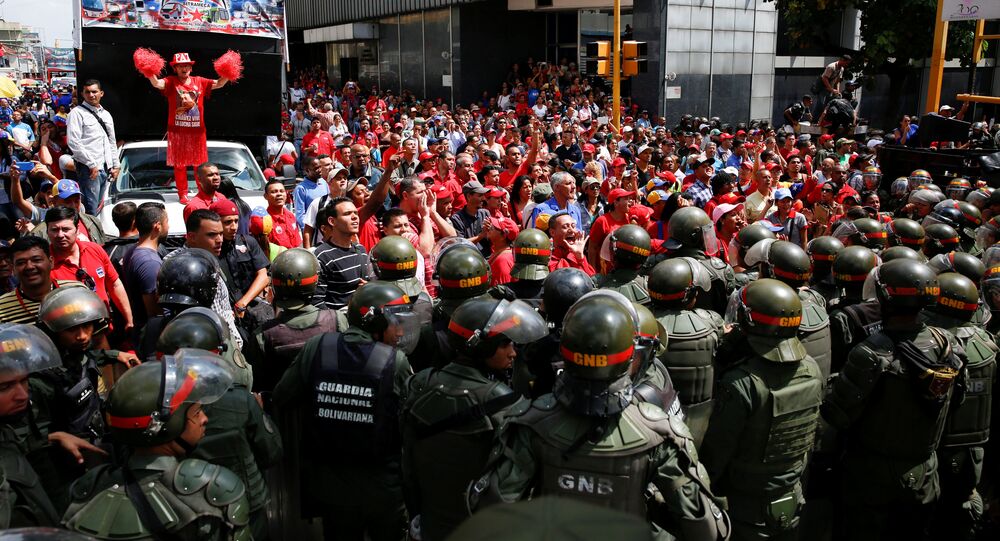 The effort of Venezuela's opposition to oust President Nicolas Maduro has left the country in political gridlock, while the army still supports the head of state.

© REUTERS / Carlos Garcia Rawlins
Bolivian President Condemns 'Coup' Against Venezuelan Leader
MOSCOW (Sputnik) — The military, which often had a final say in Venezuela’s political history, might play a decisive role in this conflict fraught with bloodshed and further impoverishment of Venezuelans.

Maduro came to presidency upon the 2013 death of iconic leader Hugo Chavez. While Chavez rule was marked with high prices for oil, necessary to keep the economy of the oil-producing Venezuela afloat and widely used to support the poorest and most vulnerable members of society, Maduro's years in power have been hampered by turbulence on global oil market that devastated Venezuela’s economy.

The country started to face shortages in medicine, food and electricity supplies. And though in recent months, the leftist government started to relax price control system, in place since 2003, to allow food sales at market prices in several Venezuelan states and somewhere in Caracas, just few could actually afford to pay it. As Ricardo Hausmann, the director of Harvard's Center for International Development, told the CNBC broadcaster in July "one monthly minimum wage can buy you 33,000 liters of gasoline, but only 18 pounds of beef."

The situation has been exacerbated by three-digit inflation. According to the International Monetary Fund (IMF), Venezuela's inflation rate will reach 475 percent by the end of this year and risks to rocket to 1,660 percent in 2017.

Meanwhile, Maduro, as his opponents claim, has moved toward an increasingly autocratic rule.

Earlier in October, the Supreme Court took budgetary authority away from the National Assembly, which is controlled by the opposition. Last Friday, the National Electoral Council (CNE) put an abrupt stop to a nearly year-long push campaign of collecting signatures for referendum that might see the unpopular leftist president leaving the office on accusations of breaking with democracy and human rights and ruining economy.

© AFP 2021 / George Castellanos
Venezuelan Police Officer Fatally Shot in Anti-Government Protests
According to the CNE, this campaign was matched with widespread irregularities that put into question the validity of signatures that were already collected as some 30 percent of them belonged to children or to already deceased Venezuelans.

That argumentation fell on deaf ears — enraged by this suspension of push for a referendum to remove Maduro, his opponents from the Democratic Unity Roundtable (MUD), an alliance of a dozen center-right parties, called the CNE decision a "rupture of constitutional order" and a de facto coup of the legislative branch. On Tuesday, the National Assembly voted to put Maduro on trial.

On Wednesday, the opposition leader and Miranda State Governor Henrique Capriles initiated a large-scale peaceful protest across the country, which saw hundreds of thousands people coming to the streets, to defend the nation’s right to a referendum on Maduro's recall. It ended up in police using tear gas against the opposition protesters with some 120 people wounded and one policeman shot dead.

"What I expect is the continuation of the situation which is basically a political stalemate: the opposition is gaining popularity but can legally not go further," Dirk Kruijt, emeritus professor of Utrecht University in the Netherlands and a prominent expert on Latin America, told Sputnik.

Unlike other countries in Latin America, such as Brazil, where Dilma Rousseff was removed from the presidency in August, Venezuela’s National Assembly do not have a legal right to impeach the president as this power lies with the Supreme Court. The Court is dominated by leftists loyal to Maduro, so it has never voted against him.

Ironically, when opposition-led National Assembly voted on Tuesday to put President Nicolás Maduro on political trial, a lawmaker from Mr. Maduro’s Socialist Party Edwin Rojas, mocked this vote as "a cheap copy of impeachment," adding that "We are not Brazil."

Besides, not only the judiciary is on Venezuelan leader's side, but also is the army.

© AP Photo / Ariana Cubillos
Venezuela On-Edge as Right Wing Attempts Soft Coup on Maduro
"The armed forces are (still?) supporting the president. Even before the electoral victory of Chavez the Venezuelan army was radicalized; after the failed coup in 2002 [which saw that Hugo Chavez ousted from office for 47 hours, before being restored by a combination of military loyalists and support from some of Venezuela's poor] the armed forces were purified. Intelligence is shared with Cuban advisers. Ultimately, Maduro’s fate is in the hands of the army," Dutch expert explained.

Back in July, in a clear attempt to shore up armed support, Maduro announced that he was putting all the country’s cabinet-level departments under the leadership of the defense minister, Vladimir Padrino Lopez, whom he elevated to a "superminister" position. The next day Venezuela’s military took over operations at five high-volume port cities in a bid to ensure that commercial activity continues as Venezuela’s economy collapses.

No surprise that the defense minister stated this week it was necessary to "reiterate our unconditional loyalty and unbreakable commitment" to Maduro.

On Monday, the Venezuelan president met with Pope Francis privately at the Vatican, and upon these talks it was announced that the Holly Sea accompanied by the former presidents of the Dominican Republic, Leonel Fernandez, and Panama, Martin Torrijos, and former Spanish Prime Minister Jose Luis Rodriguez Zapatero would mediate a dialogue between the opposing sides. The talks are set to begin this Sunday in the Caribbean island of Margarita.

"There is no alternative to dialogue and peace. We want dialogue because we want peace and prosperity for the people," the president, who accuses the opposition of seeking a coup with support from the United States, said on Wednesday at a rally attended by thousands of his supporters.

"Pope Francis also successfully intermediated in the apparently eternal conflict between Cuba and the United States. Venezuela’s people is extremely Catholic, the army officers are recruited from the poor and lower middle classes and the pope is popular (and a Latin American). One never knows. Vatican’s diplomacy is not one of the worst in the world," Kruijt commented on the prospects for the international mediation.

Meanwhile, some opposition leaders initially said they refuse to participate in conciliation talks unless the dialogue is held in Caracas. Opposition's call for general strike Friday and November 3 march to the Miraflores presidential palace in Caracas, unless the election board allows the referendum to remove Maduro, also cast doubts on the possibility of a agreement between the country’s dueling political factions.

However, on Thursday, two days after the opposition's two-time presidential candidate Capriles said the opposition would boycott the talks, another MUD leader Jesus Torrealba that the Venezuelan opposition would take part in a Vatican-led dialogue. Alternatively, he said, Maduro’s government and the Democratic Unity Roundtable (MUD) could agree on a constitutional amendment authorizing early general elections.

President's opponents suspect him of attempts to buy time and delay the recall process. As the Constitution states, if the referendum is held before January 10, it may trigger a new election. If it is delayed beyond year-end, then Maduro still can be forced from office but only to be succeeded by his vice president.

The only other presidential recall ever attempted in Venezuela took place in 2004, but only after three failed petitions.