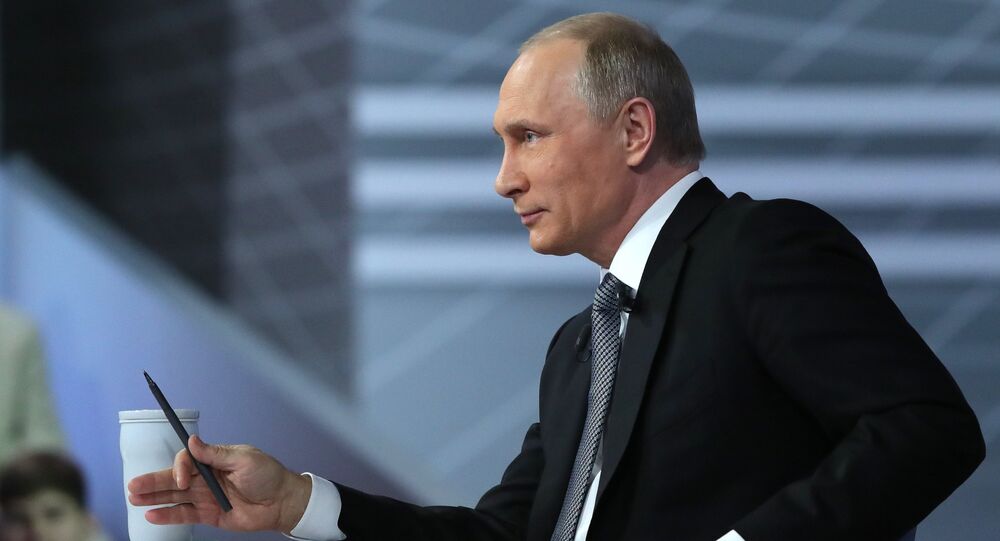 WASHINGTON (Sputnik) — On Thursday, Putin made the comments in his annual televised question-and-answer session with the Russian people. In his comments, Putin listed examples of cooperation with the United States, including the fight against terrorism.

But Putin expressed doubts about the possibility of established figures in the United States being removed from power and continuing influence. He cited as examples of political longevity the success of the Bush and Clinton families and their loyalists in repeatedly winning and holding high office.

"What President Putin is referring to is the neo-conservative/liberal within the National Security State (NSS) that has set the strategic goals of US foreign policy since the end of the Cold War, author and terrorism expert Beau Grosscup said on Friday.

Grosscup said the alliance of policymakers and their supporters had largely focused around the political leadership of the Bush and Clinton families over the past decades in the US Republican and Democratic parties.

"Any US president heads the National Security State bureaucracy. So yes Putin is correct."

US policymakers had approved limited cooperation with Russia in fighting Islamic terrorists over the past quarter century, but that alliance had frayed in recent years, Grosscup maintained.

In counter-terrorism cooperation, Washington and Moscow have joined in battling their commonly designated terrorists since the last years of the Soviet Union, "principally the Islamic fundamentalists who in Chechnya threaten to break away from Russia and attacked the United States on September 11," he observed.

However, Russia has not cooperated in the US "regime change" policy conducted in the name of counter-terrorism, Grosscup, who is California State University Political Science Professor, continued.

"Syria is the latest example of this as Putin and the US National Security State find themselves on the opposite side on the issue of [Syrian President Bashar] Assad."

The continued power of militaristic hawks in the Obama administration had generated a dangerous level of distrust and tension between the United States and Russia driven by Washington policymakers, University of Illinois Professor of International Law Francis Boyle warned.

"The situation is still extremely dangerous. We know for a fact that the United States is still continuing its military escalation off the borders of Russia. So far I have not seen any stand down from what I deem to be very hostile aggressive maneuvers by US and NATO military forces against Russia," Boyle noted.

Boyle also claimed that the highly publicized confrontation this week between a Russian helicopter and the US guided missile destroyer Donald Cook in the Baltic Sea had been caused by the American vessel’s close proximity to the major Russian naval center at Kaliningrad.

US claims of attacks by Vietnamese gunboats on that occasion were used by the Lyndon Johnson administration as the justification for massive US intervention into the Vietnam War.