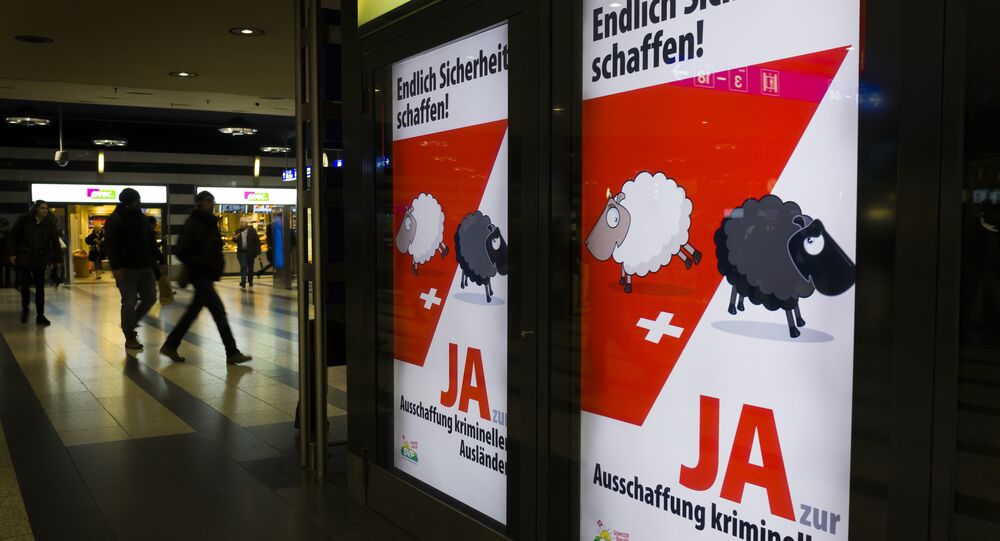 The Swiss-based ABB multinational corporation dealing with robotics and power technology notes the importance of foreign employees amid Sunday's referendum on the controversial proposal on expulsion of foreign nationals in case they break the country's law, ABB Group spokeswoman Sandra Wiesner told Sputnik.

MOSCOW (Sputnik) — The citizens of Switzerland voted earlier in the day in the nationwide referendum to decide among other issues whether foreign nationals who reside in the country should be automatically deported if found guilty of committing a crime, ranging from murder to speeding. The latest estimates in favor of the initiative stand at 41 percent.

"The 125-year success story of ABB in Switzerland is closely linked to the fact that international specialists and talents come to Switzerland. In order to remain competitive and innovative in an increasingly global competition, ABB is dependent on the right combination of Swiss and international professionals and therefore on the attractiveness of Switzerland," Wiesner said.

© AFP 2021 / FABRICE COFFRINI
Swiss Population Votes Against Initiative on Foreigners' Expulsion
The spokeswoman explained that hundreds of employees from over 40 countries work "intensively on the development of breakthrough technologies and innovations that are changing the world" in ABB's research center in Dattwil, Switzerland.

The initiative on expulsion of foreigners was proposed by the anti-immigration Swiss People’s Party, currently having the most seats among all parties presented in the National Council taking into consideration the fact that foreigners constitute almost one-quarter of the country's population.

Over five million people were eligible to vote in Switzerland, while some two million foreigners living in the country could not take part in the referendum.