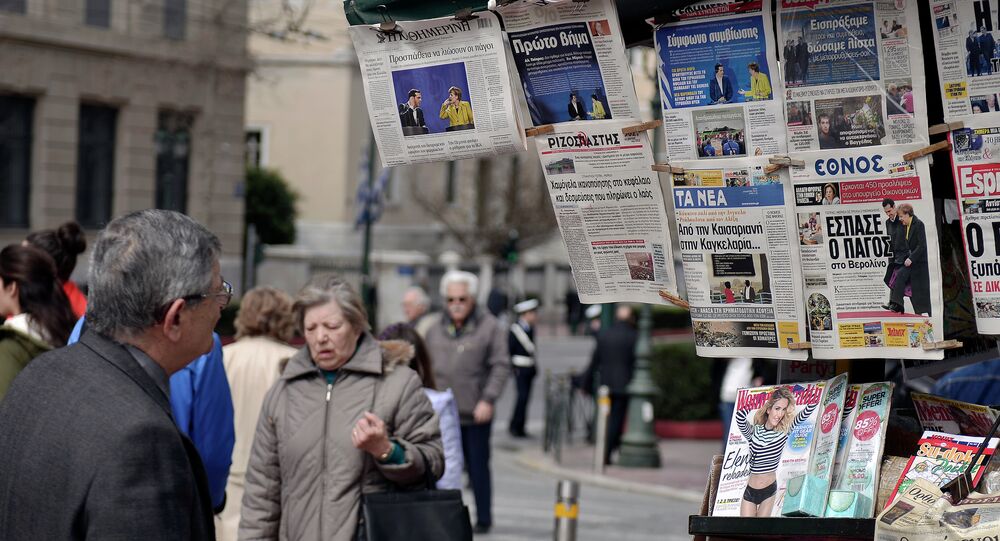 People in Greece would like to access information from sources other than corporate-owned Western media, Greek journalists told Sputnik.

MOSCOW (Sputnik) — A poll carried out by ICM Research exclusively for Sputnik and published Tuesday revealed that every eighth Greek resident surveyed expressed interest in alternative coverage of the world events. Just two percent of Greeks said they had no interest. ICM Research interviewed more than 1,000 people in Greece between March 20 and April 9, 2015.

"As a whole the Greek mass media broadcast the news they take from the Western news agencies or from the Western media. And the general public opinion is that the information is unbalanced and unilateral," Athanassios Argyrakis, a reporter with the Eleutheros Typos newspaper, told Sputnik.

© AFP 2020 / LOUISA GOULIAMAKI
Over Half of EU, US Citizens Want Alternative Views on Global Events - Poll
The fact that survey figures are so high is logical, Argyrakis said. When Greek media, particularly newspapers and websites, take information from other sources, like Russian ones, it is welcomed, he suggested.

"People have already understood that what they are receiving now is fully unilateral," Leonditsi noted.

© AFP 2020 / LOUISA GOULIAMAKI
Coverage of Ukraine Conflict Erodes Greeks' Trust in European Media
As Russia's relations with the West deteriorated amid Ukraine conflict, many US and European media outlets adopted a one-sided approach to covering events in Ukraine.

An earlier ICM poll, published in April, revealed that some 54 percent of respondents in the United Kingdom, France, Germany and Greece did not trust mainstream media when it came to the coverage of the Ukrainian crisis.