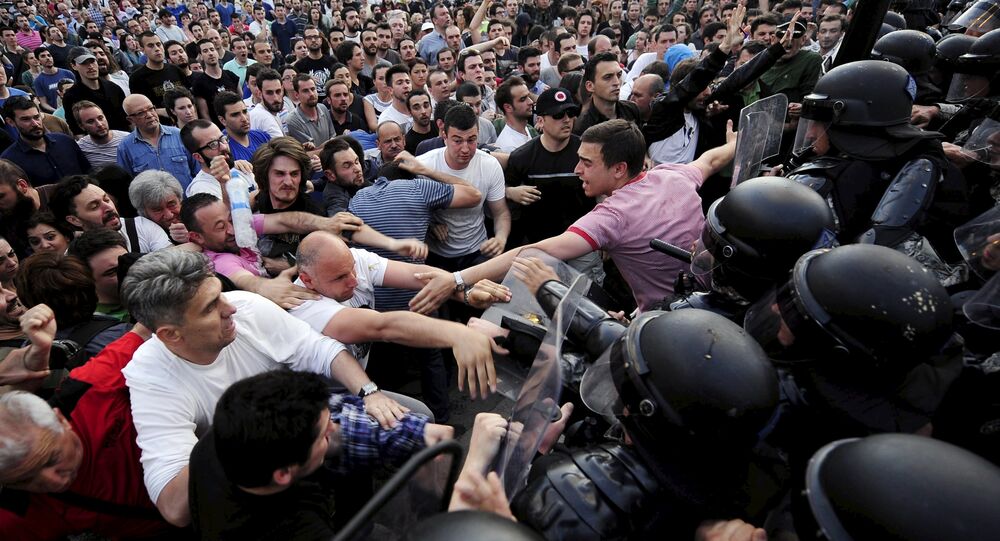 © REUTERS / Ognen Teofilovski
Clashes in Macedonia Raise Concerns Among NATO, EU Members
MOSCOW (Sputnik) — On May 9, Macedonia witnessed violent clashes between police and an armed group in Kumanovo, a city bordering Serbia and Kosovo, which claimed the lives of eight Macedonian security officers and 14 gunmen.

"Albanians are used to hinder [the implementation of] the Turkish Stream [project] and as a US method of putting pressure on Europe by fomenting a new conflict in the Balkans," Dusan Prorokovic told Sputnik Tuesday.

According to Prorokovic, renewed Albanian insurgency in Kumanovo is likely to be orchestrated by the United States and its NATO allies to derail Moscow's pipeline plans.

© REUTERS / Ognen Teofilovski
Serbia Reinforces Borders After 5 Macedonian Policemen Killed in Clashes With Terrorists
The new pipeline is expected to pass through Turkey to a gas hub on the Turkish-Greek border for further distribution to consumers in southern Europe.

Kumanovo was an epicenter of fighting between Albanian rebels, who originated from Kosovo, and government forces in 2001.

In April, a group of some 40 gunmen, reportedly linked to the KLA, took over a police station in the northern Macedonian village of Gosince. The armed men called for the establishment of an Albanian state.

About a quarter of Macedonia's two-million population is made up of ethnic Albanians. Relations between Macedonians and the Albanian minority soured after the government suppressed Albanian insurgency in Tetovo, near the border with Kosovo in 2001.