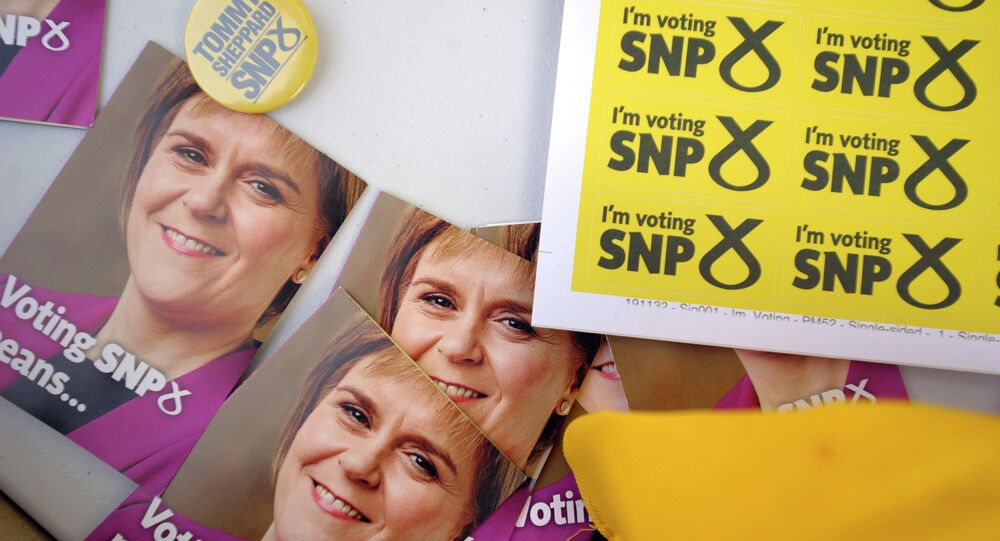 Scottish National Party has been campaigning successfully with latest polls in the run-up to the UK general election predicting it may win all 59 Scottish seats in the UK parliament.

ELGIN (Sputnik), Anastasia Levchenko — Strong presence of the Scottish National Party (SNP) at Westminster after the May 7 general election may lead to a democratic shift in the very principles of UK governance, SNP campaign director Angus Robertson told Sputnik in an interview.

The SNP party has been campaigning successfully with latest polls in the run-up to the UK general election predicting it may win all 59 Scottish seats in the UK parliament.

"The SNP MPs who will be elected will force decision-makers in the three UK parties [Conservatives, Labour, Liberal Democrats] to reassess their approach to Scotland and to governance in the UK," Robertson said.

"The SNP can win this elections, which means coming first, and that is a hugely significant development if it happens, because the best results the SNP has ever had is achieving 30 percent of the vote, and only 11 of Scotland's members of parliament at Westminster," Robertson added.

Such major changes would mean not only a reassessment of powers that the UK countries have, but also reforming the parliament in a more democratic way, according to Robertson.

"It is taking a long time for the establishment parties in London to understand that there has to be a significant reform in terms of the nations and regions of the UK. But there also needs to be a wider democratic reform — we have an electoral system, which is not properly representative, and we have a parliamentary situation which is medieval, as the second chamber is not elected," Robertson said.

"There is understanding in Scotland that we can exercise power and influence in a way that we have not been able to in the past."

The UK media tends to marginalize the coverage of the Scottish National Party (SNP) campaign in the run-up to the general elections in Britain, SNP campaign director believes:

"Now we have the opportunity for the first time ever to win in Scotland in Westminster elections, in the context that has always been historically difficult for us, because mostly the media coverage emanates from the UK-wide broadcasters in London, who often marginalize coverage about the SNP."

Cooperation between the parties in the UK parliament on a vote-by-vote basis is the most likley outcome of the approaching May 7 general election, the Scottish National Party's campaign director Angus Robertson told Sputnik in an interview.

In the absence of a clear leader ahead of the general election on Thursday, the three possible outcomes are a formal coalition, a so-called confidence and supply agreement between the parties, and cooperation on a vote-by-vote basis.

© REUTERS / Russell Cheyne
Scottish National Party to Win All Scottish Seats at UK General Election
Robertson supposes  the most realistic of the three possibilities is working on a vote-by-vote basis.

"This, of course, is not ususal for Westminster. It is difficult for the UK political parties who are used to be able to govern with majorities, although they may not be supported by a majority of the electorate," Robertson said.

The rise of the smaller parties, and the SNP in particular, leads the British parliament toward a more democratic governance, according to Robertson.

"If nobody has a majority, nobody should be able to exercise a monopoly of power in parliament and government," the SNP campaign director said.

Both major UK parties, the Labour and the Conservatives, are polling at around 33 percent, which is not enough for a majority government.

So far, the both parties have been skeptical about entering into a formal coalition.

A confidence and supply agreement is less formal than a coalition and implies that a smaller party supports the larger one in its budget proposals and votes of confidence. It allows a party that could not gain an absolute majority to implement its policies, while also letting the smaller party play its role in the parliament.

A vote-by-vote cooperation is the least binding for the participants and allows the parties to keep their stance unchanged on disputable issues. The Labour leader Ed Miliband expressed willingness to have a vote-by-vote partnership with the SNP during a Q&A session last week.