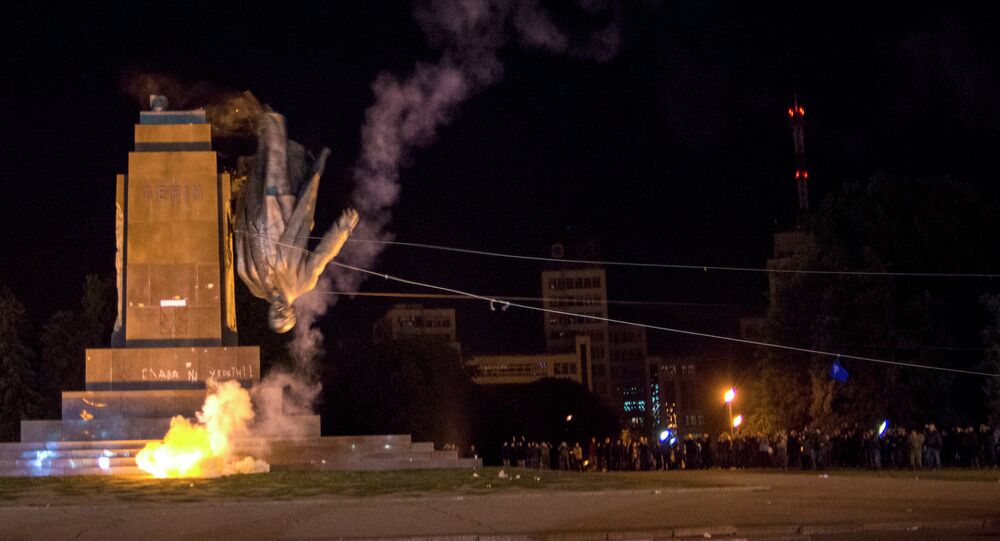 As Ukrainian radical activists continue to pull down monuments to Vladimir Lenin, it is time to look beyond the tip of the iceberg, explain the true reason behind this vandalism and reveal the orchestrators’ plans.

Groups of activists, burning with a passion for destruction, have demolished at least seven monuments to Vladimir Lenin this week.

The Euromaidan proponents’ battle against the most well-known revolutionary is gaining momentum. According to Leninstatutes.ru, 637 Lenin monuments in Ukraine have been torn down since December 8, 2013.  The Dnepropetrovsk Region has set the record for the number of removals – 76. There are still 1,500 Lenin monuments in Ukraine. The city of Kharkov has the largest number with 25 statues.

What drives the vandals? At first glance, the main reason is that the team that seized power in the February coup is erasing the Soviet period from Ukraine’s history, along with other acts of turning the past upside down.

With the tacit approval of the authorities and police turning a blind eye to this vandalism, nationalists and hooligans feel absolutely free to assault the Soviet leader’s statues.

The most ridiculous fact about the “De-Leninization” is that it is directed against the man who enlarged Ukraine’s territory with vast swathes of land, including the parts or the whole areas of existing Kharkov, Donetsk, Lugansk, Zaporizhia, Kherson, Sumy, Mykolaiv and Dnepropetrovsk regions.

However, vandals do not pay ny respect to Lenin’s generous gift.

As the economy is on a highway to shambles and the government cannot fulfill its promises and improve citizens’ lives, it is desperate to create an external enemy to shift the blame on.

First, dragging the Soviet period through the mire is an accepted practice in today's Ukraine.The helpless Lenin seems an ideal figure for that, and here is why.

Second, as Russia became the USSR’s successor, Lenin is associated with the Kremlin more than with any other post-Soviet republic. Therefore Ukrainian nationalists, brainwashed by Ukrainian propaganda demonizing Moscow, can now take out their frustration on Lenin, the symbol of both “Soviet and Russian occupation”.

© Sputnik / Iliya Pitalev
Erasing Own History: Soviet-Era Monuments Torn Down in Ukraine (VIDEO)
Directing crowds’ fury against this symbol is advantageous for Kiev, as this vandalism against the “occupant” releases a bit of pressure and deflects people’s anger away from Petro Poroshenko’s team, even though the “enemy” is imaginary.

Therefore it is no wonder that crowds make a show of any demolition. The violent dismembering of an enemy’s monument produces a feeling of victory over him, similar to that of a voodoo doll.

But there is an important fact: Lenin remains popular with retirees. An opinion poll by Research & Branding suggests that 69 percent of Kiev residents viewed the demolition of a local Lenin monument in December 2013 as “negative” and 67 percent described it as an act of vandalism.

As a result, those demolitions create an additional generational gap. On the one hand, young nationalists are more and more united, yet on the other hand, the abyss between them and the senior generation is growing. It creates the foundation for more social unrest and splits the society: and a fragmented society is way more controllable than a solid one.

​According to French sociologist Gustave Le Bon’s mass theory, a society is stable when its so-called cultural core is stable. One of this core’s essential components is ideology. Communism has never been an ideal paradigm, but it managed to serve as an ideological pillar in the USSR. Now, Kiev is doing its best to eradicate its traces, and the “genocide” of Soviet leaders’ monuments is facilitating this.

However, it could be possible to assume that Kiev ideologists are trying to fill the empty space and inculcate a new ideology. But nationalism hardly seems a wise choice.

Kiev has attempted to ban the Communist party and has put its chief under pressure, considering them as a key opponent.

History knows a notorious example of a similar string of events. In 1933, Hitler banned the Communist Party of Germany accusing it of setting the Reichstag on fire and thus disposed of an opposition group. Everyone knows what happened next.

Lenin monuments in Ukraine are defenseless. But does a nation that tries to erase its past have any future?