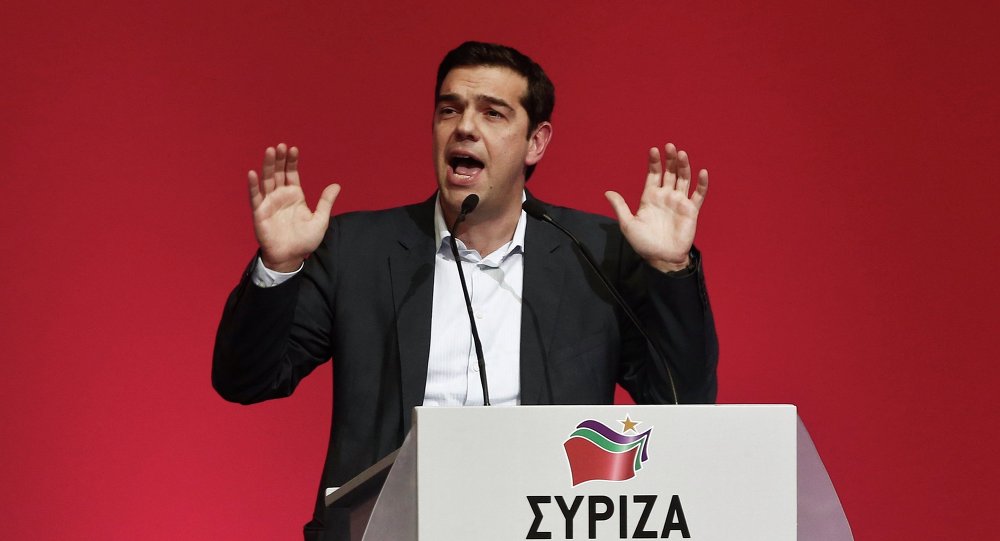 Because of Brussels' blustering, the Euro is in a perilous position. Marine Le Pen, PEGIDA, Golden Dawn don't even have to recruit any more as Merkel and Draghi provide all the marketing they need. The future of Europe lies directly in the hands of one man, Alexis Tsipras.

© AP Photo / Kostas Tsironis
Greece Has 'Plan B' if EU Does Not Offer New Debt Deal - Defense Minister
Andre Alessandro – The unfolding events between Greece and Europe have more drama than a Mexican telenovela. Day after day, the populace of Europe watches their gilded elites gamble with their finances and the future of the Euro.

Boisterous “What Ever It Takes” Mario Draghi and Merkel are trying to 'parent' Greece before its contagion rips all of Europe apart. The children of Athens have grown up though, after nearly seven years of austerity, massive unemployment, and a return of nationalism. Now, they are muddling their way into adolescence. Syriza's rejection of the status quo and its demands for a “Grexit” are its first real protestations, a youthful rebellion.

Unfortunately for the Troika, they know their threats are baseless. Greece's departure would signal an end to the EU as we know it today. Italy and Spain would not be far behind in raising similar demands seeing how their Southern neighbors were able to negotiate for a preferable debt deal.

A “Grexit” will cost Europe, especially Germany, untold amounts. Some reports have priced the damage of a “Grexit” at almost $1.2 trillion. Since the creation of the Euro, Germany became the final holder of European risk in order to maintain the status quo. Billions and billions of worthless sovereign debt was purchased by the German taxpayer to keep their export economy alive. Draghi and Merkel have even engineered this latest round of quantitative easing in an attempt to monetize more debt, hoping to kick start the economies of the South. It all may all be for naught though if they fail to prevent a “Grexit”

The Euro is in a perilous position, deflation is unavoidable, austerity has ravaged the periphery and nationalism is sweeping across the continent all because of the blustering of Brussels. Marine Le Pen, PEGIDA, Golden Dawn don't even have to recruit any more as Merkel and Draghi provide all the marketing they need. The future looks grim for Europe and its continuance lies directly in the hands of one man, Alexis Tsipras.

The tie-less leader has stayed true to his word so far to fight for the survival of his countrymen. Only today, he proclaimed “We will keep our pre-election promises. This is non-negotiable.” Tsipras knows the damage his country's exit would have on the fragile EU and is standing firm in the face of the Troika's bluffs. The decision to leave is not his first choice, as his preference is for Greece to stay in the Euro and to have its debt restructured. However, he knows that Syriza's mandate was not to give into demands like his predecessors government did, but to emerge with a clean slate, ready to grow and put his country back to work.

In just under a week, Emergency Liquidity Assistance (ELA) will be put to an end by the ECB. At this point, Greek banks will no longer be able to fund themselves. It will be here where the soap opera comes to an end. Either the Troika will capitulate, giving into the demands of Greece and allowing them to restructure their debt, or a “Grexit” marking the season finale for the Euro and the beginning of a painful rebirth for Greece.

Gold on the Rise as Greece Concerns Rattle European Markets