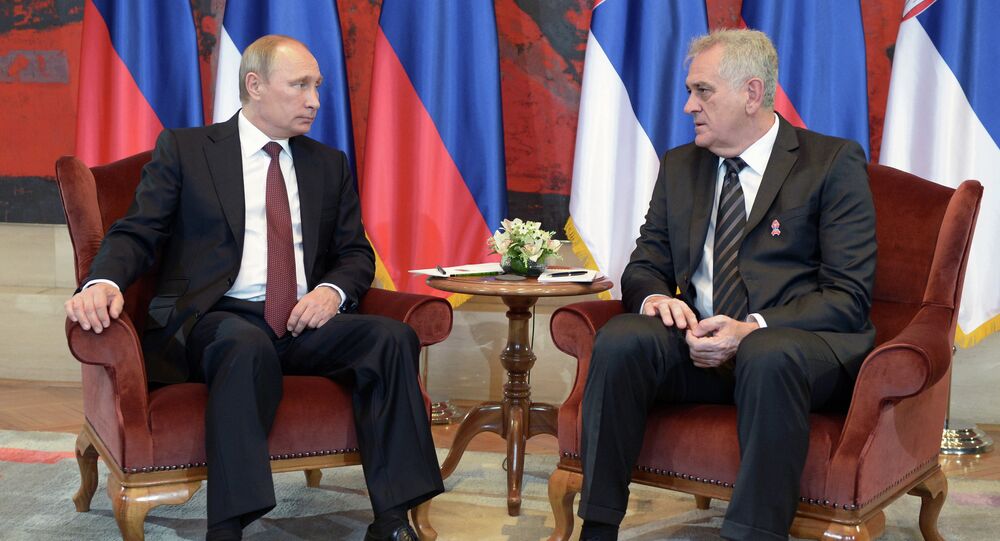 Experts express growing concerns regarding the EU’s efforts to force Serbia to impose sanctions against Russia. Brussels is 'blackmailing' Belgrade into joining its sanctions program by threatening to postpone Serbia's EU membership.

MOSCOW, November 21 (Sputnik), Ekaterina Blinova — While Johannes Hahn, the EU Commissioner for Enlargement and Neighborhood Policy is urging the Serbian leadership to join European sanctions policy against Russia, experts express their deep concerns regarding the attempts of Brussels to "blackmail" Belgrade and raise the question of the price Serbia will pay if it withstands the pressure.

© Sputnik / Vladimir Sergeev
Western Sanctions Could Boost Russian Production: Serbian Radical Party
Johannes Hahn has repeatedly called upon Belgrade to impose sanctions on Russia. Hahn told the European lawmakers that if Belgrade "is moving towards accession, the signal will have to be the right one" on sanctions against Russia, Radio Free Europe/Radio Liberty reported on September 30, 2014.

Last Friday, November 14, during a press conference in Brussels Mr. Hahn stressed that "when Serbia joins the EU it will have to align itself with our [EU] foreign policy and decisions." He underscored that the countries seeking EU membership "decide on the pace of their accession themselves, through their reforms," referring to Serbia's firm intention to join the EU.

"At the same time it is less about taking EU laws, and more about changing the culture and the thinking, as well as providing evidence those changes are sustainable," he said as quoted by Tanjug, a Serbian news agency.

During an official visit to Belgrade, on November 20, 2014, the EU Commissioner has again raised the issue of sanctions. In an interview with the Serbian Vecernje Novosti newspaper, Mr. Hahn stressed that since Belgrade declared EU accession as its "key objective," its foreign policy should be closely aligned with that of the European Union.

"Presently the European Union is trying to force Serbia, which is not an EU member, to join their sanctions program. They are practically blackmailing Serbia: either it joins the sanctions against Russia or [the bloc] won't see it as a country with a chance of joining the EU," points out Russian MP Aleksey Pushkov as quoted by RT.

Dr. Gerhard Mangott, a Professor of Political Science at the University of Innsbruck and Scientific Adviser on Post-Soviet Affairs at the Austrian Institute for International Affairs (OIIP), asked Johannes Hahn on Twitter:

@JHahnEU @MiKarnitschnig Why is that? Doesn't Serbia have the right to its own policy trying to shape EU opinion once it becomes a member?

"I heard from Hahn the same you did — that Serbia is not an EU member, that it is independent in conducting its foreign policy, but that EU membership would mean an obligation to conduct a common foreign policy. [Serbia] "today, these hours, these years, will certainly not impose sanctions on Russia," President Tomislav Nikolić told reporters as quoted by Tanjug.

© RIA Novosti . Aleksey Nikolskyi
Serbia Rules Out Sanctions Against Russia
In an interview with the Rossiya-1 broadcaster in October 2014 the Serbian President emphasized that he was not afraid of Serbia's EU accession being postponed. Expectations are that the country will join the EU not earlier than in 2020, as this year Johannes Hahn announced that there would be no EU "enlargement during his five-year mandate," according to Radio Free Europe/Radio Liberty.

Although Tomislav Nikolić asserted that Serbia would "definitely not introduce sanctions" against Russia in the coming years, he also admitted that civilians should prepare for all "the sacrifices" the state will have to make when it becomes a member of the European Union, Beta News, a Serbian newspaper reports.

Experts note that Brussels and Germany are extremely interested in involving the Balkan countries into the EU political and economic fold and are unlikely to postpone Serbia's EU membership for long. "In the long term, we want the western Balkan countries to become members of the European Union. It's our common economic, political and strategic interest," said Angela Merkel, the Chancellor of Germany, during a meeting of eight regional leaders in Berlin in August, as quoted by Bloomberg. The media outlet points out that "Merkel is seeking to guard a push for EU influence in a region," adding that some German officials expressed their growing concerns regarding the strengthening of the Russo-Serbian cooperation.

jamdesign
US, EU Discuss More Sanctions Against Russia: US Administration Official
"While EU nations account for 64 percent of Serbia's foreign trade and 72 percent of investments, Russia has expanded its economic ties with the region's most populous country since 2013," Bloomberg elaborates, adding, that "Russian annual investment in Serbia rose 144 percent to 45 million euros ($56 million) in 2013."

Still, Serbia's economy is largely dependent on the EU: two-thirds of all foreign investment attracted by the country is from EU member-states.
The West may try to force Serbia to join the European sanctions policy preventing further rapprochement between Moscow and Belgrade, using both economic and political instruments. In a similar situation, both Brussels and Washington have already begun a political campaign against Hungary's leadership, which confronts a "Cold War-style standoff" initiated by the West against Russia.

© REUTERS / Yves Herman
EU Foreign Ministers Not Discuss ‘Red Line’ for New Sanctions Against Russia
"Our job is to determine our own interests and own position. I am convinced that putting the question of whose side we should take is a Communist kind of question. The question we should pose is what the Hungarian interest is and not whose side we should take," said Hungary's Prime Minister Viktor Orban as quoted by Reuters, claiming that Budapest would develop collaboration with both EU and Russian Federation.

In response, Washington has banned six Hungarian public officials from entering the United States, "citing corruption allegations." Furthermore, The Economist has reported on anti-government protests in Budapest that brought together about 10,000 civilians, "encouraged by America's rising criticism of their government." The media outlet emphasizes that the EU and the US are dissatisfied with Hungary's current political course. "Concerns are growing inside Fidesz [Hungary's ruling party] about the wisdom of taking on the world's superpower," the Economist notes, adding that Hungary "is losing friends and allies."

Hungary's example once again shows that the EU member-states are evidently unable to conduct an independent foreign policy or establish economic ties with other countries without Brussels' or Washington's approval. The question remains open whether the US and the European Union will carry out a similar scenario in Serbia targeting the ruling elite or will continue threatening Belgrade with the postponement of its EU membership.