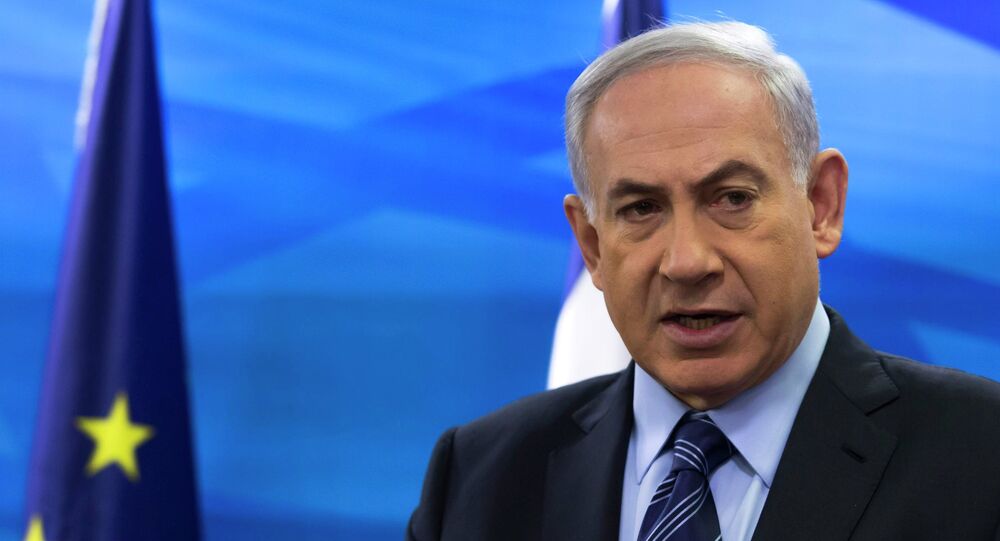 Taking a hardline stance with remarks that protesting Arab Israelis should "move...to the Palestinian Authority," Prime Minister Benjamin Netanyahu seeks to placate the political right in his country ahead of elections.

MOSCOW, November 12 (Sputnik) — Facing threats to his political future amid growing violence across the country, Israeli Prime Minister Benjamin Netanyahu has taken a hardline stance, with experts concluding that the PM’s controversial remarks are based on a desire to placate the country’s political right ahead of elections.

Speaking at a regular meeting of the Likud party on Monday, Netanyahu said that the Arab Israelis currently “demonstrating and shouting their denunciation of Israel and support of a Palestinian state” should “move there — to the Palestinian Authority or to Gaza.” The Prime Minister added that “I have given instructions to use all of the means at our disposal, including passing new laws, including destroying terrorists’ homes, and other measures,” the Times of Israel quoted him as saying.

Netanyahu’s remarks come amid growing sectarian violence which has included gun, bomb, car and knife attacks, as well as protests by Arab-Israelis in the country’s north and in Jerusalem.

Friday’s killing by Israeli police of a 22-year-old Palestinian in the northern Israeli town of Kfar Kanna drew up to 2,000 protestors over the weekend. Video footage captured the young man banging on a patrol car’s window with a knife before backing away, after which he was fatally shot. The police officers have been reassigned, but are yet to be reprimanded.

The killing comes amid a series of attacks on Israeli civilians taking place all over the country in recent weeks. Al-Jazeera America notes that the recent violence invokes memories of Palestinian intifadas, while adding that at present they do not match the scale or political coordination of the earlier uprisings. The Associated Press has noted that the car and knife attacks by lone Palestinians “do not appear to be linked or organized by any specific group,” commenting that this may make Israeli security forces’ efforts to crack down on the violence more difficult.

The recent violence has been attributed to Israeli land grabs in eastern Jerusalem, as well as government rhetoric about revising a 1967 agreement on Jerusalem’s Temple Mount, known by Muslims as the Noble Sanctuary, which is administered by Jordan. Israeli Housing Minister Uri Ariel has proposed the construction of a third Jewish Temple on the holy site, while the government has recently restricted Muslims’ entry to the territory. Palestinian President Mahmoud Abbas urged Palestinians to block entry to the Jewish prayer sites and to defend the Muslim holy site “by all means”. Netanyahu quickly blamed his Palestinian counterpart for the resulting upsurge in violence, noting that it is “a direct result of [Abbas’] incitement.” Netanyahu added Monday that Israel “will act against those who throw stones, block roads and call for the establishment of a Palestinian state in place of the state of Israel.” The Prime Minister also said that his country is now “in the midst of a struggle for Jerusalem, and I have no doubt that we will triumph. We are deploying all the forces that we can. It could be a prolonged struggle, and we need to unite the entire nation behind it."

Prime Minister’s Comments in Line with Israeli Political Right, Line Him Up for Elections

Foreign Minister and ‘Israel Our Home’ party chairman Avigdor Lieberman added fuel to the fire on Monday by noting that Arab-Israelis in the country’s northern Arab-majority Triangle “must understand that if there is an agreement [on the establishment of a Palestinian state], they will not be citizens of the State of Israel.” The minister added that Arab Israelis shouldn’t count on social support “while raving and inciting against the state. I think that today this is clear — they must be on the other side of the border,” the Times of Israel quoted him as saying. Lieberman is set to challenge Netanyahu in elections expected to take place in 2015, his party quickly gaining on Likud in the polls.

On Monday, Netanyahu also gained a challenger from his own party’s right wing. Former Deputy Defense Minister Danny Danon told reporters that while “the prime minister is saying rightwing things in recent days, he is faking. He is just looking for votes.” Danon was fired by Netanyahu in July of this year for criticizing the PM’s handling of the military operation in Gaza, where he wanted the military to ‘finish the job’ there. He has also criticized Netanyahu for the freeze in Jewish settlement construction, the release of Palestinian prisoners, and on social issues, the Jerusalem Post has explained. JP and the Times of Israel have noted that Danon is unlikely to defeat Netanyahu in Likud party primaries, which are scheduled for January 6.

The Christian Science Monitor noted that Netanyahu’s tough talk is “geared at securing a fourth term as prime minister,” with Haaratz agreeing, noting that “more than anything, Netanyahu’s current extremism tells of coming elections.” Al-Jazeera notes that the present minority government has faced difficulties passing legislation and that Netanyahu has found it hard keeping a restive and critical cabinet under control. With Likud having little prospect of attracting voters from the left and center, Al Jazeera concludes that “Israeli electoral math suggests that Netanyahu’s prospects for re-election depend on energizing the right and its religious allies.” CSM noted however that Netanyahu’s tough rhetoric is risky, noting that “he may be listening more closely to right-wing leaders aiming to outflank him.”

An analysis by Reuters noted that Netanyahu’s shift to the right also comes at the cost of alienating international partners. Several European countries plan on following Sweden’s lead in recognizing the Palestinian state. Meanwhile Israel’s “new horizon”, the hoped-for cooperation with neighboring countries to combat the threat of Islamic extremism, now also seems unlikely. Jordan’s Ambassador to Israel withdrew earlier this month over Israel’s incursions into the holy sites, and relations with Egypt and Saudi Arabia have also cooled.

In the midst of heightened tensions and rhetoric, Israeli President Reuven Rivlin has urged calm, appealing for dialogue, noting that these “difficult days…demand of us unity and strength in the face of the perpetrators of terror,” AP reported. He added: “I call on all elected officials, all our leaders, from all across the political spectrum, to stand united.” President Rivlin, a moderate in the Likud faction, has been more open to dialogue with the Palestinians this year, noting last month at a memorial ceremony for the 1956 killing of 49 Arab Israelis that “we are destined to live side by side and we share the same fate.”

An unnamed official from the Arab-Israeli municipality of Sakhnin told local radio that “if the prime minister does not take responsibility and talk to Arab residents as equal citizens, then the atmosphere will not calm down,” CSM quoted him as saying. Arabs make up about 20 percent of Israel’s eight million population.

Arab-Israeli Hadesh party leader Mohammad Barakeh responded to Netanyahu’s comments with some rhetoric of his own, noting that the Prime Minister “can’t cancel our citizenship because we are in our land, Palestine,” adding that “our homeland is not a Zionist gift,” the Times of Israel noted.

Ahmad Tibi, the leader of the Knesset’s Arab Movement for Change party, told Reuters that Netanyahu’s comments signify that he has “gone off the rails."

Kafr Kazim Mayor Adel Badir noted that “instead of the government trying to calm things and invest in Arab towns, it talks about Arabs leaving,” adding that “the state says, ‘You are a guest,’ but we were here before the state existed – this is our land. We are not visitors here.” Badir added that Netanyahu “should speak directly to the Arabs with respect, like he does with the Jews.”

Sakhnin Mayor Mazen Ganaim said that “we Arabs want to calm the situation,” adding that “the role of the prime minister is to defend all citizens, and it is unfortunate that he said this,” the Jerusalem Post reported.